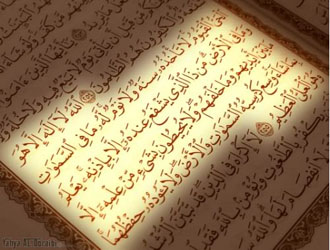 During the life of the Prophet (PBUH) (570-632 CE)
•  The Prophet  used to recite the Qur’an before angel Jibreel (Gabriel) once every Ramadan, but he recited it twice (in the same order we have today) in the last Ramadan before his death. Jibreel also taught the Prophet  the seven modes of recitation.
•  Each verse received was recited by the Prophet, and its location relative to other verses and surahs was identified by him.
• The verses were written by scribes, selected by the Prophet, on any suitable object – the leaves of trees, pieces of wood, parchment or leather, flat stones, and shoulder blades. Scribes included Ali Ibn Abi Talib, Mu’awiyah Ibn Abi Sufyan, Ubey Ibn Ka’ab, Zayed Ibn Thabit.
•  Some of the companions wrote the Qur’an for their own use.
•  Several hundred companions memorized the Qur’an by heart.
During the caliphate of Abu Bakr (632-634 CE)
•  Umar Ibn Al-Khattab urged Abu Bakr to preserve and compile the Qur’an. This was prompted after the battle of Yamamah, where heavy casualties were suffered among the reciters who memorized the Qur’an.
•  Abu Bakr entrusted Zayed Ibn Thabit with the task of collecting the Qur’an. Zayed had been present during the last recitation of the Qur’an by the Prophet to Angel Jibreel (Gabriel).
•  Zayed, with the help of the companions who memorized and wrote verses of the Qur’an, accomplished the task and handed Abu Bakr the first authenticated copy of the Qur’an. The copy was kept in the residence of Hafsah, daughter of Umar and wife of the Prophet.
During the caliphate of Uthman (644-656 CE)
•  Uthman ordered Zayed Ibn Thabit, Abdullah Ibn Al Zubayr, Saeed Ibn Al-Aas, and Abdur-Rahman Ibn Harith Ibn Hisham to make perfect copies of the authenticated copy kept with Hafsa. This was due to the rapid expansion of the Islamic state and concern about differences in recitation.
•  Copies were sent to various places in the Muslim world. The original copy was returned to Hafsa, and a copy was kept in Madinah.
Three stages of dotting and diacritization
•  Dots were put as syntactical marks by Abu Al-Aswad Al Doaly, during the time of Mu’awiya Ibn Abi Sufian (661-680 CE).
•  The letters were marked with different dotting by Nasr Ibn Asem and Hayy ibn Ya’amor, during the time of Abd Al-Malek Ibn Marawan (685-705 CE).
•  A complete system of diacritical marks (damma, fataha, kasra) was invented by Al Khaleel Ibn Ahmad Al Faraheedy (d. 786 CE).