How Do You Benefit From the Qur’an 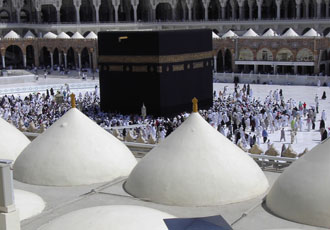 Verily, therein is indeed a reminder for him who has a heart or gives ear while he is heedful. (Qaaf 50:37)

When you desire benefit from the Qur’an, then bring your heart together during its recitation, listen heedfully and have the presence of the one who is being addressed and spoken to, since it is a speech from Him, the Sublime, to you, upon the tongue of His Messenger (sallallaahu alaihi wasallam).

This is because the best and most complete effectis suspended between the following:

1. that which produces the required effect,

2. a place which receives this effect,

3. the condition which is necessary to receive such an effect and

4. the absence of that which prevents this effect from being obtained.

This verse has included all of the above with the most concise and clear of wording, which is most direct in expounding the intended meaning.

His speech: (Verily, therein is indeed a reminder…) is an indication of what has preceded from the beginning of Surah Qaaf to the present and this constitutes that which produces the desired effect.

And His speech: (…for him who has a heart…) this is the place which receives the effect and what is desired by it is: a living heart which understands from Allaah, just as the Exalted has said:

It is but a Reminder and a Manifest, Clear Qur’an, that he (Muhammad) may give warning to him who is alive (i.e. the healthy and live heart of the believer.) (Yaa Seen 36:69-70)

And His speech: (…or who gives ear…) the one who directs his listening and the perceptive faculty of his hearing to what is being said to him, and this is the condition of benefitting and receiving the desired effect from the words (that one hears).

And His speech: (…while he is heedful) meaning his heart is present and witnessing, not absent and unmindful.

Ibn Qutaibah said: “Listen to the Book of Allaah, while your heart and understanding are present, not while you are unmindful and forgetful.”

And this is an indication of that which prevents the desired effect [from the Book of Allaah] from being obtained and that is the forgetfulness and absence of the heart from understanding what is being said to it, looking at it with care and pondering slowly and carefully over it.