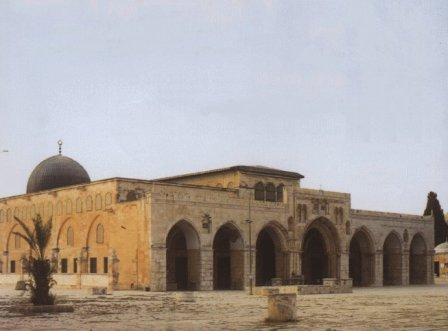 I myself was influenced by my knowledge of the Bible to accept the Prophethood of Muhammad, and have had two Jewish rabbis admitting to me in Speaker’s Corner that Muhammad was the Prophet spoken of in their books. It has long been recognised that a sure sign of the truth of a claim to Prophethood is the ability of that individual to accurately and consistently predict future events. This is especially true of Christians who often demand “what did Muhammad prophecy?”. This is because the Bible lays down this as a means to distinguish a true Prophet from a false . Everybody is able to predict the future sometimes, some are able to get it right a lot of the time, but only someone who is receiving information from the One who has complete knowledge of the future can get it right every time. There are many predictions both in the Qur’an and the authenticated sayings of the Prophet Muhammed that have been fulfilled.

1. The Qur’an says: “Ye shall enter the Sacred Mosque, if Allah wills, secure, heads shaved, hair curt short, and without fear” (48:28). This passage was revealed after the Prophet had been stopped by the Quraish from making ‘Umrah (the Minor Pilgrimage) and a treaty was made between the Muslims and pagans at Hudaybia, six years after the Prophet’s emigration from Mecca. From this position of weakness, in merely two years the verse was fulfilled, Mecca was captured, and the Muslims performed the pilgrimage, shaving their heads, and some cutting their hair.

2. The Qur’an says: “Allah has promised to those of you who believe, and do good deeds, that He will surely grant them in the land inheritance of power as He granted it to those before them; that He will establish in authority their religion which He has chosen for them. And that He will change their state after fear to one of security and peace. They will worship Me alone and not associate aught with Me.” (24:55) And also: “Say to those who deny faith, soon you will be vanquished.” (3:12) and “When comes the help of Allah and Victory, and you see the people enter Allah’s religion in multitudes . . .” (110:1-2) The first verse was revealed at a time of the Muslim’s weakness, promising the righteous victory, and the second predicting the peoples entering into Islam in crowds, and so it came to pass, after the capture of Mecca, and in the time of the Caliphs Abu Bakr, ‘Umar, ‘Uthman and ‘Ali, who were from the most pious companions of the Prophet, were established by Allah in the land, defeating the Persian and Roman empires, so that Islam was established from Spain to parts of China in a mere twenty years. This, in part, fulfills another prophecy of the Qur’an: “It is He who has sent the Messenger with guidance, and the religion of truth, to make it triumphant over all religions.” (9:32) Christianity, Judaism, paganism have never regained any lasting dominance, physically and intellectually since the coming of Islam. The secular philosophies of communism and capitalism are in the process of being dealt death blows. At the present rate of growth Islam will over take Christianity by 2025 in terms of numbers. See also Qur’an 48:18-21 and 1:13, which promise victory and the taking of booty – which were also fulfilled.

3. The Qur’an says: “The Roman Empire has been defeated in a land close by; but they, even after this defeat, will gain victory in a few years. Allah’s is the command, in the past and in the future. On that day shall the believers rejoice, with the help of Allah, He helps whom He wills. And He is the mighty and the most Merciful. It is the promise of Allah. Allah never departs from His promise: but most men understand not. They crave for the outer things of life, but of the hereafter they are heedless.” (30:1-7) The Eastern Roman (i.e. Byzantine) Empire suffered a massive defeat at the hands of the Persians who captured Jerusalem in 614, and after that Egypt and Syria fell, and Constantinople was laid siege to – (“a land close by”). The pagan Arabs delighted in this, as it seemed to signal to them the success of idolatry over the followers of revelation. When this verse was revealed it seemed impossible that Rome would recover. The word, translated “a few”, is bid’a, which actually means from three to nine years. Ubayy, a pagan Arab, wagered Abu Bakr one hundred camels that this would never occur. By the year 623, Heraclius, the Byzantine Roman Emperor, took to the field and vanquished the Persians in a series of battles, culminating in the battle of Niveveh in 627. Ubayy had been killed, so his relatives paid the dept. At this same time the Muslims had been victorious over the pagan Quraish and were rejoicing, as the Qur’an foretold.

————–
Source: Extracted from Material on the Authenticity of the Qur’an: Proofs that it is a Revelation from Almighty God by Abdur-Raheem Green.