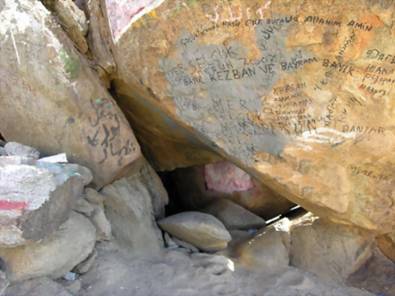 In the Cave of Hira’:
When Prophet Muhammad(P) was nearly forty, he had been wont to pass long hours in retirement meditating and speculating over all aspects of creation around him. This meditative temperament helped to widen the mental gap between him and his compatriots. He used to provide himself with Sawiq (barley porridge) and water and then directly head for the hills and ravines in the neighbourhood of Makkah. One of these in particular was his favourite resort — a cave named Hira’, in the Mount An-Nour. It was only two miles from Makkah, a small cave 4 yards long and 1.75 yard wide. He would always go there and invite wayfarers to share him his modest provision. He used to devote most of his time, and Ramadan in particular, to worship and meditation on the universe around him. His heart was restless about the moral evils and idolatry that were rampant among his people; he was as yet helpless because no definite course, or specific approach had been available for him to follow and rectify the ill practices around him. This solitude attended with this sort of contemplative approach must be understood in its Divine perspective. It was a preliminary stage to the period of grave responsibilities that he was to shoulder very soon.

Privacy and detachment from the impurities of life were two indispensable prerequisites for the Prophet’s soul to come into close communion with the Unseen Power that lies behind all aspects of existence in this infinite universe. It was a rich period of privacy which lasted for three years and ushered in a new era, of indissoluble contact with that Power.

Gabriel brings down the Revelation:
When he was forty, the age of complete perfection at which Prophets were always ordered to disclose their Message, signs of his Prophethood started to appear and twinkle on the horizons of life; they were the true visions he used to experience for six months. The period of Prophethood was 23 years; so the period of these six months of true visions constituted an integral part of the forty-six parts of Prophethood. In Ramadan, in his third year of solitude in the cave of Hira’, Allâh’s Will desired His mercy to flow on earth and Muhammad(P) was honoured with Prophethood, and the light of Revelation burst upon him with some verses of the Noble Qur’ân.

As for the exact date, careful investigation into circumstantial evidence and relevant clues point directly to Monday, 21st. Ramadan at night, i.e. August, 10, 610 A.D. with Prophet Muhammad(P) exactly 40 years, 6 months and 12 days of age, i.e. 39 Gregorian years, 3 months and 22 days.
‘Aishah, the veracious, gave the following narration of that most significant event that brought the Divine light which would dispel the darkness of disbelief and ignorance. It led life down a new course and brought about the most serious amendment to the line of the history of mankind:

Forerunners of the Revelation assumed the form of true visions that would strikingly come true all the time. After that, solitude became dear to him and he would go to the cave, Hira’, to engage in Tahannuth (devotion) there for a certain number of nights before returning to his family, and then he would return for provisions for a similar stay. At length, unexpectedly, the Truth (the angel) came to him and said, “Recite.” “I cannot recite,” he (Muhammad(P)) said. The Prophet(P) described: “Then he took me and squeezed me vehemently and then let me go and repeated the order ‘Recite.’ ‘I cannot recite’ said I, and once again he squeezed me and let me till I was exhausted. Then he said: ‘Recite.’ I said ‘I cannot recite.’ He squeezed me for a third time and then let me go and said:
“Read! In the Name of your Lord, Who has created (all that exists), has created man from a clot (a piece of thick coagulated blood). Read! and your Lord is the Most Generous.’” [96:1-3]

The Prophet (P) repeated these verses. He was trembling with fear. At this stage, he came back to his wife Khadijah, and said, “Cover me, … cover me.” They covered him until he restored security. He apprised Khadijah of the incident of the cave and added that he was horrified. His wife tried to soothe him and reassured him saying, “Allâh will never disgrace you. You unite uterine relations; you bear the burden of the weak; you help the poor and the needy, you entertain the guests and endure hardships in the path of truthfulness.”

She set out with the Prophet(P) to her cousin Waraqa bin Nawfal bin Asad bin ‘Abd Al-‘Uzza, who had embraced Christianity in the pre-Islamic period, and used to write the Bible in Hebrew. He was a blind old man. Khadijah said: “My cousin! Listen to your nephew!” Waraqa said: “O my nephew! What did you see?” The Messenger of Allâh(P) told him what had happened to him. Waraqa replied: “This is ‘Namus’ i.e. (the angel who is entrusted with Divine Secrets) that Allâh sent to Moses. I wish I were younger. I wish I could live up to the time when your people would turn you out.” Muhammad(P) asked: “Will they drive me out?” Waraqa answered in the affirmative and said: “Anyone who came with something similar to what you have brought was treated with hostility; and if I should be alive till that day, then I would support you strongly.” A few days later Waraqa died and the revelation also subsided.

At-Tabari and Ibn Hisham reported that the Messenger of Allâh(P) left the cave of Hira’ after being surprised by the Revelation, but later on, returned to the cave and continued his solitude. Afterwards, he came back to Makkah. At-Tabari reported on this incident, saying:
After mentioning the coming of the Revelation, the Messenger of Allâh(P) said: “I have never abhorred anyone more than a poet or a mad man. I can not stand looking at either of them. I will never tell anyone of Quraish of my Revelation. I will climb a mountain and throw myself down and die. That will relieve me. I went to do that but halfway up the mountain, I heard a voice from the sky saying ‘O Muhammad! You are the Messenger of Allâh(P) and I am Gabriel.’ I looked upwards and saw Gabriel in the form of a man putting his legs on the horizon. He said: ‘O Muhammad You are the Messenger of Allâh(P) and I am Gabriel.’ I stopped and looked at him. His sight distracted my attention from what I had intended to do. I stood in my place transfixed. I tried to shift my eyes away from him. He was in every direction I looked at. I stopped in my place without any movement until Khadijah sent someone to look for me. He went down to Makkah and came back while I was standing in the same place. Gabriel then left, and I went back home. I found Khadijah at home, so I sat very close to her.

She asked: ‘Father of Al-Qasim! Where have you been? I sent someone to look for you. He went to Makkah and returned to me.’ I told her of what I had seen. She replied: ‘It is a propitious sign, O my husband. Pull yourself together, I swear by Allâh that you are a Messenger for this nation.’ Then she stood up and went to Waraqa and informed him. Waraqa said: ‘I swear by Allâh that he has received the same Namus, i.e. angel that was sent to Moses. He is the Prophet of this nation. Tell him to be patient.’ She came back to him and told him of Waraqa’s words. When the Messenger of Allâh(P) finished his solitary stay and went down to Makkah, he went to Waraqa, who told him: ‘You are the Prophet of this nation. I swear by Allâh that you have received the same angel that was sent to Moses.’”