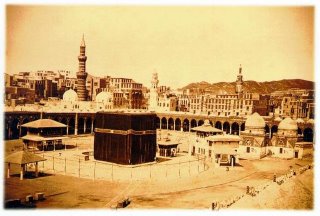 As part of studying the revelation of the Quran, the Muslim scholars have categorised the Soorahs (chapters) of the Quran and their verses according to the time or era of their revelation. This is the subject that came to be known as the Makkan and Madeenan division, or revelation, of the Quran. This division is logical since the Prophet, Muhammad received revelation over twenty-three (23) years: thirteen (13) of them he spent in Makkah and ten (10) in Madeenah.

The correct and well-established definition of Makkan and Madeenan Quran is the one in which the Chapters and verses that were revealed prior to the Hijrah or immigration of Prophet Muhammad from the city of Makkah to the city of Madeenah, are known as ‘Makkan’. All other Chapters and verses that were revealed after this time are termed ‘Madeenan’.

The location of their revelation is not necessarily relevant to this classification, such that there may be certain revelations that were revealed in Makkah, but are classified as Madeenan because of the period of their revelation. A good example of this is the Chapter of An-Nasr (Divine Support), number 110, which was revealed in Minaa (outskirts of Makkah) yet it is classified as a Madeenan Chapter because it was revealed while the Prophet was living in Madeenah  just a few months before he passed away.

The Makkan part of the Noble Quran deals mainly with beliefs like the Creation as in the verse (which means): “And a great number of towns (their population) We destroyed (for their crimes). Our torment came upon them (suddenly) by night or while they were taking their midday nap.” [Quran 7:4], the Oneness and Uniqueness of Allaah, the Most Exalted, as in the verses (which mean): “Say (O Muhammad): ‘He is Allaah, (the) One. Allaah the Self-Sufficient Master, Whom all creatures need. He begets not, nor was He begotten. And there is none co-equal or comparable unto Him.” [Quran 112], prophethood, as in the verse (which means): “It is He (Allaah) who has sent among the unlettered a Messenger (Muhammad) from themselves, reciting to them His verses and purifying them and teaching them the Book [Quran] and wisdom [i.e. the Sunnah or Prophet’s sayings] — although they were before in clear error —.” [Quran 62:2], the revelation, as in the verse (which means): “Verily, We have sent it (this Quran) down in the night of Al-Qadr (Decree).” [Quran 97:1], angels, as stated in the verse (which means): “Whoever is an enemy to Allaah, His Angels, His Messengers, Jibreel (Gabriel) and Meekaa’eel (Michael), then verily, Allaah is an enemy to the disbelievers.” [Quran 2: 98], and The Day of Judgement as in verses (which mean): “Then (on the Day of Judgement) as for him whose balance (of good deeds) will be heavy. He will live a pleasant life (in Paradise). But as for him whose balance (of good deeds) will be light. He will have his home in a pit (Hell). And what will make you know what it is? (It is) a fiercely blazing Fire!” [Quran 101: 6-11]

General disobedience of man, and his punishment and reward are frequent themes in the Makkan verses.

The creation and development of man in the mother’s womb is taken to be a wondrous thing.

Madeenan parts, on the other hand, are filled with laws, both universal as well as worldly (marriage, divorce, heritage, blood-money, other transactions, etc). Special emphasis is laid on justice and fairness. Social interaction and ethical rules have been elaborated time and time again. Politics, worship and prayers are also frequently discussed.

Next, is a list of the Makkan and Madeenan Chapters is provided for easy reference. The list is based on the classification used by the Mus-haf (Quran text book) we read today. For the sake of brevity, only the Chapter numbers are provided:

Accordingly, the Makkan Chapters are 85 in number, and the Madeenan are 28, the total of which is 113, where it should be 114. The reason for missing a Chapter is the fact that we did not include the first Chapter in the Mus-haf, which is Al-Faatihah, or the Opening Chapter. This Chapter has been reported as having been revealed twice, one time in Makkah and another in Madeenah. Therefore, it was not included in either of them.

It should be pointed out that the only way for us to know whether a Chapter is Makkan or Madeenan is through narration, and not by Ijtihaad (the exertion of effort on the part of a qualified Islamic scholar to deduce an Islamic law for an issue about which there is no clear, specific text). Thus, the only way to distinguish them is through authentic narrations from the Companions narrated from the Prophet .