The Quran is the holy book which Muslims recite and turn to for guidance in all aspects of their life.
It is the last testament in a series of divine revelations from God. It comprises the unaltered and direct words of God, revealed through the Angel Gibrael, to the final Prophet, Muhammad (pbuh)1 some 1400 years ago. Islam is a continuation of the teachings of previous Prophets, such as Noah, Abraham, David, Moses and Jesus (peace be upon them all), some of whom were also given divine books. Muslims believe that the key message brought by all Prophets was the same; to believe in One God and not to associate partners with Him, to stay away from sins and to lead a life devoted to earning God’s pleasure. All Prophets taught about life after death and gave glad tidings of paradise for those who obey God, but warned of punishment in hell for those who choose to disobey Him.

The Quran is unique because it is the only revealed book that exists today in the precise form and content in which it was originally revealed. Furthermore, it was actively recorded during the time the religion was being established. The distinctive approach of the Quran is that its spiritual message includes practical injunctions aimed at the general welfare of human beings, society and the environment in which we live. The Quran’s message is eternal and universal, transcending our differences in race, color, ethnicity and nationality. It provides guidance on every aspect of human life – from economics and the ethics of trade to marriage, divorce, gender issues, inheritance and parenting. It neither condemns nor tortures the flesh nor does it neglect the soul. It does not humanize God, nor does it deify man. The Quran describes signs of God’s existence in the universe and how everything is carefully placed in the total scheme of creation.
“Everything made so much sense.This is the beauty of the Quran; it asks you to reflect and reason….When I read the Quran further, it talked about prayer, kindness and charity. I was not a Muslim yet, but I felt the only answer for me was the Qur’an and God had sent it to me.”
Cat Stevens (Yusuf Islam), former British pop star.
This brochure examines two common questions asked by those seeking to understand the origin and authorship of the Quran. 1) What evidence supports the Quran’s claim of authenticity – i.e., that it has not been interfered with? 2) Even if the Quran has been preserved, what evidence supports that it is the Word of God and not simply Muhammad’s (pbuh)own writings?
Preservation of the Quran
The Quran has been preserved for over 1400 years through parallel memorization and writings.
“We have, without doubt, sent down the Message; and We will assuredly Guard it (from corruption).” [Quran 15:9]
The Quran is the only book that has been memorized in its entirety by millions. The process of memorization began during the Prophet’s (pbuh) life and continues to be emphasized by Muslims, even to this day.The use of memorization in oral transmission through the generations “had mitigated somewhat from the beginning the worst perils of relying solely on written records,” related John Burton. [John Burton, An Introduction to the Hadith, Edinburgh University Press; 1994, p27].
Muhammad (pbuh) was very vigilant in preserving the entire Quran in written form as well. The Prophet (pbuh) could not read or write, so as soon as a portion of the Quran was revealed, he called upon his scribes to record the revealed text.The Prophet (pbuh) specified the part of the Quran the revelation belonged to and had the companions read back what was written to ensure that it corresponded exactly with what was revealed.Thus, the complete Quran was not only memorized by the Prophet (pbuh) and many of his companions, but also existed in written form during his lifetime.Within a year after the Prophet’s (pbuh) death, a manuscript of the entire Quran was assembled by a committee led by the chief scribe of the Prophet (pbuh), who followed stringent criteria to safeguard against any errors. The manuscript was unanimously approved by the companions of the Prophet (pbuh), including the hundreds that had memorized the entire Quran. Several replicates of the manuscript were prepared under the leadership of the third caliph and were distributed to the main Muslim centers. One such copy is currently at the museum in Tashkent in erstwhile (Soviet Union) and a facsimile of it, produced in 1905, is available in the Columbia University Library (USA).
Who Wrote the Quran
Muslims believe that the Quran is the Speech of God and not a book written by Muhammad (pbuh) himself. The information above provides evidence for the preservation of the Qur’an, but what suggests that it was actually the word of God?
1) Historical accounts docume 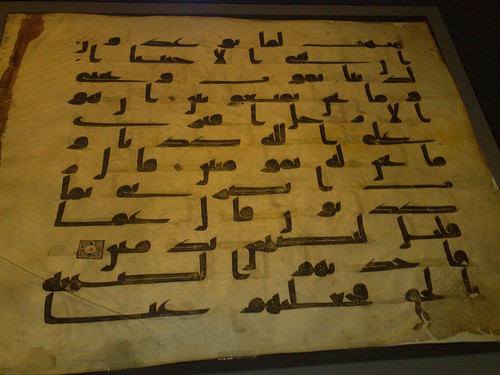 nt, and the Quran openly declares, that Muhammad (pbuh) was unlettered.
“You (O Muhammad) were not a reader of any Scripture before it, nor did you write (such a Scripture) with your right hand, for then those who follow falsehood might (have a right) to doubt it.” [Quran, 29.48]
2) The Quran was revealed at a time when the Arabs excelled in oral poetry. Poetry competitions like today’s rap competitions, were held in the marketplace. Muhammad’s (pbuh) recitation stunned its listeners for its beauty in Arabic. Many converted simply by listening to the deep acoustic rhythms, literary merit and wisdom of the Quranic verses. In contrast, the Arabic of 1400 years ago was restricted to words and expressions relevant to the simple life of desert men and it was impossible to express metaphysical ideas or scientific, religious and philosophical concepts. In fact the science of Arabic grammar was developed after the revelation of the Quran, using the Quran as a basis for devising its rules. It is difficult to find an explanation (other than revelation) that explains how a book existed that superseded, and also differed so greatly from any other Arabic literature. The challenge of the Quran to produce a chapter like its own has not been met to this day:-
“And if you are in doubt concerning that which We reveal unto Our slave (Muhammad) then produce a Surah (chapter) of the like thereof, and call your witnesses besides Allah if you are truthful.” [Quran, 2:23]
3) The Quran is a highly comprehensive book containing Divine truths, metaphysics, religious beliefs and worship, prayer, law and morality. It is a book fully describing the other life, a book of psychology, sociology, epistemology, and history, and a book containing scientific facts and the principles of a utopian life. A testament to the Divine authenticity of the Quran is that such a comprehensive book, one that was revealed over a period of 23 years, does not have any contradictory points.
“Will they not then ponder on the Quran? If it had been from other than God they would have found therein much contradiction and incongruity.” [Quran, 4.82]
4) Could Muhammad (pbuh) have been a liar or had motives for inventing the Quran? The early years of Muhammad’s (pbuh) mission were punctuated by persecutions and sorrow. His followers were brutally tortured, killed and forced to migrate. His clan was boycotted and he was stoned. His enemies even offered him wealth and kingship if he abandoned his call to the belief in One God. Instead, the Prophet (pbuh) lived a very austere life and never pursued any worldly gains like fame, power or wealth. Furthermore, the life of Muhammad (pbuh) was a practical embodiment of the Divine message and a study of his life (through the Hadith2) provides an appreciation of this fact. Even before he received the Prophethood, he was known in his society as Al-Ameen (The Trustworthy) and As-Sadiq (The Truthful). Both Muslim and non-Muslim scholars attest to his honesty and integrity 3 .
5) The Quran mentions things that were not known at the time. How can the existence of these verses be explained? The Quran has scientific descriptions only recently discovered by modern science and that could not have been known 1400 years ago.
“Man We did create from a quintessence (of clay); then we placed him (as a drop of) sperm in a place of rest, firmly fixed; then We made the sperm into a clot of congealed blood; then of than clot We made a (foetus) lump; then We made out of that lump bones and clothed the bones with flesh;then We developed out of it another creature.So blessed be Allah,The Best to Create” [Quran, 23:12-14).
Professor Keith Moore, a prominent scientist of anatomy and embryology (University of Toronto, Canada) commented: “It has been a great pleasure for me to help clarify statements in the Quran about human development. It is clear to me that these statements must have come to Muhammad (pbuh) from God, or ‘Allah’, because almost all of this knowledge was not discovered until many centuries later. This proves to me that Muhammad (pbuh) must have been a Messenger of Allah.”
The Quran describes the expansion of the universe:
“And it is we who have built the univrse with (Our creative) power; and verily, it is We who are steadily expanding it.” [Quran, 51:47].

It was not until 1925, when Edwin Hubble provided evidence of receding galaxies, that the expanding universe came to be accepted as a scientific fact.
Professor Alfred Kroner, a world-famous geologist, explained: “ Thinking about many of these questions and thinking where Muhammad (pbuh) came from, he was after all a bedouin. I think it is almost impossible that he could have known about things like the common origin of the universe, because scientists have only found out within the last few years with very complicated and advanced technological methods that this is the case.”
The Quran describes geographical concepts that were proven after its revelation. For example, it was the common dogma 1400 years ago that the earth was flat, but the Quran described it as a sphere, compressed at each end (like an ostrich egg):
“And the earth moreover, He has made egg shaped4 ” [Quran 79:30].
In 1597, when Sir Francis Drake sailed around the world, the earth became known to be a sphere.
What can explain the origin of the Quran?
The life and character of the Prophet (pbuh) , the depth of the Quranic message, its appeal and relevance to both the spiritual and the mundane, all testify to the Divine origin of the Quran. These points compel us to admit our inability to provide an explanation that relies solely upon material causes. In a world starved of love and compassion, the Quran’s universal message is the perfect antidote to the collective despair of the human condition.
1. pbuh stands for ‘peace be upon him’ an invocation of respect
2. Hadith, the collection of recorded saying and actions of the Prophet Muhammad (pbuh)
3. See 877-Why Islam brochure titled “What they say about Muhammad (pbuh).”
4. The Arabic word for egg here is dahaahaa, meaning ostrich egg.