{We bestow of the Qur’an from on high what serves as a healing and a blessing to true believers, while it only adds to the ruin of the evildoers.

Yet when We bestow Our blessings on man, he turns his back and draws arrogantly aside, and when he is afflicted by evil he gives himself up to despair.

Say, “Everyone acts according to his own disposition. Your Lord is fully aware as to who has chosen the best path”} [Al-Israa’:82-84].

There is certainly a cure and a blessing for those whose hearts are full of faith. Such hearts brighten up and become ready to receive what the Qur’an imparts of grace, reassurance, and security.

There is in the Qur’an a healing power that cures obsession, anxiety, and hesitation. It establishes a bond between believers’ hearts and God. This bond imparts inner peace to believers as they experience a feeling of security in God’s protection. They are happy and satisfied with what they receive from God and contented with their lot in life.

Anxiety, hesitation, and obsession are all terrible to experience. As the Qur’an dispels all these, it is indeed a blessing for true believers.

In the Qur’an we have a cure from greed, envy, and evil thoughts. All these cause sickness of the heart and mind, leading to debility and utter ruin. As the Qur’an cures these, it is a tool of grace bestowed by God on those who truly believe in Him.

The Qur’an also provides a cure from deviant thoughts and feelings. It protects the mind from going far astray, while allowing it complete freedom within its fruitful pursuits. It stops the mind from wasting its energy over what is devoid of use. It lays down for it a sound approach that ensures good and useful results.

The same principle applies to the human body, ensuring that its resources are utilized for what is useful and fruitful, steering human beings away from the suppression of natural desires or indulgence without restraint. Thus it ensures a healthy body. In this again we see that the Qur’an is a means of God’s grace that is bestowed on believers. 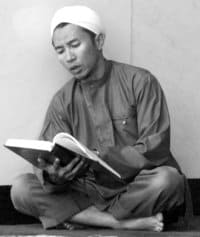 However, the Qur’an {only adds to the ruin of the evildoers} [Al-Israa’:82]. They make no use of the cure it provides or the blessings it brings about. They look with dismay at the believers as they feel proud to be among the followers of the Qur’an.

In their stubborn arrogance, the evildoers persist with their corrupt and unjust methods. Yet in this life, they are defeated by the followers of the Qur’an, which makes them losers. In the life to come, they suffer for their arrogant disbelief and tyranny, and thus they lose again. Hence the Qur’an adds to their ruin.

When man is left to his own devices, without the cure and blessing of the Qur’an, and without consistent restraint of his whims and desires, he moves between two extremes: when he enjoys good fortune, he is arrogant and ungrateful, and when he experiences hardship he is given to despair.

{Yet when We bestow Our blessings on man, he turns his back and draws arrogantly aside, and when he is afflicted by evil he gives himself up to despair} [Al-Israa’:83].

Blessings and good fortune lead to arrogance unless one remembers where they come from and give thanks to God who bestowed them. On the other hand, when people are afflicted by difficulty and hardship, they are easily lost in despair unless they trust in God and hope to receive His grace. It is when one truly relies on God that one feels that hardship will give way to what is better. This makes it clear that faith ensures God’s grace in situations of ease and difficulty alike.

The verses then states that everyone and every camp acts according to the path it follows. The final verdict on methods and actions is left to God alone:

{Say: Everyone acts according to his own disposition. Your Lord is fully aware as to who has chosen the best path} [Al-Israa’: 84].

In this statement we have an implicit warning as to the results of approaches and deeds. Hence, everyone needs to heed the warnings and strive to follow the path of divine guidance which is available to all.

This article is based on the English translation of the author’s work (In the Shade of the Qur’an), Volume XI, Trans. and ed. by Adil Salahi.