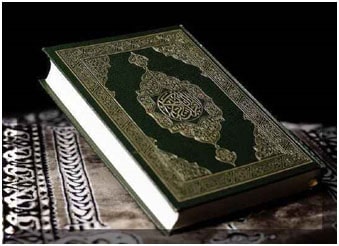 As you come to the Quran, you come to a new world. No other venture in your life can be so momentous and crucial, so blissful and rewarding, as your journey to and through the Quran. It is a journey that will take you through the endless joys and riches of the words that your Creator and Lord has sent to you and all mankind.

Here you will find a world of untold treasures of knowledge and wisdom to guide you on the pathways of life, to mould your thoughts and actions. In it you will find deep insights to enrich you and steer you along the right course. From it you will receive a radiant light to illumine the deeper reaches of your soul. Here you will encounter profound emotions, a warmth to melt your heart and bring tears running down your cheeks. It is crucial for you because, as you travel through the Quran, at every step you will summoned to choose, and to commit to Allah. To read the Quran is nothing less than to live the Quran willingly, sincerely, devotedly, and totally.

The outcome of your entire life depends on how you heed the call given by Allah. The journey is therefore decisive for your existence, for mankind, for the future of human civilization. A hundred new worlds lie in its verses. Whole centuries are involved in its moments. Know, then, that it is the Quran, and only the Quran, which can lead you on and on to success and glory in this world and in the world to come.

What is the Quran?

It is beyond man’s power to comprehend, or to describe, the greatness and importance of what the Quran holds for him. Yet, to begin with, you must have some idea of what it is and what it means to you , and such that you are inspired to immerse the whole of yourself in the Quran, in total commitment, complete dedication and ceaseless pursuit, as it demands. The Quran is Allah’s greatest blessing or you . It is the fulfillment of His promise to Adam and his descendants: ‘there shall come to you guidance from Me, and whatsoever follows My Guidance no fear shall e on them, neither shall they sorrow’ (al Baqarah 2:38).

It is the only weapon your frail existence as you struggle against the forces of evil and temptation in this world. It is the only means to overpower your fear and anxiety. It is the only ‘light’ (nur) , as you grope in the darkness, with which to find your way to success and salvation. It is the only healing (shifa) for your inner sickness, as well as the social ills that may surround you. It is the constant reminder (dhikr) of your true nature and destiny, of your station, your duties, your rew. It was brought down by one who is powerful and trustworthy in the heavens the heart of the Prophet Muhammad, blessings and peace be on him. to your Creator. It tells you of Him, of His attributes, of how He rules o to you, and how you should relate to Him, to yourself, to your fellow men other existence. The rewards that await you here are surely many, increasing manifold and the hereafter, but what awaits you at the end of the road promises Allah in the Hadith qudsi, the eye has seen not, nor the ear heard, nor the heart of man ever conceived and, adds Abu Hurayra ‘no human being can imagine what joys are being kept hidden for them in d or all that they did'(Bukhari, Muslim)

Can the Quran again, be living, relevant force, as powerful for us now 1400 years away, as it was then? This is the most crucial question that we must answer if we wish to shape our destiny afresh under the guidance of the Quran.
There appear, however, to be some difficulties. Not least of which has to do with the fact that Quran was revealed at a certain point in time. Since then we have traveled a long way, made gigantic leaps in technological know-how, and seen considerable social changes take place in human society. Moreover, most of the followers of the Quran today do not know Arabic, and many who do have little idea of the ‘living’ language of the Quran.

They cannot be expected to absorbs its idioms and metaphor, so essential to exploring and absorbing the depths of the Quranic meaning. Yet its guidance, by its own claim, has an eternal relevance for all people, being the word of the Eternal God. For the truth of its claim, it seems to me, it must be possible for us to receive, experience, and understand the Quran as it’s first recipients did, at least in some measure and to some degree. We seem to almost have a right to this possibility of receiving God’s guidance in its fullness and with all its riches and joys. In other words despite historical incidence of the revelation in a particular language at that particular time and place, we should be capable of receiving the Quran now (because its message is eternal), capable of making its message as much a real part of our lives as it was for the first believers and with the same urgent and profound relevance for all our present concerns and experiences.

But how do we do this? To put it very forthrightly, only by entering the world of the Quran as if Allah were speaking to us through it now and today, and by fulfilling the necessary conditions for such an encounter. Firstly, then, we must realize what Quran as the word of God is and means to us, and bring all the reverence, love, longing and will to act that this realization demands. Secondly, we must read it as it asks to be read, as Allah’s Messenger instructed us, as his Companions read it. Thirdly, we must bring each word of the Quran to bear upon our own realities and concerns by transcending the barriers of time, culture and change.

For the first addressees, the Quran was a contemporary event. Its language and style, its eloquence and a rationale, its idiom and metaphor, its symbols and parables, its moments and events were all rooted in their own setting. These people were both witnesses to and in a sense, participants in the whole act of revelation as it unfolded over a period of their own time. We do not have the same privilege; yet, in some measures, the same ought to be true for us. By understanding and obeying the Quran in our own setting, we will find it, as far as possible, as much a contemporary event for ourselves as it was then. For the essence of man has not changed; it is immutable.

Only man’s externalities- the forms, the modes, the technologies – have changed. The pagans of Makka may be no more, nor the Jews of Yathrib, nor the Christians of Najran, nor even the ‘faithful’ and the ‘unfaithful’ of the community of Madina; but the same characters exist all around us. We are humans being exactly as the first recipients were, even though may find it extremely difficult to grapple with the deep implications of this very simple truth. Once you realize the truths and follow them, once you come to the Quran as first believers did, it may reveal to you as it did to them, make partners of you as it did of them. And only then, instead of being a mere revered book, a sacred fossil, or a source of magic-like blessing, it will change into a mighty force, impinging, stirring, moving and guiding us deeper and higher achievements, just as it did before.