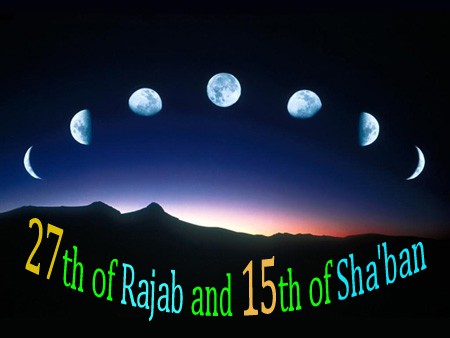 I have to question concerning the month of Rajab and Sha’ban. Some people say that the 27th Rajab and 14th of Sha’ban nights of worship. Please explain in detail, so I can help my Pakistani community to understand this, because in our country they said that it is a special night and I don’t see any evidence in the Hadeeth why they said that also. Is there is a difference in belief?

All perfect praise be to Allah, The Lord of the Worlds. I testify that there is none worthy of worship except Allah, and that Muhammad  is His slave and Messenger.

There are two types of fasting in Islam. The first one is obligatory fasting and the second one is supererogatory fasting.

1) Obligatory fasting: The Ramadhan fasting is the only fasting coming under the category of obligatory fasting in Islam. Observing fasting during the whole month of Ramadan (9th month of Islamic calendar) is an obligation for all Muslims.

2) Supererogatory fasting: In this category embraces fasting different occasions and particular dates such as the 9th and 10th of Muharram (the first month of Islamic calendar), on the day of ‘Arafa in the Hajj, the three consecutive days of 13th, 14th and 15th of every moth of Islamic calendar (Ayyam Al-Beedh) and every Mondays and Thursdays. Observing fasting on these days is the Sunnah of the Prophet .

Thus, it is not correct to observe fasting on this specific day. Then, there is difference among scholars concerning specifying the day of al-Isra. Ibn Hajar  in al-Fat’h mentioned that there are more than ten opinions in this concern. This disagreement indicates that this day has no special significance for fasting or spending its night in performing prayers. If so, the Prophet  and his companions would not have missed it.

Basing on the above-mentioned, we state that it is Bid’ah (innovation) to fast this day as an observance since there is no correct Prophetic narration in this concern. But, if fasting on this day coincides with any supererogatory fasting or one’s regular fasts (Monday or day after day) then it is legal to fast this day (the 27th Rajab).

Fasting of 15th Sha’ban (the 8th month of Islamic calendar): As for spending the night of 15th of Sha’ban in prayers and other forms of worship, there are several Ahadeeth (Prophetic narrations) in this concern, but there is disagreement among scholars concerning the authenticity of these Ahadeeth. Some scholars consider those Ahadeeth weak; other scholars consider them sound. Thus, according to some Fuqaha (jurists), it is desirable to spend this night in optional forms of worship such as prayer.

According to Ibn Taymiyyah  some of the Salaf (righteous predecessors) were used to spending this night (15th of Sha’ban) in prayers and other forms of worship. But, some of the Salaf disliked gathering people at Mosque for this night and considered that as Bid’ah (innovation). Nowadays, many Muslims perform a special prayer with special recital on this night. This form certainly is Bid’ah.

Imam al-Nawawi  said: ‘A prayer that is known as Salat Ar-Ragha’ib, which is of 12 Raka’hs, performed between Salat Al-Maghrib and Salat Al-Ishaa’ (evening and night prayer) at the 1st Friday night of Rajab and a prayer of the 15th of Sha’ban (100 Raka’hs) are two forms of Bid’ah and are abominable actions. We should not observe them… Then, their Hadeeth is false.’

The Hadeeth that indicated to by al-Nawawi  in the above paragraph is as follows: ‘Whoever prays a 100 Raka’hs at the night of 15th of Sha’ban, Allah will send a hundred angels for him. Thirty ones give him glad tidings concerning Paradise; thirty others give him more confidence that he will be safe from entering the Hell; thirty keep him safe from the evils of this present life; the last ten ward the wiles of the devil off.’ This Hadeeth is invalid, al-Nawawi  said.