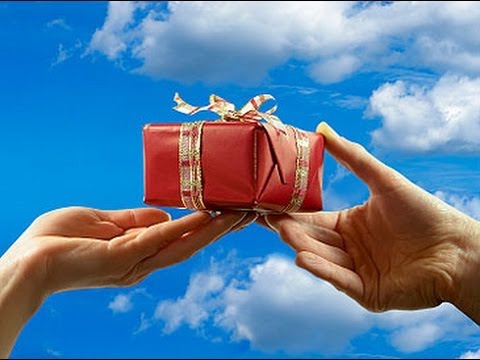 Question:
My neighbour is an American Christian, and she and her family brought me a gift when it was Christmas. I could not refuse the gift, lest she be offended.
Can I accept this gift, as the Messenger (peace and blessings of Allaah be upon him) accepted gifts from kaafirs?.

Answer:
Praise be to Allaah.

Firstly:
The basic principle is that it is permissible to accept gifts from kaafirs, so as to soften their hearts and make Islam attractive to them, as the Prophet (peace and blessings of Allaah be upon him) accepted gifts from some of the kaafirs, such as the gift of al-Muqawqis etc.

Secondly:
It is permissible for a Muslim to give gifts to kaafirs and mushriks, with the aim of softening their hearts towards Islam, especially if they are relatives or neighbours.

‘Umar (may Allaah be pleased with him) gave a hullah (suit) to his mushrik brother in Makkah, as was narrated by al-Bukhaari (2619).

But it is not permissible to give a kaafir a gift on the day of one of his festivals, because that is regarded as approving of or participating in celebration of the false festival.

If the gift is something that will help in celebrating the festival, such as food, candles and the like, then it is even more haraam, and some of the scholars are of the view that this is kufr. 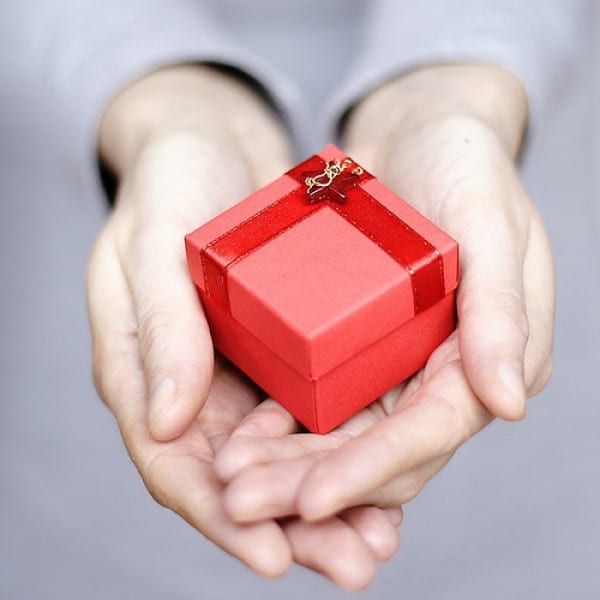 aa’iq (6/228): Giving gifts on the occasion of Nayrooz and Mahrjaan [two non-Islamic Persian festivals] is not permissible, i.e., giving gifts on these two days is haraam, and is in fact kufr. Abu Hafs and Kabeer (may Allaah have mercy on him) said: If a man were to worship Allaah for fifty years, then on the day of Nayrooz he were to give an egg as a gift to one of the mushrikeen, intending thereby to venerate that day, he would have committed kufr and his good deeds would be cancelled out. The author of al-Jaami’ al-Asghar said: If he gives a gift to another Muslim on the day of Nayrooz, not intending thereby to venerate that day, but it is the habit of some people to give gifts on that day, then this is not regarded as kufr. But he should not do it on that particular day; he should do it before or after, so that he will not be imitating those people. The Messenger of Allaah (peace and blessings of Allaah be upon him) said: “Whoever imitates a people is one of them.” It says in al-Jaami’ al-Asghar: A man bought something on the day of Nayrooz which he did not buy before that. If he intended thereby to venerate that day as the mushrikoon venerate it, then he has committed kufr, but if he wanted to eat or drink or enjoy himself, then he has not committed kufr. End quote.

It says in al-Taaj wa’l-Ikleel (a Maaliki book – 4/319): Ibn al-Qaasim regarded it as makrooh to give a gift to a Christian on the occasion of his festival, or to give palm leaves to a Jew on his festivals. End quote.

It says in al-Iqnaa’, which is a Hanbali book: It is haraam to attend the festivals of the Jews and Christians and to sell them things or give them gifts on the occasion of their festivals.

Moreover it is not permissible for a Muslim to give a gift to another Muslim because of this festival, as stated above when quoting the Hanafi view. Shaykh al-Islam Ibn Taymiyah (may Allaah have mercy on him) said: Whoever gives a gift to the Muslims during these festivals unlike what he usually usually at other times, his gift should not be accepted, especially if the gift is something that helps in imitating them, such as giving candles etc at Christmas, or giving eggs, milk and lambs on Maundy Thursday which comes at the end of their fast (i.e., the end of Lent). Similarly, no gift should be given to a Muslim at the time of these festivals because of the festival, especially if it is something that helps in imitating them, as we have mentioned. End quote from Iqtida’ al-Siraat al-Mustaqeem (1/227).

Thirdly:
With regard to accepting a gift from a kaafir on the day of his festival, there is nothing wrong with that, and that is not regarded as participating in it or approving of it, rather it should be accepted as an act of kindness, with the aim of softening his heart and calling him to Islam. Allaah has permitted kindness and fair treatment towards the kaafir who is not fighting the Muslims, as He says (interpretation of the meaning):
“Allaah does not forbid you to deal justly and kindly with those who fought not against you on account of religion nor drove you out of your homes. Verily, Allaah loves those who deal with equity”[al-Mumtahanah 60:8]

But kindness and fair treatment does not mean friendship and love, because it is not permitted to take a kaafir as a friend or love him. Allaah says (interpretation of the meaning):
“You (O Muhammad) will not find any people who believe in Allaah and the Last Day, making friendship with those who oppose Allaah and His Messenger (Muhammad), even though they were their fathers or their sons or their brothers or their kindred (people). For such He has written Faith in their hearts, and strengthened them with Rooh (proofs, light and true guidance) from Himself. And He will admit them to Gardens (Paradise) under which rivers flow, to dwell therein (forever). Allaah is pleased with them, and they with Him. They are the party of Allaah. Verily, it is the party of Allaah that will be the successful”[al-Mujaadilah 58:22]

“O you who believe! Take not My enemies and your enemies (i.e. disbelievers and polytheists) as friends, showing affection towards them, while they have disbelieved in what has come to you of the truth” [al-Mumtahanah 60:1]

“O you who believe! Take not as (your) Bitaanah (advisors, consultants, protectors, helpers, friends) those outside your religion (pagans, Jews, Christians, and hypocrites) since they will not fail to do their best to corrupt you. They desire to harm you severely. Hatred has already appeared from their mouths, but what their breasts conceal is far worse. Indeed We have made plain to you the Ayaat (proofs, evidences, verses) if you understand”[Aal ‘Imraan 3:118]

“And incline not toward those who do wrong, lest the Fire should touch you, and you have no protectors other than Allaah, nor you would then be helped”[Hood 12:113]

“O you who believe! Take not the Jews and the Christians as Awliyaa’ (friends, protectors, helpers), they are but Awliyaa’ of each other. And if any amongst you takes them (as Awliyaa’), then surely, he is one of them. Verily, Allaah guides not those people who are the Zaalimoon (polytheists and wrongdoers and unjust)”[al-Maa’idah 5:51]

and there is other evidence which indicates that it is haraam to take a kaafir as a friend or love him.

Shaykh al-Islam Ibn Taymiyah (may Allaah have mercy on him) said: As for accepting a gift from them on the day of their festival, we have quoted above that ‘Ali ibn Abi Taalib was brought a gift on the occasion of Nayrooz and he accepted it.

Ibn Abi Shaybah narrated that a woman asked ‘Aa’ishah: We have some wet nurses from among the Magians, and they have a festival on which they bring us gifts. She said: As for what is slaughtered for that day, do not eat it, but eat from their vegetables.

It was narrated from Abu Barzah that he had some Magian neighbours who used to bring him gifts on the occasion of Nayrooz and Mahrjaan, and he used to say to his family: Whatever is of fruits, eat it, and whatever is otherwise, reject it. 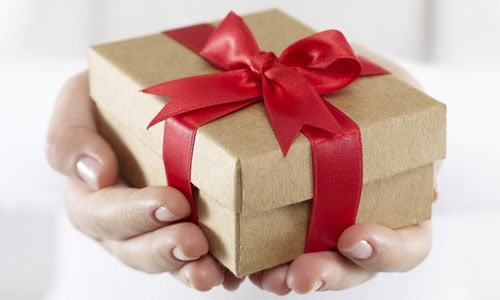 All of this indicates that the festival does not make it forbidden to accept their gifts, rather the ruling is the same whether it is their festival or not, because that does not involve helping them with the symbols of their kufr.

Then he pointed out that meat slaughtered by a kitaabi (Jew or Christian) is halaal except that which is slaughtered for their festivals, which it is not permissible to eat. He said (may Allaah have mercy on him): It is only permissible to eat of the food of the people of the Book, during their festivals that which has not been slaughtered for the festival, whether it is bought or received as a gift. As for meat slaughtered by the Magians, the ruling on that is well known, and it is haraam according to all. As for that which is slaughtered by the people of the Book for their festivals and that which they slaughter as an act of worship to draw close to anything other than Allaah, as the Muslims offer sacrifices as an act of worship to draw closer to Allaah, namely as that which they sacrifice to the Messiah, two views have been narrated from Ahmad concerning that, the most well known of which in his texts is that it is not permissible to eat it even if the name of something other than Allaah has not been mentioned over it. The prohibition on that was narrated from ‘Aa’ishah and ‘Abd-Allaah ibn ‘Umar . End quote from Iqtida’ al-Siraat al-Mustaqeem (1/251).

Conclusion: It is permissible for you to accept the gift from your Christian neighbour on the day of their festival, subject to the following conditions:

1 – This gift should not be meat that has been slaughtered for the festival.

2 – It should not be something that may be used to help in imitating them on the day of their festival, such as candles, eggs, palm leaves etc.

3 – You should explain to your children the belief in al-wala’ wa’l-bara’ (loyalty and friendship vs. disavowal and enmity), lest a love of this festival or a fondness for the giver be instilled in their hearts.

4 – The gift should be accepted with the aim of softening her heart and calling her to Islam, not with friendship and love.

If the gift is something that it is not permissible to accept, then the refusal to accept it should be accompanied by an explanation of why it is being refused, such as saying, “We only refused your gift because it is meat that was slaughtered for the festival, and it is not permissible for us to eat it, or these things are only accepted by those who are taking part in the celebrations, and we do not celebrate this festival, because it is not part of our religion, and it involves beliefs that we do not believe in” and so on, which is a starting point for calling them to Islam and explaining the danger of the kufr that they follow.

The Muslim should be proud of his religion and apply its rulings, and he should not give them up out of shyness or to impress anyone, for Allaah is more deserving of us feeling shy before Him.