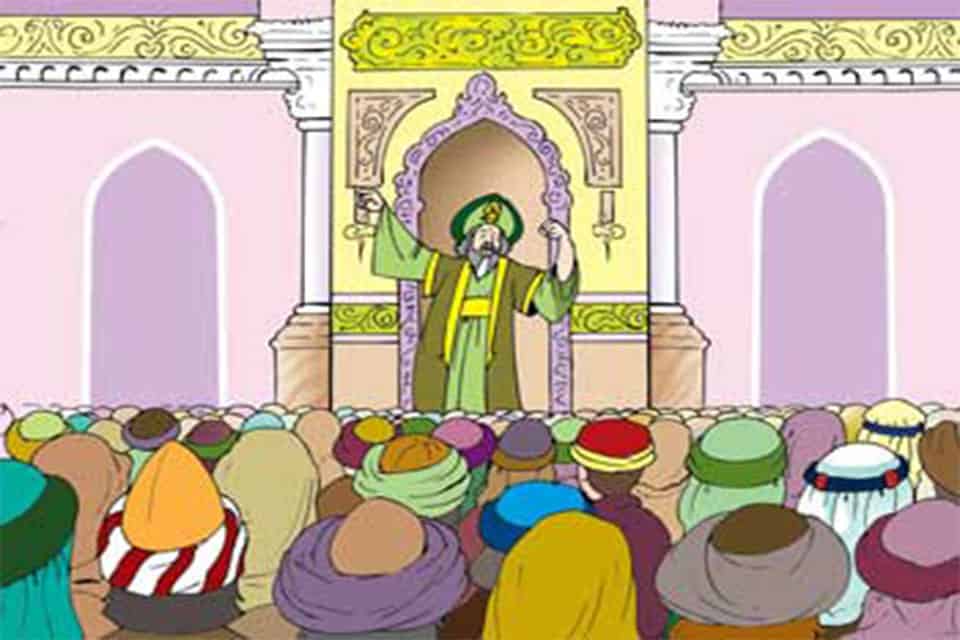 Al-`Izz Ibn `Abdus-Salaam was one of the most famous characters of the seventh Hijri century (13th century. AD). He was a learned scholar with deep knowledge of Islamic sciences such as Jurisprudence and Prophetic narrations. He was also a great writer who authored valuable books. These were not the only reasons which caused people to love him and respect him. People loved him because he lived for them, teaching them their religious affairs, eradicating innovations in religion and superstitions, advising the rulers, performing Jihaad in the battlefields in the cause of Allah and confronting injustice and tyranny.

A Genius in His Childhood
`Abdul-‘Azeez Ibn `Abdus-Salaam known as Al-`Izz, was born in Damascus in 577 A.H., 1181 A.C. He spent his early years in Damascus where he acquired knowledge. At that time there were classes of knowledge everywhere in Damascus whether in mosques or schools. Al-`Izz was a little bit behind his colleagues in acquiring knowledge but he succeeded in compensating for the knowledge he missed through being studious in class and studying his lessons with a strong will and ardent desire. His intelligence and deep understanding helped him master jurisprudence, interpretation of the Quran, Quran sciences, Prophetic narrations, Arabic language, literature, grammar, and rhetoric.
After finishing his study, he started to teach in his house, Damascus mosques, and state-funded schools. The young teacher managed to have a large number of students who liked him because of his deep knowledge, mastery of his subjects, excellence in explaining the lessons, and his sense of humour as he used to mention some anecdotes that alleviated the toughness of the lessons and eliminated boredom. Following this methodology, many students joined his classes and liked him.
The Preacher of the Umayyad Mosque in Damascus
Al-`Izz Ibn `Abdus-Salaam was an excellent preacher who influenced his listeners through his sincere emotion, deep knowledge, smooth style, and clear ideas.
These qualifications made him the preacher of the Umayyad Mosque in Damascus. His Friday speeches were excellent lectures in which people learnt about the teachings of their religion, the issues that may be of concern to them and how to tackle the problems they faced in their daily lives which he (i.e. Al-‘Izz) solved. Al-`Izz Ibn `Abdus-Salaam was famous for his steadfastness and he never remained silent when he saw falsehood or injustice especially on issues that may affect the Islamic community or the territory in which he lived. If he knew about certain encroachments or violations, he would immediately pinpoint them out and display the Islamic perspective towards them. This attitude caused some problems for him, but he did not care as long as he fulfilled his Islamic duty.
In one of his Friday speeches, he stated a legal opinion [Fatwa] that prohibited selling weapons to the Crusaders who were still occupying some territories in Levant. He adopted this opinion especially after he came to know that the Crusaders used these weapons in fighting the Muslims.
He also came to know that the Sultan of Damascus, As-Saalih Ismaa`eel, allowed some Crusaders to enter Damascus in order to buy weapons from the Muslim merchants.
That Friday speech had a great effect on the people who talked about it and admired it, except for the Sultan and his retinues. The Sultan deposed him from the job of delivering Friday speeches or issuing Fatwa (legal Islamic opinions) and even imprisoned him. However, he released him shortly afterwards because he was afraid of the people’s anger and revolution. However, the Sultan issued a mandatory decree that Al-`Izz should not leave his house.
His Departure to Cairo
Al-`Izz Ibn `Abdus-Salaam  was fed up because of the isolation imposed on him and because he was prohibited from giving religious speeches and delivering Fatwa. He felt that the value of a man is based on his ability to benefit others, and that his own value was to mix with people, teach them, deliver Fatwa and Friday speeches. Therefore, he decided to leave for Cairo. He refused to ask for the Sultan’s forgiveness so that the latter would be pleased with him.
The Shaykh arrived in Cairo in 639 A.H., 1241 A.C. The Sultan of Egypt, As-Saalih Ayyoob, received him whole-heartedly. The Sultan immediately asked him to give Friday speeches in `Amr Ibn Al-`Aas Mosque. He also appointed him as the Chief Judge and supervisor on re-populating desolate mosques in Egypt. His job is close to what is known nowadays as Minister of Awqaf (Endowments) and Islamic affairs.m) Sells the Princes:
The revered Shaykh agreed to be the Chief Judge so as to defend the people’s rights and protect them from oppressors and people in power. The Shaykh discovered that most of the princes, upon whom As-Saalih Ayyoob relied, were still slaves. He saw that as long as these princes were not free, it was not valid to designate them to take care of administering the country’s affairs. The courageous Shaykh immediately told them his opinion. He invalidated their business transactions such as buying, selling and other actions that only free people did. The princes’ interests were paralyzed and among these princes was the deputy of the Sultan.
The princes tried to negotiate with Al-`Izz Ibn `Abdus-Salaam  so that he would abrogate Fatwa [his Islamic legal opinion] that they should be sold and their prices would be deposited in the Muslims’ Treasury House. The Shaykh refused their negotiations and exhortation. As it was a difficult situation for the slave princes, they refused to adhere to the legal opinion of the Shaykh and they referred the whole affair to the Sultan, As-Saalih Ayyoob. The Sultan asked the Shaykh to abandon his opinion, but the Shaykh refused. The Sultan spoke in a tough way to the Shaykh who left the meeting with the intention of resigning from his position.
The Auction of Selling the Princes: 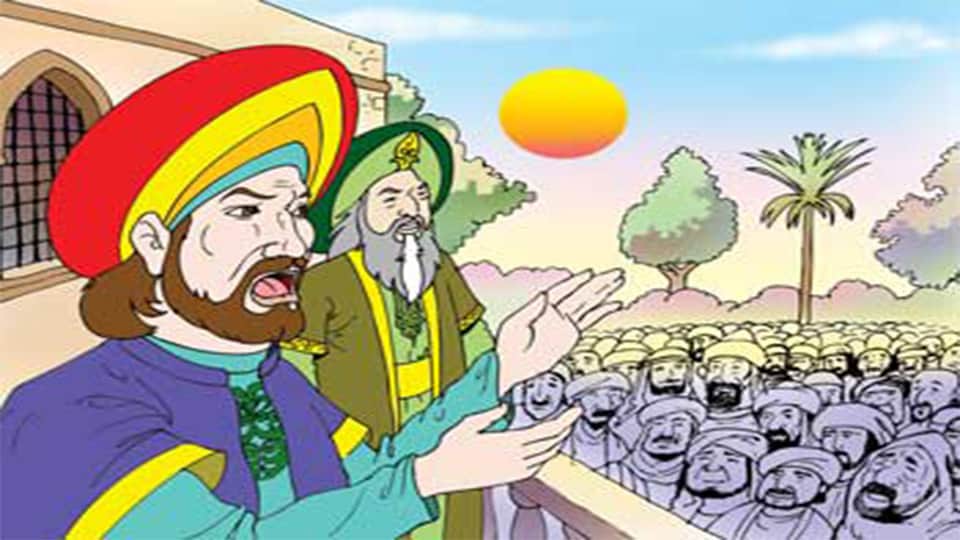 When the news of the Shaykh’s resignation spread and that he had decided to leave Cairo, people followed him and appealed to his return. At the same time, the Sultan realized that he had made a mistake and he also followed the Shaykh in order to grant him whatever he wished. The Sultan convinced him to return, and the Shaykh agreed but he stipulated that the princes must be sold.
It was an extremely impressive scene when Al-`Izz Ibn `Abdus-Salaam  started to sell the princes one after another and ask for more money in return for them. The Sultan paid their prices out of his own money to the courageous Shaykh who deposited their price in the Muslims’ Treasury House. This rare incident was the reason for calling Al-`Izz Ibn `Abdus-Salaam  “the Seller of Kings”.
Princes First in Paying Taxes
The Shaykh stayed in Cairo until the Sultan Sayfud-Deen Qutuz assumed power in 657 A.H., 1258 A.C.
During his reign, the Tartars sent some messengers to Cairo asking for an unconditional surrender. The Tartars were at the entrances of Egypt after they had controlled the whole eastern Muslim world. The Sultan of Egypt refused and insisted on defense and resistance. Al-`Izz Ibn `Abdus-Salaam  was the one behind the Sultan having such an opinion and he mobilized the people to go out for Jihaad.
The Sultan needed money to spend on the preparations for the battle. He tried to impose new taxes on the people but Al-`Izz Ibn `Abdus-Salaam  opposed this move, and said to him: “Before you impose more taxes on the people, you and the princes must first return all your money to the Muslims’ Treasury House. If this money is not sufficient to prepare for the battle, then you could impose more taxes on the people.”
The Sultan accepted the opinion of Al-`Izz Ibn `Abdus-Salaam  and acted accordingly. The Muslims marched out to encounter the Tartars and they defeated them in the battle of `Ayn Jaaloot.
Books by the Shaykh and his Scientific Achievements:
Al-`Izz Ibn `Abdus-Salaam  was a multi-talented scholar in the fields of giving Fatwa, delivering Friday speeches, acting as a judge, and teaching. He wrote many books on the interpretation of the Quran, Prophetic narrations, jurisprudence, principles of jurisprudence and the Prophet’s Biography. Among his most famous books are Principles of Rulings and “The Utmost Goal in Abridging the End”. Both books cover the As-Shaafi’ee Juristic School. He also wrote “An Abridged Version of Saheeh Muslim”, “The Beginning in Giving Preference to the Prophet” and “The Interpretation of the Quran”.
The Character of Al-`Izz Ibn `Abdus-Salaam
Al-`Izz Ibn `Abdus-Salaam  was a true scholar who knew that the role of a scholar is not restricted to giving classes, delivering Friday speeches, and teaching students. He was a reformer who used to guide people to what is right and would correct their mistakes even if they were committed by a prince or the Sultan himself. As he had a strong will and his soul was filled with love for Allah, there was no room in his soul to fear the Sultan or those in authority. He never feared anyone, except Allah. When a person fears Allah, people respect him and hold him in high esteem.
The Shaykh lived to reform the lives of people. He occupied a dear place in their hearts and he loved the people who, in turn, loved him.
His Death
The revered Shaykh lived for eighty three years full of serving Islam, correcting mistakes with his tongue and pen and fighting the Crusaders until he died on the 10th of Jumaadaa Al-Awwal 660 A.H., the 2nd of March 1261 A.C.