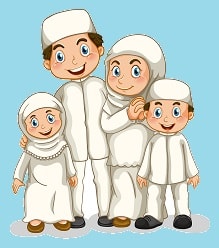 What is the ruling of deserting one’s family for the pretext of performing Da‘wah (Islamic propagation)?

All perfect praise be to Allah, The Lord of the Worlds. I testify that there is none worthy of worship except Allah, and that Muhammad

is His slave and Messenger.

The wife and children have specific rights that should be fulfilled as much as possible. The Prophet

told us that every one is responsible for the people who are under his guardianship. [Al-Bukhari and Muslim]

said that it is indeed a great sin for a person not to shoulder the responsibility of those who are under his guardianship. [Ahmad, An-Nawawi : Authentic]

If a person takes care of his family’s expenses, he can then dedicate himself to calling to Allah The Almighty and working for the sake of his religion. In fact, if the person has good insight, he would be able to strike a balance between people’s rights and his religious duties and not do one thing to the detriment of another. This is proved by the Hadeeth that was narrated on the authority of Salman

who said that he visited Abu Ad-Dardaa’

and found Um Ad-Dardaa’, may Allah be pleased with her, wearing shabby clothes, so he asked her about that. She told him that her husband Abu Ad-Dardaa’

was an ascetic who did not care for the joys of this worldly life.

and offered him food, but he did not eat with him as he was fasting. Salman

said that he would only eat if Ad-Dardaa’

wanted to get up to pray, but Salman

told him to sleep. Before dawn, Salman

told him to get up and pray, and they both went out to pray the Dawn prayer. At that time, Salman

told him that there are certain rights for Allah The Almighty, some for himself, and others for his family and that he should fulfill all these rights.

When they went to the Prophet

agreed with what Salman

had said and done. [Al-Bukhari]

said that this Hadeeth proves that it is permissible to quit something that is preferable for fear that it might lead to apathy or might waste other ordained or more preferable rights.