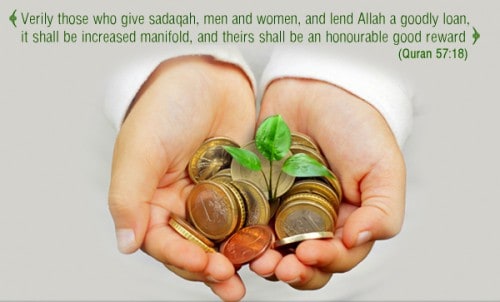 She said, “Az-Zubayr married me when he had nothing but a horse that I used to groom and provide with fodder. I used to grind date stones for his camel (which was used for carrying water), bring water and knead the dough. I used to carry the date stones on my head from the plot of Az-Zubayr which the Prophet  had allocated to him. It was as far as about two-thirds of a Farsakh (from the house). I remained in that state until Abu Bakr sent me a maid to groom the horse. It was as if he had freed me.” [Al-Bukhari and Muslim]

Dear Muslim sister, do you know who the speaker is?

She is Asmaa’ bint Abu Bakr  describing her living conditions and giving without limits, without asking for a return.
When she married Az-Zubayr ibn Al-‘Awwaam  he had no property or servant. She led a tough life at the beginning of their life together. She used to feed the horse, grind its food, knead the dough, and so on. She had no servant to relieve her of taking care of the horse until Abu Bakr  sent her a servant and it was as if he had freed her.

Years later, Allah The Almighty provided her husband with abundant provisions. After having no servant, he had one thousand servants. He had so much money that it was calculated as forty million.

Before the bestowal of this abundant provision, Asmaa’  earnestly supported him. She was patient and satisfied with the decree of Allah The Almighty and certain of His reward.

There is no doubt that the giving of a woman needs patience. The Prophet  said to Ibn ‘Abbaas : “And know that victory comes with patience, relief with affliction and ease with hardship.” [At-Tirmithi]

Asmaa’ of the two waistbands

Here is another situation of the giving of Asmaa’  in Hijrah. She used to carry food and water and news from Makkah to the Cave of Thawr. The Messenger of Allah  called her Asmaa’ of the two waistbands because when she prepared food and water for the Prophet  and her father on the day of the Hijrah (emigration) from Makkah to Al-Madeenah, she did not find anything to tie them with. Consequently, she tore her waistband into two pieces: one for the container of food and the other for water. As a result, she won the supplication of the Messenger of Allah  for her to be compensated with two waistbands in Paradise instead of them.

She set the best and most vivid example to be emulated by women until our time. She remained patient with her husband during the time of poverty and was keen on pleasing and obeying him by serving him without any complaint.
She did not leave her home complaining to her family about her poor husband who had no luxuries. In fact, this is the effect of faith when it sincerely enters the heart.

Today, there are many women who are repelled by leading a modest life with their husbands and do not rest until they pursue the way of the devil to achieve their worldly desires. Thus, they abandon their husbands and children and their families are destroyed — newspapers and magazines tell us about this bitter reality every day.

Contentment results in happiness and tranquility of the soul. It makes the person honored and protects them safe from disgrace or committing unlawful acts for gaining material benefits.

‘Abdullaah ibn Az-Zubayr  the son of Asmaa’ bint Abu Bakr and nephew of ‘Aa’ishah  said about both women, “I have never seen women more generous than my aunt ‘Aa’ishah and my mother Asmaa’. However, they were different in their generosity. My aunt used to accumulate one thing after another until she would gather what she felt was sufficient and then she would distribute it in its proper channels. My mother, on the other hand, would not keep anything even for the next day.” Asmaa’  was very generous and a giving woman.

Which way do you choose?

One of the ways of giving and goodness is mentioned in the Hadeeth (narration) by Abu Hurayrah  that the Messenger of Allah  said: “Every day the sun rises, charity is due on every joint of a person: when you judge fairly between two men, this is charity; when you assist a man to mount his riding animal or help him load his luggage onto it, this is charity; and a good word is charity; and every step that you take (towards the mosque) for prayer is charity and removing harmful things from the way is charity.” [Al-Bukhari and Muslim]

It is well-known that the nature of woman to give and this is the nature that Allah The Almighty created her with. We find this spontaneous quality of giving when she spends the night awake beside her sick child, bears the hardships of life with her husband and bears the hardship of upbringing and its difficulties.

When Faatimah  asked the Prophet  to bring her a servant because her hands had become rough due to kneading dough, he told her and her husband:

This is the prescription of ‘Ali ibn Abi Taalib  to face the burdens of home for every man and woman. You can try this prescription and see the result for yourself.