Honey can be the new antibiotic for the 21st century! Thousands of studies and experiments proved this. The Holy Qur’an, however, proved it 14 centuries back.
Dear ones! We all heard and read about the benefits of honey and the healing properties Allah the Almighty has given this wonderful substance.  However, very few of us think of using honey to treat diseases.  The reason may be that many of us are not aware of the wonderful healing energy of honey – discovered by western science today- which is superior to any other substance in the world.

I will present to you the latest news that scientists have about the use of honey in healing.  My simple advice: you should always have honey at home even for small quantities, because the benefits we will see are so great and amazing.  Thousands of years back (approximately 5,000 years back), the old Egyptians used honey to heal injuries and realized some of its medical properties.

Islam emphasized on the importance of honey, the word (healing) appeared 4 times in Qur’an, 3 times linked to Qur’an and one time linked to honey.  Allah the Almighty says “Then, eat of all fruits, and follow the says of your Lord made easy (for you). There comes forth from their bellies, a drink of varying colour wherein is healing for men. Verily, in this is indeed a sign for a people who think.” (An-Nahl:69).

Some people may ask: How can we see the miracle of the Qur’an in honey if the old Egyptians realized its importance even before the Qur’an appeared? I say that the Qur’an confirmed the right and discarded and corrected the wrong, and this itself is a miracle!
To prove this, there is no single verse (Ayah) in the Qur’an that is proved incorrect by the science.  There were so many myths known to the descending time of the Qur’an, so if the Qur’an was written by a man as claimed, it would have been mixed with the myths of that time, but we find that the Qur’an comes with the ultimate truth from Allah the Almighty. 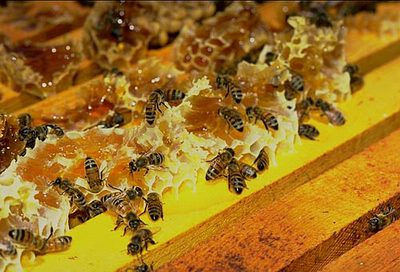 Now Let us carefully study some of the new discoveries about this substance that Allah created for us:
Dr. Molan found that all kinds of honey have strong antibiotics; he said that there is no single substance in the world that has antiseptic properties like honey, because the bees produce a stuff called Hydrogen Peroxide through special enzymes that is known for its antiseptic properties.

After 20 years of experiments, this researcher proved that honey has high healing power that can be used for treating prolong constipation without any side effects.  He says that the medical tools he carries in his treatment case are just honey and bandages! Dr. Molan treats so many diseases just with honey! And he says: “honey has a wonderful effect when treating burns and suppuration, it can be applied directly on burns to repair the skin and kill the bad bacteria, it removes the burn marks and you can see the burned part without marks or scars”

There are similarities between humans and bees.  Psychologists confirms that human in nature prefer natural substances for healing diseases, so we find human by nature accept honey and other natural substances more than the chemical ones..
After long experiments, Cancer specialist – Dr. Glenys Round- discovered something new about honey! He discovered the amazing effect of honey in treating cancer. He said that he used honey in treating skin cancer because honey penetrates through the skin and treats the cancer; something other medications failed to do.

He also confirmed that all the drugs failed to cure ulcers but finally ulcer is cured when honey was used. All the patients who were treated by honey were so happy during the treatment because they had no side effects and no pain.
In the USA, researchers could not find cure for some kind of germs, but now they try to utilize the antibiotics that exist in honey for disinfecting hospitals because they know for sure that they are one of the best antibiotics available.
Experts confirm that 6 Billion Dollar is spent per year on treating injuries and burns, and a big percentage of this money can be saved if honey is used instead, so honey can save money too.
Researchers found that honey had a healing power for treating stomach ulcer and throat infection. They found that germs usually stick together in a way to assure their existence and concentration, the scientific research proved that honey aparts, disintegrates, and weakens these germs defences so the body can kill them.  Lately, the scientists discovered stuff in honey that stops oxidation and therefore honey helps treating Cholesterol

Honey has ‘information’ that passes from the bee to the honey during the production process. This information is found in the flowers’ nectar.  Inside the belly of the bee, this information is interacted, modified, and increased in effectiveness so it becomes ready to use, and this is the secret of healing with honey. Allah the Almighty provided each bee with a special programs in its brain cells, which means that it performs something that has been already planned for it, and this is what is expressed in the Holey Qur’an: “And your Lord inspired the bees.”. This is a way planned earlier for the bee, it is an inspiration from Allah the Almighty in a method that we human can not understand!
Scientists wonder about the hidden healing power found in honey which can treat incurable diseases, and they ask: how does healing happen? What does honey do inside the cells of our bodies that lead to a sudden stop of cancer, cease the growth of so many bacteria in the body and activate the immunity system and make it more efficient? What does happen? No one knows

Allah the Almighty says, ‘And your Lord inspired the bees, saying: “Take you habitations in the mountains and in the trees and in what they erect.” “Then, eat of all fruits, and follow the ways of your Lord made easy (for you).” There comes forth from their bellies, a drink of varying colour wherein is healing for men. Verily, in this is indeed a sign for people who think’. (An-Nahl:68-69). We will find that Allah the Almighty has given honey its healing power through His word “Inspire”, therefore, it is important to recite some verses of Qur’an on the honey before we take it as a nutrient or a medication.

Despite the huge number of bees that participate in making the hive, we can not see problems or conflict in their work.  Scientists are amazed by how accurate their organization skills are, where they learned these principles, and how the bees can perform all these responsibilities efficiently without being trained to do so.  A bee is “programmed” to do this job: does not this witness omnipotence of Allah the Almighty?

Honey contains vitamin (B1) that is important for treating polyneuritis and limbs’ numbness.  It also contains vitamin (B2) needed for treating mouth ulcers, lip tearing, and Ophthalmia. Honey also contains various minerals like potassium, sodium, calcium, magnesium, iron, copper, phosphor, sulphate, which are required to calm patients with psychical disorders.
Honey is very important for infants to protect them from anaemia, cripple and enuresis. For infants below the age of one year, small amount needs to be taken.  Chewing little beeswax with pure honey helps to treat cold, coughing, throat infection, sinusitis, and rhinitis. Honey can also be used to treat muscular overstress, myospasm, liver diseases and toxicity. The bees take good care of their babies while at the same time produce honey.  Scientists say that a bee carries a very complex program in its brain; coincidence can not make such a program which is superior to a human brain in some aspects.  A bee is skilful beekeeper that takes care of the eggs and feeds the babies, protects them and looks after them until they grow.  Glory to Allah the Greatest! Despite all these proofs and there are still people who refuse to admit that Allah the Almighty exists!

In the Qur’an we find that the only nutrient with healing power that Allah the Almighty mentions is honey.  Allah the Almighty says “There comes forth from their bellies, a drink of varying colour wherein is healing for men” (An-Nahl:69). Following the recent discoveries, we find that today honey is used to treat burns, injuries, pyoderma, skin diseases and maintaining a healthy skin, freckles, hair loss and hair damage, enteritis, and various cancer diseases. The Prophet’s words above indicate the importance of using honey in treating digestion disorders.
The stomach complain that came in the Hadeeth above is the closest translation for the original Arabic word ‘istitlaq’, which is known today to be diarrhea. Studies showed that honey kills all types of germs especially the ones exist in the digestion system.  As a result, honey is considered effective in treating Diarrhea and stomach ulcer in a very short time. However, honey has a dual effect, it also treats constipation, it regulates the motion of the colon and influences the colon with the information that Allah the Almighty has designed it with.
Finally, we want to mention a hadeeth [narrated by Al-Bukhari] stated that the Prophet peace be upon him said, “There is cure in three substances, a drink of honey, a slash with a knife used for cupping and cauterizing by fire.  I forbid by nation from cauterizing by fire.”
Another hadeeth [narrated by Ibn Majah and others] stated that the Prophet peace be upon him said, “Make use of the two cures: honey and the Qur’an”

We recall Allah the Almighty says: “There comes forth from their bellies, a drink of varying colour wherein is healing for men. Verily, in this is indeed a sign for people who think. (An-Nahl: 69).
I strongly suggest we start using honey and the Qur’an for healing, something the Prophet peace be upon him advised us to do, then we can follow the path to healing.  From experience, when we recite Surat Al-Fatihah 7 times on the honey dissolved in water (honey drink), the drink will be affected by the reciting of the Qur’an. With Allah the Almighty will, the drink becomes more effective to heal from diseases.
————-