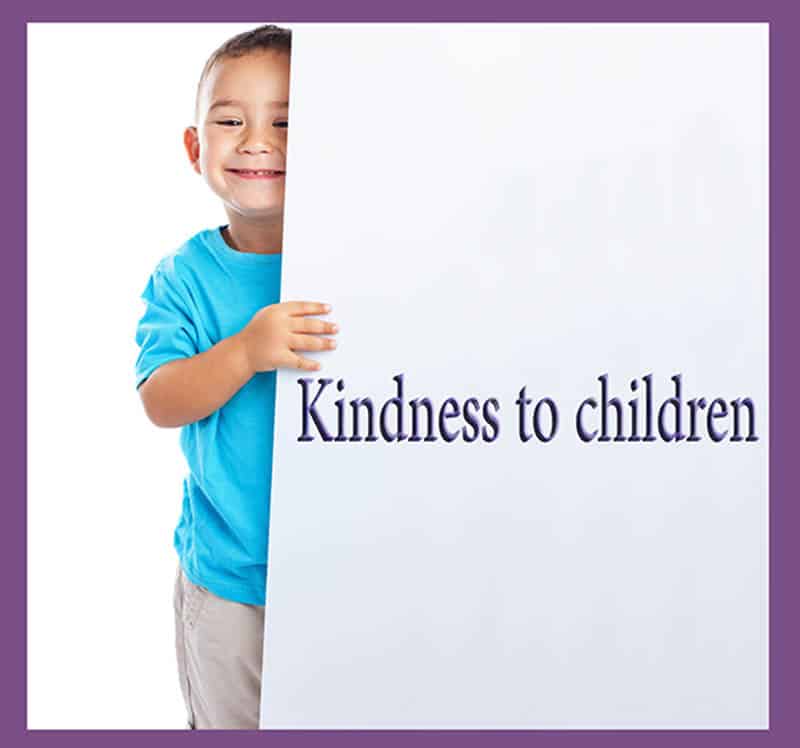 Abu Hurayrah  narrated: “Once the Prophet  and I went out during the day. While on the journey, he   did not talk to me and I did not talk to him. When we reached the market of Bani Qaynuqaa’, he  sat in the front-yard of Fatimah’s house and asked: ‘Is Luka’ home? (i.e., ‘the small boy’ – his grandson Al-Hasan)’ But Faatimah  kept the boy inside for a while. I thought she was either changing his clothes or giving him a bath. After a while, the boy came out running and the Prophet embraced him and kissed him on the mouth; then he  said: ‘O Allah! Love him, and love whoever loves him.'” [Al-Bukhari & Muslim] In other narrations of this incident, Al-Hasan  came out walking quickly and jumped into the lap of the Prophet  who had his arms extended towards him, and who then hugged and kissed him.

Abu Hurayrah  said: “After I heard the Prophet  saying this, there was nobody that I loved more than Al-Hasan.” He  also said: “It is never that I saw Al-Hasan after having heard this, except that I cried.”

The saying of Abu Hurayrah : “…He  did not talk to me…” was probably due to the Prophet  being busy thinking about something, or being inspired, or receiving revelation at the time.

As for his saying: “…and I did not talk to him…” is due to him  glorifying and honouring the Prophet ; this was the practice of the Companions  whenever they would see the Prophet  silent.

This narration is a reflection of how great the Prophet  was, due to his coming to visit this child, which illustrated the love and mercy that he  had for him. This was despite the great responsibilities he  had as a leader of the entire Nation and the fact that he  was busy being a guardian over their affairs, the custodian of their treasury, or Bayt Al-Mal, the dispatcher of the Muslim armies and the teacher and preacher to all the Muslims. Moreover, he  was also receiving revelation from his Lord and contemplating over what happened to the previous nations who disobeyed Him.

Despite all this, he  did not forget in the midst of all these tasks and responsibilities to check on his grandchild and try to bring joy to him, as well as checking on his daughter and son-in-law. He  sat in front of the house waiting for his grandchild to come out, and extended his arms towards him when he did so; he  hugged and kissed him, and this love was reflected and reciprocated by the reaction of the child who walked quickly and jumped into the lap of the Prophet .

Another narration that reflects the kindness that the Prophet  had for children is that which is narrated by Anas Ibn Malik  who said: “I never saw anyone kinder and more merciful with children than the Prophet . His son, Ibraheem, would breastfeed from a woman in the ‘Awali area of Madeenah; he  used to go and visit him and we would accompany him. He  used to enter the house in which Ibraheem was and find him with some splashes of the milk that he had drunk, on his face; he  would pick him up and kiss him.” ‘Amr  who was one of the Companions accompanying the Prophet  in his visits, said: “After the death of Ibraheem, the Prophet said: ‘Ibraheem is my son and he died whilst in the age of breastfeeding; he will have two women breastfeeding him in Paradise until he concludes the age of breastfeeding.’” [Muslim]

This narration reflects the noble manners of the Prophet and his kindness to children. It also highlights the virtue of being merciful with children and kissing them.

Ibraheem  died when he was sixteen or seventeen months old, which is why the Prophet  said that he died whilst at the age of breastfeeding, because the complete breastfeeding term is usually two full years, as mentioned in the Quran.

Many of those who are busy with worldly affairs or matters related to the religion are thereby deprived of other matters; they are busy teaching or leading others, or attaining wealth, and are thereby deprived from kissing their children, playing with them, and cultivating them properly. No matter how busy a person claims to be, it is impossible that he is busier than the Prophet  was, who had time for this despite his numerous and great responsibilities. The propagators of Islam, and others in general, have a duty towards their families and kinsfolk which they must fulfil, despite their responsibilities.

A child has a very special position in the Islamic community, and he should get the required attention and care which will make him grow up balanced and well mannered.

Unlike what some may believe, possessing manhood, dignity and honour does not contradict caring for and playing with children. This is reflected in the narration of Abu Hurayrah who said: “The Prophet  kissed Al-Hasan once while Al-Aqra’ Ibn Habis was sitting with him, so Al-Aqra’ said, `I have ten children; never did I kiss any of them.` The Prophet therefore looked at him and said: ‘Allah will  not be merciful with the one who is not merciful to others. ‘” [Al-Bukhari]

A person who works as a preacher in a prison in a western country said that an imprisoned drug addict once informed him that he would always stub out his cigarette on his child’s body, until he killed the child. This is truly an ugly face of the west that is reflected by this story; what kind of civilisation do they have? What benefit did they gain from their technology when their communities are overwhelmed with immorality, lack of faith, and children who are murdered and tortured like animals? This has become such a widespread phenomenon that there are now designated telephone numbers for children to call and seek help and protection if their parents harm or torture them.

But who are these children seeking protection from? It is from their own parents, who torture them in such a barbaric manner that it shatters the feelings of those who only get to hear about it.

The father’s love for his children should not be buried under his load of work, or his numerous tasks; on the contrary, he should express his love and kindness to them and strive to cultivate them properly.