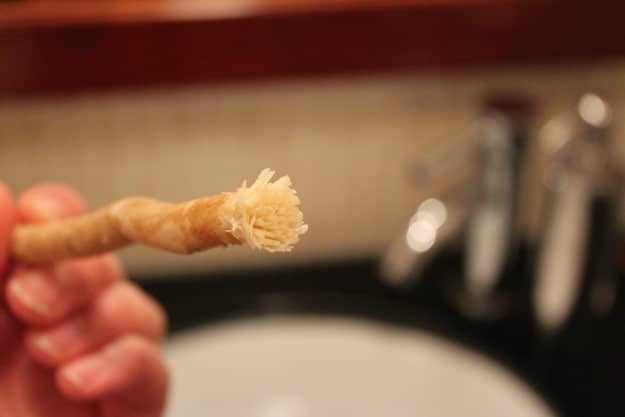 The Miswaak was known before Islam, but Islam added a religious perspective to its usage.

The Prophet Muhammad recommended Muslims to clean their teeth using a Miswaak every day; especially upon waking up, when performing ablution, before prayer, when reciting the Quran, before sleeping, when entering the house, and when the mouth has a foul odor.

There are many Prophetic narrations that talk about Miswaak. Following are some of them:

Furthermore, he  highlighted its importance, saying: “If it were not that it would create hardship for my people, I would have ordered them to use the Miswaak with every ablution and with every prayer.”[Al-Bukhari]

The Miswaak is a natural tool for brushing the teeth. It is taken from the roots and branches of particular desert trees. It differs from one region to another, but in Arabia and Asia it is taken from the Araktree. This is the most famous variety, and is the kind that was used by the Prophet .

Its scientific name is Salvadora Persica. It is a tree that grows in hot equatorial countries, especially in desert valleys. It is widespread in the South of Saudi Arabia, Yemen, Sudan, Egypt, and elsewhere.

Salvador Persica is an upright evergreen small tree or shrub, seldom more than one foot in diameter, reaching a maximum height of three meters. The leaves are small, oval, thick and succulent with a strong smell of cress or mustard.
The Miswaak is also obtained from other trees. In Africa, for example, it is cut from Lime and Orange trees, and in America some are cut from the Senna tree.

As the Arak tree is so well-known, and as it was the kind that the Prophet  used, it has been scientifically studied. The following summarize the various discoveries regarding Miswaak.

Physically, the Miswaak is a natural toothbrush. It is composed of a compact group of minute natural fibers that perform exactly the same function as a normal toothbrush except that it is made of natural rather than plastic fibers. For this reason it may be more gentle on the gums.

Miswaak’s natural toothpaste is made up of many substances that are important for cleaning teeth. Many researchers have studied the Miswaak in depth, and have proven that Miswaak contains over ten different natural chemical compounds considered essential for good oral and dental hygiene.

Some of these components are stain removers and teeth whiteners, some protect teeth against caries, some are bactericidal and antiseptic, some help in healing and to repair tissues, some promote remineralization (building) of tooth enamel, and some give the pleasant taste and smell.

Results of cytotoxictests showed no cytotoxic (cell damaging) effects from using freshly cut Miswaak. However, the same plant used 24 hours after cutting did contain harmful components. Based on these findings, researchers recommend cutting the used portion of the Miswaak after it has been used for a day and preparing a fresh part.

Scientific comparison between Miswaak and toothbrushes:

A clinical trial study on Ethiopian schoolchildren, comparing Miswaak with the conventional toothbrush, found Miswaak to be as effective as the toothbrush in removing oral deposits. The study also found instruction and supervision to be important since the children in the sample were not familiar with techniques for using Miswaak.

How to use Miswaak:

The method of preparing a Miswaak for use is to cut a branch or root of the Arak tree into pieces between 10 cm and 20cm in length, and between 4mm and 14mm in diameter. Occasionally some are thicker than this.

Fresh Miswaak is brown in color, with a hot, pleasant taste. People usually strip off some of the Miswaak’s thin bark from one end, then chew that end a little to separate the fibers so that they become like the fibers of a normal toothbrush. They then use it to brush their teeth.

A length of 15cm is recommended, which is convenient to grip, and easy to manipulate in a confined space. The diameter is normally less than 1 centimeter, which provides a supple stick firm enough to transmit the pressure of the cleansing action to the teeth without breaking.

Freshness: Miswaak should be freshly cut so that it is supple, easily chewed, and still rich in active constituents. The root should be whitish-brown in color; a dark brown color indicates that the Miswaak is no longer fresh.

If a stick is dry, the end for chewing should initially be soaked in fresh water for 24 hours. It should be noted that soaking for unduly long periods causes loss of active constituents and diminishes the therapeutic properties, although the mechanical effects on the teeth can still occur.

The end: Before Miswaak is used, the end should be washed with water. It is then chewed repeatedly until the fibers stand out like the bristles of a toothbrush. These fibers should be trimmed every 24 hours.

The techniques employed for removing plaque mechanically are similar to that for the toothbrush and the chewing stick; i.e., vertical and horizontal brushing. The cleaning movement should always be directed away from the gingival margin of the teeth (away from the gums) on both the buccal (outer cheek) and lingual (inner cheek) surfaces.

Care should be taken to avoid damaging the soft tissues of the mouth. Satisfactory cleaning can be achieved if this procedure is followed for five minutes.

There are two basic holds: Pen-grip (three-finger) or palm-grip (five finger-grip). In each case the aim is to ensure firm but controlled movement of the brush end of the Miswaak within the oral cavity, so that every area of the mouth is reached with relative ease and convenience.

When to use Miswaak:

In general, the Miswaak should be used a minimum of five times a day (i.e. before each prayer). However it is recommended to use it all the time, whenever possible.

Common mistakes in Miswaak use:

1. The end is either too thin or too thick.
2. Keeping it in the mouth while doing other things.
3. Not cutting the end every day.
4. Forgetting that teeth have five faces (inner, outer, two sides, and biting/chewing face), and only using Miswaak to clean the outer faces.