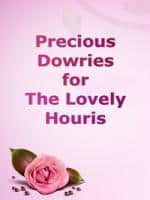 Interpretation of the Meaning:

The Noble Quran mentioned amazing attributes of the Houris. Such attributes capture the minds because of the beauty of the Creation of Allah, may He be Glorified. Blessed be Allah, the Great. In the Sunnah of the Prophet, we have a lofty description that captivates the souls by its eloquence and magnificent impact. Al-Bukhari reported on the authority of Annas bin Malik (may Allah be pleased with him) that the Messenger of Allah (صلى الله عليه وسلم) said:

(Interpretation): “…And if a houri from Paradise appeared to the people of the earth, she would fill the space between Heaven and the Earth with light and pleasant scent and her head cover is better than the world and whatever is in it.” (Al-Bukhari: 6567).

However, those Houris with wide lovely eyes require a precious dowry that the wise Muslim should be keen to obtain. Mu’adh bin Anas Al-Juhani narrated that the Messenger of Allah (صلى الله عليه وسلم) said:

(Interpretation): “Whoever suppresses his rage while he is able to unleash it, Allah will call him before the heads (leaders) of creation on the Day of Judgment, so that he can inform Him of which of the Huris he would like.” (At-Tirmizi: 2021) and authenticated by Al-Albani in (Sahih At-Targhib: 2753).

Therefore, dear Brother, suppressing anger is one of the loftiest qualities that a Muslim should have. It requires the Muslim to tame the soul on tolerance and forgiveness, especially while he is able to unleash his anger. The greatest incentive to suppress anger is reminding oneself how Allah, may He be Exalted, is Most Forbearing, Oft Forgiving towards us.

We supplicate Allah the Almighty to grant us good manners and to bestow upon us from His Great Bounty. All the praises and thanks be to Allâh, the Lord of all that exists, and may Peace and Blessings of Allah be upon our Prophet Muhammad, his Family, all of his Companions and pious followers until the Day of Judgment.