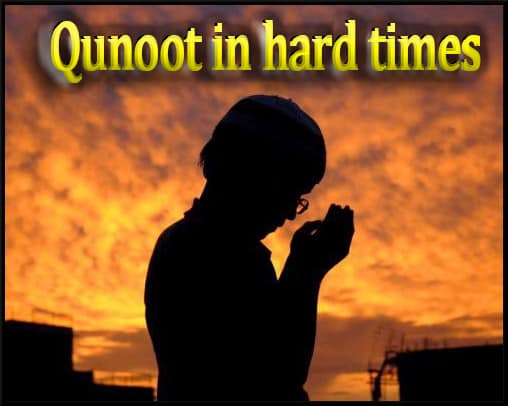 I ask about Du’a in hard times. There are some Ahadeeth in Saheeh Muslim which mentions that the Qunoot is Sunnah? Do we have to do it for every prayer?

All perfect praise be to Allah, The Lord of the Worlds. I testify that there is none worthy of worship except Allah, and that Muhammad is His slave and Messenger.

As a rule, Qunoot (supplication) is a Sunnah (tradition) of Prophet

. According to the opinion of Imam Ahmad and Imam Abu Hanefah

However, if any disaster or calamity befalls Muslims, such as epidemics, floods, fear from the enemy’s outrage, aggression, oppression or injustice, they are ordained to supplicate in Qunoot in the last Rak’ah of every obligatory prayer. Qunoot should be before or after the Rukoo’.

Here are some evidence regarding Qunoot:

1. It is narrated by Ahmad, Muslim, An-Nasa’i and Ibn Majah  on the authority of Anas  that the Prophet Muhammad  supplicated Qunoot for one whole month, calling down the wrath of Allah upon some Arab tribes (Arabs from Banu Sulaim, Rei’l and Thakwaan), then he  left it (didn’t supplicate Qunoot anymore). Al-Bukhari’s narration (reads); “He (the Prophet Muhammad ) supplicated with Qunoot when his  missionaries (Qurra’) were killed (by Arab tribes, Banu Sulaim, Rei’l and Thakwaan). I didn’t see him  more grieved of any incident as he  was in this incident.”

2. It is narrated by Ahmad, Muslim and at-Tirmithi  on the authority of Al-Bara’ Ibn ‘Aazeb  that the Prophet Muhammad  supplicated with Qunoot in Maghrib and Fajr prayers.

3. It is narrated by Ahmad and Abu Dawood  on the authority of Ibn Abbas  who said: “The Prophet  supplicated with Qunoot continuously during a whole month in Thuhr, Asr, Maghrib, ‘Ishaa, and Subh (Fajr) in the end of the prayer. He (the Prophet Muhammad ) recited (Qunoot) after raising from Rukoo’ in the last Rak’ah, and then he  called down the wrath of Allah upon Banu Sulaim, Rei’l, Thakwaan and ‘Osayyah, and the followers (his companions who were praying after him) were saying Ameen.“

4. Qunoot should be preformed in the last Rak’ah of Thuhr and ‘Ishaa prayer, and in the Fajr prayer after saying: ‘Sami Allahu Liman Hamidah’ (Allah hears the one who praises Him). The supplicant should pray for believers and invoke evil on infidels.