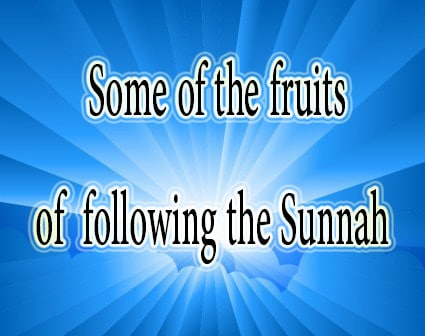 Respected reader, there are many fruits which result of following the Sunnah:

Reaching the stage of love, i.e. drawing closer to Allah. By performing additional prayers (nawafil), a believer attains Allah’s love. Ibn al-Qayyem, may Allah have mercy upon him, said: “Allah will not love you until you love His beloved (Prophet Muhammad, peace be upon him) both internally and externally, until you believe him, you obey his orders, reply to his call, you resort to his judgment, you prefer his love over the love of other human beings, and you give priority to being obedient to him. Otherwise, do not overburden yourself, go back to your previous state, and try to find some other pathway, but know you will not be on the right track if you do.”[1]

To gain the company of Allah, so that Allah guides him/her to success. Thus, the person’s organs will only do what Allah, the Almighty, pleases because if the person gains Allah’s love, he will also gain His company.

What indicates to these three fruits is the following:

Abu Hurairah, may Allah be pleased with him, reported that Allah’s Messenger, peace be upon him, said:

«The first thing the people will be held accountable for on the Day of Judgment is the prayer, Allah will say to His angels (even though he already knows): ‘Look at my servants prayers. Were they complete or not?’ If they were complete, it will be written as complete. If they were not fully complete, Allah will say: ‘See if my servant has voluntary prayers.’ If he has them Allah will say: ‘Complete the shortage of his obligatory prayers with his voluntary prayers.’ Then the rest of his deeds will be dealt with in the same manner.» [3].

The sparkle of the heart, as we already mentioned. Hence, if the worshipper is committing himself to the Sunnah, he is committing himself to everything. Thus, he would not neglect the religious obligations nor delay them and in turn, he would gain another virtue, i.e. to consider the rites of Allah as sacred. Therefore, his heart would be revived, and the one who neglects the Sunnah would be punished by losing the full reward of the obligation.

Being protected from falling into innovations in the religion, because as long as the slave follows the Sunnah and is eager to apply it, he will not follow anything else in his acts of worship. Accordingly, he will be saved against falling into the traps of innovation.

Maintaining the Sunnah and applying it has many benefits. Ibn Taymiyyah, may Allah have mercy upon him, said: “Anyone who follows the Prophet, peace be upon him, Allah will suffice him, guide him, and give him substance.”[4]

His disciple Ibn al-Qayyem said: “The one who accompanies the Qur’an and Sunnah and keeps his heart away from this worldly life and people, he has migrated with his heart to Allah and he is a successful and truthful person.” [5]