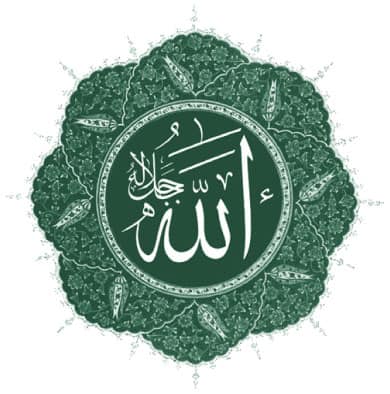 “…There is nothing whatever like unto Him, and He is the One that hears and sees (all things). Qur’an [42:11]
(Arabic transliteration: Laysa Kamithlihi Shayun Wa Huwa As-Sami’ ul-Basir)
NOTE:
Many different versions of the 99 names were found. Some other lists includes Al-Mu’tiy – The Bestower, The Giver and does not have Al-Ahad – The One. Another list did not have Al-Razzaaq -The Sustainer, The Provider but did have Al-Maajid The Noble, The One who is Majid.
Allah (subhanahu wa ta`ala)’s names are not limited to 99, which is a common misconception. There are a couple of evidences, one is the du`aa where one calls upon Allah by the names He (subhanahu wa ta`ala) has kept to Himself (obviously not taking these names since Allah has not revealed them to us); another is the fact that in the narrations of the famous ninety nine names hadith that do contain 99 names, the names are not consistent between narrations (for example, imam al-bayhaqi reports two versions of this hadith, with different 99 names in each). It is suggested by one commentator that the names were not explicitly stated by the rasul (sallallahu `alayhi wa sallam).