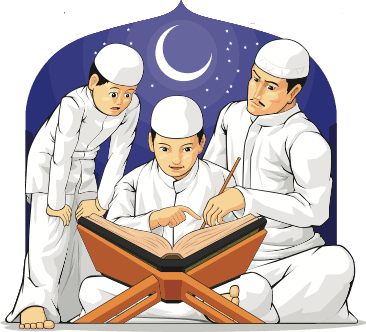 People cannot remain exactly as they were during the blessed month of Ramadan, in terms of their regularity and steadfastness in performing certain acts of worship. On the other hand, they must not stop doing good deeds completely and forsake all virtue just because Ramadan is over. It is injudicious to suddenly abandon everything and stop performing all goods deeds. Therefore, one should not abandon fasting, Qiyaam (optional night prayers), recitation of the Quran, supplication and so on. One needs to perform these deeds, even if it is on a less regular basis. If a slave of Allah The Almighty is accustomed to performing certain acts of worship and is compelled to stop doing them due to travel or sickness, then Allah The Almighty will continue to reward him for these deeds, even if he does not perform them, because he used to perform them frequently. The Prophet

said: “If a slave becomes sick, Allah Says to the honorable recording angels: `Record for my slave the same (good) deeds until I either take his soul (i.e., cause him to die) or grant him health (i.e., cure him from his sickness).” This indicates the benefit of constantly being engaged in acts of obedience and worship.

Continuing to be upon obedience to Allah The Almighty is a reason for one to be granted a good end, as the Prophet

said: “If Allah wills good for one of His slaves, He uses him.” He was asked, ‘How does He use him?’ He

replied: ‘He (i.e., Allah) enables him (i.e., the slave) to perform a righteous deed before his death, and then takes his soul whilst he is in that state.’” Thus, we should ensure being in a state of obedience and worship at all times. Moreover, the reward of being virtuous is greater at times when most people are heedless, as well as in harsh times. There is a great concept that we must always bear in mind: worship must be the essence of our lives, it is not an incidental matter, or a temporary one that is limited or restricted to a certain time or place.

Those who entered Ramadan upon disobedience and departed upon disobedience did not get any benefit from Ramadan whatsoever. This is a serious and dangerous matter because when describing the hypocrites, Allah The Almighty Says (what means): {And when they come to you, they say: ‘We believe.’ But they have entered with disbelief [in their hearts], and they have certainly left with it. And Allah is most knowing of what they were concealing.} [Quran 3:61]

said, “The hypocrites entered into the presence of the Prophet

and heard what he had to say, yet, they left upon the same state of disbelief, so the admonition did not yield any fruits with them.”

Therefore, anyone who departs from Ramadan without having improved in the least is the one being addressed in this verse. Those who begin the month whilst on disobedience and return to it as soon as it ends, or are even more disobedient afterwards, did not benefit from the month; they did not repent and refrain from sinning, nor did they show regret for their sins. It is as if the month was a temporary stage for them, after which their evil lifestyles continued. The question here is: did these people truly worship Allah The Almighty during this month as is His due to be worshipped? and did they obey Allah The Almighty, to begin with, during this month and fulfil His due rights?

It is a pity that an adulterer, or one who is used to consuming intoxicants, or dealing in Riba, resumes his regular behaviour and actions as soon as Ramadan is over. The same goes for those who waste their time in gatherings of useless talk, or who take holidays that have many things objectionable about them.

Some people mistakenly believe that the deeds they might have performed during Ramadan are enough to expiate their sins for the remaining eleven months of the year; they thus easily disobey Allah The Almighty before and after Ramadan. How can they guarantee the acceptance of their deeds during Ramadan to begin with? How do they know that Allah The Almighty did not reject all their deeds, let alone forgive their sins?

There are more serious matters as well, such as people eating during the days of Ramadan (i.e. breaking their fast) to please, for example, the disbelievers at their workplaces. Others have sexual intercourse with their spouses during the daytime, which is one of the worst ways of breaking a fast. Its expiation is that the person who does it should free a slave – a very severe punishment – and if he cannot find a slave, or is financially unable to free one, then he must fast for two consecutive months, and if he is physically unable to do so, then he must feed sixty poor or needy people. It is bad enough to have sexual intercourse with one’s own spouse during the daytime in Ramadan, so how would the case be, if it were adultery, fornication or sodomy?

So, who are the real winners after Ramadan? Allah The Almighty Says (what means):

* {…So he who is drawn away from the Fire and admitted into Paradise has attained [his desire]…} [Quran 3:185]

Allah The Almighty also Says regarding the dwellers of Paradise (what means): {For them will be gardens beneath which rivers flow. That is the great attainment.} [Quran 85:11]

Indeed, this is true success and real victory.