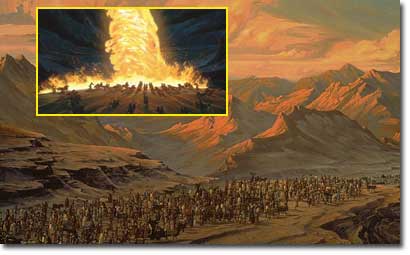 PROPHET MUSA (AS) AND SEA’S SPLITTING IN TWO
The kings of Egypt-known as “Pharaohs” (or “Fir’awn” in the Arabic of the Qur’an)-regarded themselves as divine in the polytheistic, superstitious religion of ancient Egypt. At a time when the people of Egypt favored a superstitious belief system over a divine belief system-the same era in which when the Children of Israel were enslaved-Allah sent the Prophet Musa (as) as a messenger to the tribe of Egypt.

The map shows the rou 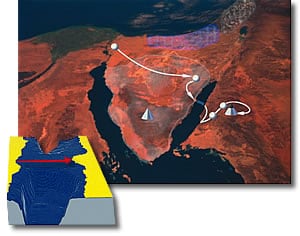 te taken by the Prophet Musa (as) after leaving Egypt and the estimated location of the site where the sea divided.

The diagram shows the shallow and deeper areas. It is at this point that the Sinai Peninsula and Arabia approach each other most closely.
As revealed in the Qur’an, the two communities met at the edge of the sea following this pursuit. Allah divided the sea and saved the Prophet Musa (as) and the believers with him, destroying Pharaoh and his people. This aid from Allah is revealed thus:
So We revealed to Musa, “Strike the sea with your staff.” And it split in two, each part like a towering cliff. And We brought the others right up to it. We rescued Musa and all those who were with him. Then We drowned the rest. There is certainly a Sign in that yet most of them are not believers. Truly your Lord is the Almighty, the Most Merciful. (Qur’an, 26:63-68)
In connection with this subject, the following account has recently been found in papyruses from the time of Pharaoh:
From Amenamoni, head of the protective books of the white room of the palace, to the scribe Penterhor:
When this letter reaches you and has been read point by point, surrender your heart to the sharpest pain, like a leaf before the storm, when you learn of the sorrowful disaster of the drowning in the whirlpool…
Calamity struck him suddenly and inescapably. Depict the destruction of the lords, the lord of the tribes, the king of the east and the west. The sleep in the waters has made something helpless out of something great. What news can compare to the news I have sent you?202
This miracle, experienced by the Prophet Musa (as) and the Children of Israel as they crossed the Red Sea, has been the subject of many studies. Archaeological investigations have established not only the path taken to the Red Sea after leaving Egypt, but also that the place where Pharaoh and the Prophet Musa (as) and his tribe met was one surrounded by mountains. (Allah knows best.)

The mountain known as Jabal-al Musa is generally regarded as being in the Sinai Peninsula. However, recent findings have shown that it is actually on the Arabian shore of the Red Sea.

Following a long and difficult journey for the Prophet Musa (as) and the Israelites, a  passage out betwee n the mountains could be seen.

That part of the Sinai Peninsula opening onto the Gulf.

Following a great deal of study and investigation taking this as the starting point,scientists ca me to striking conclusions with regard to how the sea was divided into two. These conclusions are in full agreement with those revealed in the Qur’an. The way that historical events described in the Qur’an are today illuminat ed by historical records is without doubt an important miracle of the book of Islam.

Pharaoh’s royal chariot is on display in a museum in Egypt. A similar example wasfound during excavations in the location where the sea divided.

Naum Volzinger and Alexei Androsov, two Russian mathematicians, proved that the Prophet Musa (as) could indeed have parted the sea. Unlike those scientists who concentrated on the probability of such a miracle, the Russian mathematicians investigated the conditions that might have led to the miracle. In turn, this led to the confirmation of the miracle itself.
According to the study which was published in the Bulletin of the Russian Academy of Sciences, there was a reef, which was close to the surface in the Red Sea at that time. From there, the scientists set about establishing the speed of the wind and the strength of the storm needed to leave the reef high and dry at low tide. As a result, it became apparent that a wind speed of 30 metres per second would have caused the sea to retract, leaving the reef exposed. Naum Volzinger, of the Institute of Oceanography of the Russian Academy of Sciences, stated that “if the [east] wind blew all night at a speed of 30 metres per second then the reef would be dry.” He also said that “it would take the Jews-there were 600,000 of them-four hours to cross the 7 kilometre reef that runs from one coast to another… then, in half an hour, the waters would come back.”203 In addition, Volzinger said that he and his colleague Androsov studied the issue strictly from Isaac Newton’s point of view. As he put it, “I am convinced that God rules the Earth through the laws of physics.”204
It must not be forgotten that there is always a possibility of this natural phenomenon taking place. If Allah so desires, this miracle can take place again when the requisite conditions-such as windspeed, time and place-are met. However, the truly miraculous aspect here is the fact that these events took place just when the Prophet Musa (as) and his tribe were about to be vanquished. The fact that the waters withdrew just as the Prophet Musa (as) and the community with him were about to cross them-not to mention the way that the waters returned just as Pharaoh and his army were crossing-is a clear example of the aid that Allah gives to the faithful. Indeed, the way that the Prophet Musa (as) relied on and trusted in Allah is an example of the most pleasing moral values:
And when the two hosts came into sight of one another Musa’s companions said, “We will surely be overtaken!” He said, “Never! My Lord is with me and He will guide me.” (Qur’an, 26:61-62)