Iron is one of the elements highlighted in the Qur’an. In Surat al-Hadid, meaning Iron, we are informed:
And We also sent down iron in which there lies great force and which has many uses for mankind… (Qur’an, 57:25)

The word “anzalna,” translated as “sent down” and used for iron in the verse, could be thought of having a metaphorical meaning to explain that iron has been given to benefit people. But, when we take into consideration the literal meaning of the word, which is, “being physically sent down from the sky,” as in the case of rain and Sun rays, we realize that this verse implies a very significant scientific miracle. Because, modern astronomical findings have disclosed that the iron found in our world has come from giant stars inouter space.38

Not only the iron on earth, but also the iron in the entire Solar System, comes from outer space, since the temperature in the Sun is inadequate for the formation of iron. The sun has a surface temperature of 6,000 degrees Celsius, and a core temperature of approximately 20 million degrees. Iron can only be produced in much larger stars than the Sun, where the temperature reaches a few hundred million degrees. When the amount of iron exceeds a certain level in a star, the star can no longer accommodate it, and it eventually explodes in what is called a “nova” or a “supernova.” These explosions make it possible for iron to be given off into space.39
One scientific source provides the following information on this subject:
There is also evidence for older supernova events: Enhanced levels of iron-60 in deep-sea sediments have been interpreted as indications that a supernova explosion occurred within 90 light-years of the sun about 5 million years ago. Iron-60 is a radioactive isotope of iron, formed in supernova explosions, which decays with a half life of 1.5 million years. An enhanced presence of this isotope in a geologic layer indicates the recent nucleosynthesis of elements nearby in space and their subsequent transport to the earth (perhaps as part of dust grains).40 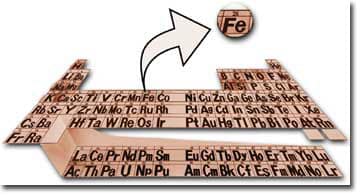 Surat al-Hadid is the 57th in the Qur’an. The numerical value of the word “al-Hadid” in Arabic is 57. The numerical value of “hadid” on its own is 26. As can be seen from the periodic table to the side, 26 is the number of the iron atom. With the verse revealed in Surat al-Hadid Almighty Allah indicates how iron formed, and with the mathematical code contained in the verse He reveals to us a scientific miracle.

All this shows that iron did not form on the Earth, but was carried from Supernovas, and was “sent down,” as stated in the verse. It is clear that this fact could not have been known in the 7th century, when the Qur’an was revealed. Nevertheless, this fact is related in the Qur’an, the Word of Allah, Who encompasses all things in His infinite knowledge.
Astronomy has also revealed that other elements also formed outside the Earth. In the expression “We also sent down iron” in the verse, the word “also” may well be referring to that idea. However, the fact that the verse specifically mentions iron is quite astounding, considering that these discoveries were made at the end of the 20th century. In his book Nature’s Destiny, the well-known microbiologist Michael Denton emphasizes the importance of iron:
Of all the metals there is none more essential to life than iron. It is the accumulation of iron in the center of a star which triggers a supernova explosion and the subsequent scattering of the vital atoms of life throughout the cosmos. It was the drawing by gravity of iron atoms to the center of the primeval earth that generated the heat which caused the initial chemical differentiation of the earth, the outgassing of the early atmosphere, and ultimately the formation of the hydrosphere. It is molten iron in the center of the earth which, acting like a gigantic dynamo, generates the earth’s magnetic field, which in turn creates the Van Allen radiation belts that shield the earth’s surface from destructive high-energy-penetrating cosmic radiation and preserve the crucial ozone layer from cosmic ray destruction…
Without the iron atom, there would be no carbon-based life in the cosmos; no supernovae, no heating of the primitive earth, no atmosphere or hydrosphere. There would be no protective magnetic field, no Van Allen radiation belts, no ozone layer, no metal to make hemoglobin [in human blood], no metal to tame the reactivity of oxygen, and no oxidative metabolism.
The intriguing and intimate relationship between life and iron, between the red color of blood and the dying of some distant star, not only indicates the relevance of metals to biology but also the biocentricity of the cosmos…41
This account clearly indicates the importance of the iron atom. The fact that particular attention is drawn to iron in the Qur’an also emphasises the importance of the element. In addition, there is another hidden truth in the Qur’an which draws attention to the importance of iron: Surat al-Hadid 25, which refers to iron, contains two rather interesting mathematical codes.
“Al- Hadid” is the 57th sura in the Qur’an. The abjad of the word “Al-Hadid” in Arabic, when the numerological values of its letters are added up, is also 57. (For abjad calculations see the section on Numerological Calculations (Abjad) in the Qur’an.)
The numerological value of the word “hadid” alone is 26. And 26 is the atomic number of iron.
Moreover, iron oxide particles were used in a cancer treatment in recent months and positive developments were observed. A team led by Dr. Andreas Jordan, at the world famous Charité Hospital in Germany, succeeded in destroying cancer cells with this new technique developed for the treatment of cancer-magnetic fluid hyperthermia (high temperature magnetic liquid). As a result of this technique, first performed on the 26-year-old Nikolaus H., no new cancer cells were observed in the patient in the following three months.
This method of treatment can be summarised as follows:
1. A liquid containing iron oxide particles is injected into the tumour by means of a special syringe. These particles spread throughout the tumour cells. This liquid consists of thousands of millions of particles, 1,000 times smaller than the red blood corpuscles, of iron oxide in 1 cm3 that can easily flow through all blood vessels.42
2. The patient is then placed in a machine with a powerful magnetic field.
3. This magnetic field, applied externally, begins to set the iron particles in the tumour in motion. During this time the temperature in the tumour containing the iron oxide particles rises by up to 45 degrees.
In a few minutes the cancer cells, unable to protect themselves from the heat, are either weakened or destroyed. The tumour may then be completely eradicated with subsequent chemotherapy.43
In this treatment it is only the cancer cells that are affected by the magnetic field, since only they contain the iron oxide particles. The spread of this technique is a major development in the treatment of this potentially lethal disease. In the treatment of such a widespread disease as cancer, the use of the expression “iron in which there lies great force and which has many uses for mankind” (Qur’an, 57:25) in the Qur’an is particularly noteworthy. Indeed, in that verse, the Qur’an may be indicating the benefits of iron for human health. (Allah knows best.)