In one verse, we are informed that mountains are not motionless as they seem, but are in constant motion.
You see the mountains you reckoned to be solid going past like clouds. (Qur’an, 27:88) 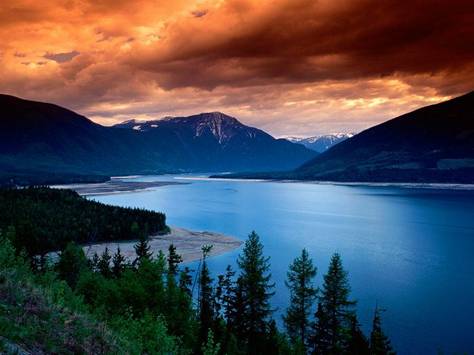 This motion of mountains is caused by the movement of the Earth’s crust that they are located on. The Earth’s crust “floats” over the mantle layer, which is denser. It was at the beginning of the 20th century when, for the first time in history, a German scientist by the name of Alfred Wegener proposed that the continents of the Earth had been attached together when it first formed, but then drifted in different directions, and thus separated as they moved away from each other.
Geologists understood that Wegener was right only in the 1980s, 50 years after his death. As Wegener pointed out in an article published in 1915, the land masses on the Earth were joined together about 500 million years ago, and this large mass, called Pangaea, was located in the South Pole.
Approximately 180 million years ago, Pangaea divided into two parts, which drifted in different directions. One of these giant continents was Gondwana, which included Africa, Australia, Antarctica and India. The second one was Laurasia, which included Europe, North America and Asia, except for India. Over the next 150 million years following this separation, Gondwana and Laurasia divided into smaller parts.
These continents, that emerged after the split of Pangaea, have been constantly moving on the Earth’s surface at a rate of several centimetres per year, and in the meantime changing the sea to land ratios of the Earth. 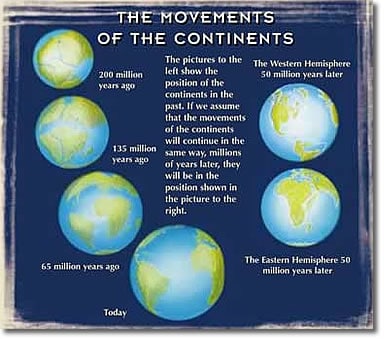 Discovered as a result of the geological research carried out at the beginning of the 20th century, this movement of the Earth’s crust is explained by scientists as follows:
The crust and the uppermost part of the mantle, with a thickness of about 100 kms., are divided into segments called plates. There are six major plates, and several small ones. According to the theory called plate tectonics, these plates move about on Earth, carrying continents and ocean floor with them. Continental motion has been measured at from 1-5 cm per year. As the plates continue to move about, this will produce a slow change in Earth’s geography. Each year, for instance, the Atlantic Ocean becomes slightly wider.29
There is an important point that needs to be stated here: Allah referred to the motion of mountains as drifting in a verse of the Qur’an. Today, modern scientists also use the term “continental drift” for this motion.30
Continental drift is something that could not have been observed at the time of the revelation of the Qur’an, though Allah clearly indicated how it was to be understood: “You see the mountains you reckoned to be solid” in the verse. Though, He further described this action in the following verse, stating that the mountains were going past like clouds. As has been indicated, attention is clearly drawn to the movement of the layer in which the mountains are fixed.
It is without doubt a great miracle that this scientific fact, only recently discovered by science, should have been revealed in the 7th century, when conceptions of the nature of the universe were based on superstition and myth. This is another very important proof that the Qur’an is the word of Allah.