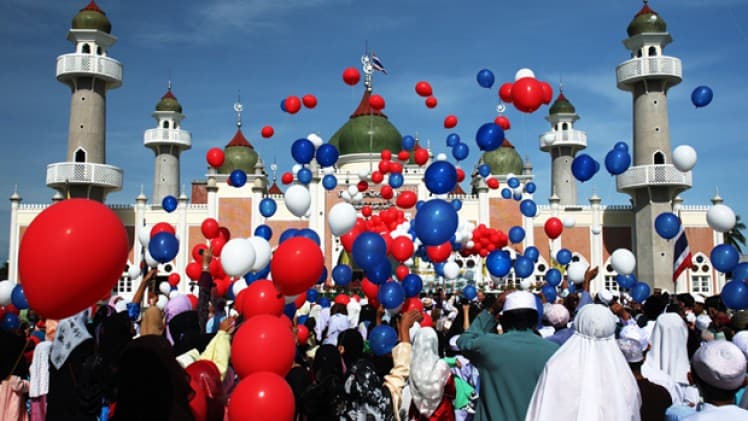 Dear brother: We greet you with the Islam greeting and say to you: peace, mercy and blessings of Allah be upon you. And we congratulate you in advance for ‘Eid Al-Adha and say to you: may Allah accept from you and us our good deeds, and we hope that you would accept our message to you which we invoke Allah to be useful for you and for all the Muslims everywhere.

The slaughtering of sacrifice: It is done after the ‘Eid prayer, as the Messenger of Allah, prayer and peace of Allah be upon him, said: “If someone slaughters before praying, he must slaughter again and if he did not slaughter, he must do after it (the ‘Eid prayer).” [Reported by Al-Bukhari and Muslim]   «من ذبح قبل أن يصلي فليعد مكانها أخرى، ومن لم يذبح فليذبح» رواه البخاري ومسلم   The time of sacrifice is four days: the sacrifice day and the three days of Tashreeq.   Showering, wearing perfume and wearing the best clothes: Without exaggeration or being too long (for clothes), or shave the beard as it is prohibited. As for women, they can go to the ‘Eid prayer in the Masjid without using makeup or wearing perfumes for that it is not suitable for them to go for praying and showing obedience to Allah while doing these sins.

Eating from the sacrifice: The Messenger of Allah, prayer and peace of Allah be upon him, did not eat till he returned from the ‘Eid prayer to eat from his sacrifice [Zad Al-Mi’ad: 441/1].   Going to the place of the feast prayer on foot, if possible.   It is from the Sunnah to pray in the place of the ‘Eid prayers except when there is an excuse like rain, so you can pray in the Masjid as the Messenger did.   Praying with Muslims in congregation and attending the ‘Eid sermon is preferable: That is advised by the incontestable scholars like Ibn-Taymiyyah who said that the ‘Eid prayer is compulsory as Allah says: {Therefore turn in prayer to your Lord and sacrifice (to Him only).} [Surah Al-Kauthar 108:2], and it cannot be dropped except if there is an excuse. {فَصَلِّ لِرَبِكَ وَانحَر} الكوثر: 2   Transliteration: Faşalli Lirabbika Wa Anĥar   Women witness the feast with men even during their menstruation and the emancipated slaves, but women on their menstruation period should not perform the prayer.

Verily, He likes not Al-Musrifûn (those who waste by extravagance).} [Surat Al-`An’âm 6:141]   {وَلا تُسرِفُوا إِنّهُ لا يُحِبُّ المُسرِفِينَ} الأنعام: 141   Transliteration: Wa Lā Tusrifū ‘Innahu Lā Yuĥibbu Al-Musrifīn   Finally, don’t forget, my Muslim brother, to comply with good deeds like keeping good relations with relatives and visiting them, leaving hatred and envy and purifying one’s heart from them, helping orphans and the poor, making them happy and being kind to them.   We ask Allah to guide us to what He likes and Be satisfied with us, help us know our religion well, and to make us from those who do righteous deeds on the ten days of Dhul Hijjah purely for Him.