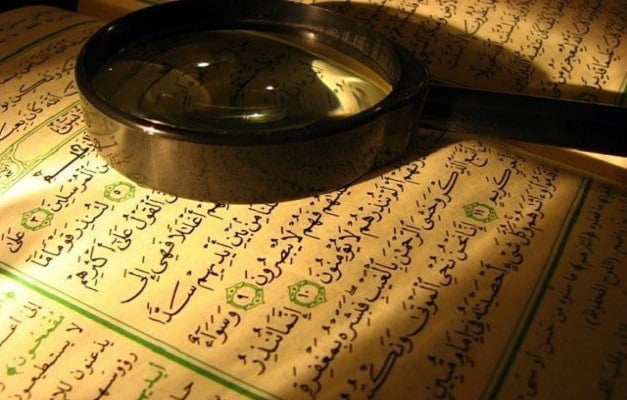 ‘Translation’ {Falsehood cannot approach it from before it or from behind it} [Fussilat:42].

Allah The Almighty Confirms this fact, when He Says:

‘Translation’ {And if any one of the polytheists seeks your protection, then grant him protection so that he may hear the Words of Allah} [At-Tawba:6].

‘Translation’ {Those who remained behind will say when you set out toward the war booty to take it, “Let us follow you.” They wish to change the Words of Allah} [Al-Fath:15].

Those two verses prove that the Quran is the Words and Speech of Allah The Almighty that He Has Revealed to His Prophet Muhammad, peace and blessing be upon him. Jaabir ibn ‘Abdullaah, may Allah be pleased with him, reported that the Prophet, peace and blessing be upon him, used to invite people to Islam during the Hajj season and would say: «Who are willing to give me asylum so that I can convey the Speech of my Lord, for the Quraysh have prevented me from conveying the Speech of my Lord» (At-Tirmithi and Ahmad).

Hence, the Quran is the Speech of Allah as unanimously agreed upon by all Muslims.
This fact is supported by several logical and tangible evidences including the following:

– The polytheists failed to produce a single verse, let alone a single Soorah, let alone a whole book like the Quran despite the fact that they were utterly determined and extremely motivated to oppose and falsify the call of the Prophet, peace and blessing be upon him. Furthermore, we must remember that they were the masters of the Arabic language, in which the Quran was revealed. Certainly, this constitutes a definitive proof that the Quran is the Speech of Allah The Lord of The Worlds, not that of humans.

– The Quran foretold many matters of the unseen and made several prophecies that were all fulfilled exactly as they were foretold. For example, the Persians defeated the Byzantines in one of their battles and the Quran recorded this defeat foretelling that the Byzantines would defeat the Persians within three to nine years and this is what actually happened. Allah The Exalted Says:

‘Translation’ {The Byzantines have been defeated .  In the nearest land. But they, after their defeat, will overcome . Within three to nine years} [Ar-Rum:2-4].

– The Quran includes many miraculous scientific facts that were only discovered fourteen centuries later. For example, the Quran told us about a barrier separating the salty water from the fresh water not to mix with each other. Allah The Exalted Says:

‘Translation’ {He Released the two seas, meeting (side by side); .  Between them is a barrier (so) neither of them transgresses} [Ar-Rahman:19,20]. After about fourteen centuries, modern science confirmed this scientific fact.

– When one reads the Book of Allah, he goes into a state of peace and tranquility unlike the human speeches or writings. Allah The Exalted Says:

– The Quran is also a cure and it expels the devils when it is recited. Allah The Almighty Said:

‘Translation’ {And We send down of the Quran that which is healing and mercy for the believers…} [Al-Isra:82].

Of course, it is almost impossible to list all the evidences that prove that the Quran is the Speech of Allah in this article; however, we will conclude with the words of Al-Waleed ibn Al-Mugheerah, who was one of the senior leaders of the polytheists of Quraysh, about the Quran. He said: “What can I say? Whether it is about prose or poetry, or the poems of the Jinns, I possess greater knowledge than any other man. By God! The words spoken by this man can not be compared with any of the others. By God, his words possess a charming sweetness and a particular beauty. The branches of his speech are laden with fruit while its roots are firmly entrenched in the soil from whence it proceeds. It is superior to all other discourses, and it is not possible for any other discourse to show it in poor light. For a surety it will conquer anything that comes under its own influence!” (Al-Haakim and Al-Bayhaqi).

This is the Quran, the Speech of Allah that has been challenging humankind and proving its inability to produce something to its effect as to its eloquence, wise judgments, and authentic news. The challenge is still raised, and the inability of mankind to face that challenge remains. Thus, the Quran will remain the everlasting Argument of Allah The Almighty against all opponents and disbelievers.