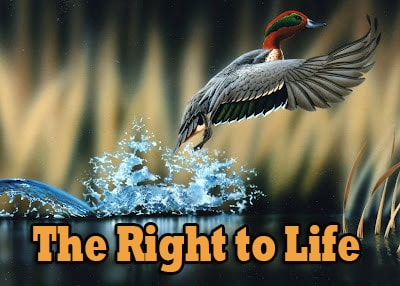 Allah Almighty honored man and created him with His own Hand and blew into him from His Spirit. Then, He made His angels prostrate to him and subjected to him all that is in the heavens and the earth – all from Him. Moreover, He made him a successor on earth and bestowed talents and blessings upon him so that he can dominate the earth. He preferred him over all beasts and animals. Man cannot fulfill his goals unless he takes his rights in full. At the forefront of these rights, which are guaranteed by Islam, is the right to life – an inviolable right.

Allah, the Exalted, says (what means): {And do not kill the soul which Allah has forbidden [to be killed] except by [legal] right.} [Quran 6:151]. The right that permits the taking of souls was explained by the Prophet   when he reportedly said: “It is not permissible to spill the blood of a Muslim except in three cases: the married person who commits adultery, a life for a life, and the one who forsakes his religion and separates from the group.” [Muslim]

Out of its great concern for the protection of life, Islam threatens those who deem it permissible to kill with the severest punishment. In the Quran, Allah Almighty says (what means): {But whoever kills a believer intentionally – his recompense is Hell, wherein he will abide eternally, and Allah has become angry with him and has cursed him and has prepared for him a great punishment.} [Quran 4:93]

Moreover, it is clearly indicated in authentic hadiths that killing a believer is one of the gravest sins. In a hadith via Al-Bara’ ibn ‘Azib, may Allah be pleased with him, the Prophet   said: “If this world were to be destroyed, that would be less significant before Allah than the unlawful killing of a believer.” [Ibn Majah] In another hadith on the authority of Abu Sa‘eed Al-Khudri, may Allah be pleased with him, the Prophet   said: “If the inhabitants of the heavens and the inhabitants of the earth all took part in shedding the blood of a believer, then Allah would cast them (all) in the Fire.” [At-Tirmithi] Also, Ibn ‘Umar, may Allah be pleased with him, narrated that the Prophet   said: “He who helps in (the spilling of) the blood of a Muslim, even with half a word, it will be written between his eyes on the Day of Judgment ‘Desperate of the mercy of Allah’.” [Al-Bayhaqi]

The Noble Quran prohibits us from killing our children out of fear of poverty and starvation. A Quranic verse reads (what means): {And do not kill your children for fear of poverty. We provide for them and for you. Indeed, their killing is ever a great sin.} [Quran 17:31] In another verse that speaks about a common practice among the Arabs during the pre-Islamic era of ignorance, Allah, The Exalted, says (what means): {And when the girl [who was] buried alive is asked for what sin she was killed.} [Quran 81:8-9] This equally applies to the non-Muslims who live under the rule of a Muslim nation and enter into an agreement of protection with the Muslim ruler – be they Jews or Christians. ‘Abdullah ibn ‘Amr ibn Al-‘As, may Allah be pleased with him, narrated that the Prophet   said: “Whoever killed a mu‘ahid (a person who is granted the pledge of protection by the Muslims) shall not smell the fragrance of Paradise, even though its fragrance can be smelt at a distance of forty years.” [Al-Bukhari] Moreover, Allah, the Exalted, says (what means): {So if they remove themselves from you and do not fight you and offer you peace, then Allah has not made for you a cause [for fighting] against them.} [Quran 4:90]

Hence, Allah Almighty legislated retribution and the killing of the intentional killer as a revenge from him and purification for society. Allah Almighty says (what means): {And there is for you in legal retribution [saving of] life, O you [people] of understanding, that you may become righteous.} [Quran 2:179] Even in manslaughter, Allah, the Exalted, does not exempt the killer from liability. Rather, He made it obligatory upon him to set a slave free and give ransom. If he cannot free a slave, he is required to fast for two consecutive months. Ransom for manslaughter is ordained by Islam so that people do not take life lightly and to inspire respect for the human soul.

Undoubtedly, the first thing about which the servants will render account on the Day of Judgment is murder. The erudite Andalusian scholar Ibn Hazm   said: “I do not know of any sin, after polytheism, greater than killing a believer without right or abandoning prayer.” The Prophet   is reported to have said: “Every sin may be forgiven by Allah except a man who dies as a disbeliever or a man who kills his (Muslim) brother.” [An-Nasa’i] In another hadith, he   said:  “A servant continues to guard his faith (and thus hopes for the mercy of Allah) so long as he does not shed blood unjustly.” [Al-Bukhari & Muslim] This is Islam. It came to preserve the human soul and the blood of Muslims, lest people may take Muslim blood lightly.