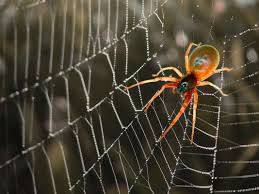 {…And indeed, the weakest of homes is the home of the spider, if they only knew.} [Surat Al-’Ankabût (The Spider): 41]
{…وَإِنَّ أَوْهَنَ الْبُيُوتِ لَبَيْتُ الْعَنكَبُوتِ ۖ لَوْ كَانُوا يَعْلَمُونَ} العنكبوت: 41
Transliteration: wainna awhana albuyooti labaytu alAAankabooti law kanoo yaAAlamoona
This Qura’nic verse appears at the beginning of the second part of Surat al-’Ankabût (The Spider). It is a Makkan surah and has a total number of 69 ayahs following the Basmalah. This surah was named as such because it compares disbelievers and polytheists, who seek protection and support in things or people rather than in Allah (SWT), to the spider that seeks refuge in its house, the flimsiest of houses. This is the only verse in which the spider is mentioned in the whole of the noble Qur’an.
The main theme of this surah is believing in Allah (SWT). It tackles the ordeals inflicted upon believers because of their faith and what they might go through as a result of holding on to Allah’s religion and calling others to embrace it. This is all due to the inevitable conflict between right and wrong, and between the followers of both paths.
To emphasize this worldly custom, the surah describes what happened to some of Allah’s Prophets and Messengers who were hindered on their paths of calling to Allah (SWT). It also presents examples of tyrannical characters and nations, severely punished for their sins. It demeans those disbelievers and polytheists and sets them as an example before everyone. Moreover, Surat Al-’Ankabût links the righteousness in Allah’s religion to that in the heavens and on earth. It asserts the Oneness of Allah (SWT) and unifies the divine messages. The surah also calls upon believers to hold on to their religion, or to emigrate at times of affliction, while still holding on to their faith. Surat Al-’Ankabût glorifies jihad (the struggle for the sake of religion) and the mujahidin (strugglers) striving to serve Allah (SWT). The surah confirms that ordeals are essential in life and lays stress on the responsibility of individuals, and the individuality of consequences. It clarifies the destinies of the believers, hypocrites, and disbelievers. Finally, the surah concludes with how Allah (SWT) brings forth to the mujahidin good tidings and instills firmness in their faith.
Signs of Creation in Surat Al-Ankabût:
1.It asserts that only Allah (SWT) can easily create and recreate. This can be seen at a smaller scale in the endless cycle of life and death that takes place through the constant process of reproduction, for as long as Allah (SWT) wills. Moreover, there is the cycle of creation of celestial bodies, their destruction, disappearance into the cosmic cloud of dust, and recreation from this same dust. The water cycle around the earth is a case in point, and so are the cycles of rocks and the cycles of the earth’s surface formulation. Furthermore, there is the creation of matter and energy, their interchange, their extermination and recreation, in addition to other cycles as well.
2.It indicates that wandering around in the land, meditating on rocks and studying the evidences of life on such rocks, are the means by which man can get to know the history of the earth and the truth about the origins of life. Such facts were verified by studies conducted in the field of Geology.
3.It confirms that recreation in the hereafter, following the destruction of the universe, shall follow the same path by which creation originated.
4.It asserts that the spider’s web is the flimsiest of all houses, on both the physical and spiritual levels. This was ascertained by recent studies in the field of Zoology.
5.There are also several historical and psychological signs directly related to scientific research. However, they are not of relevance to the topic we are currently looking; the signs of creation in the noble Qur’an.
Since each of the above statements requires a separate explanation on its own, I shall focus here on the issue of the weak nature of the spider’s web, which Allah (SWT) used as an example in the 41st ayah of Surat Al-’Ankabût. Accordingly, it is important to quickly review the interpretations made by a number of scholars in this context.
The Scholars’ Interpretations:
{The example of those who take allies other than Allah is like that of the spider who takes a home. And indeed, the weakest of homes is the home of the spider, if they only knew.} [Surat Al-’Ankabût (The Spider) 29:41]
{مَثَلُ الَّذِينَ اتَّخَذُوا مِن دُونِ اللَّـهِ أَوْلِيَاءَ كَمَثَلِ الْعَنكَبُوتِ اتَّخَذَتْ بَيْتًا ۖ وَإِنَّ أَوْهَنَ الْبُيُوتِ لَبَيْتُ الْعَنكَبُوتِ ۖ لَوْ كَانُوا يَعْلَمُونَ} العنكبوت: 41 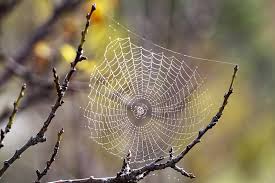