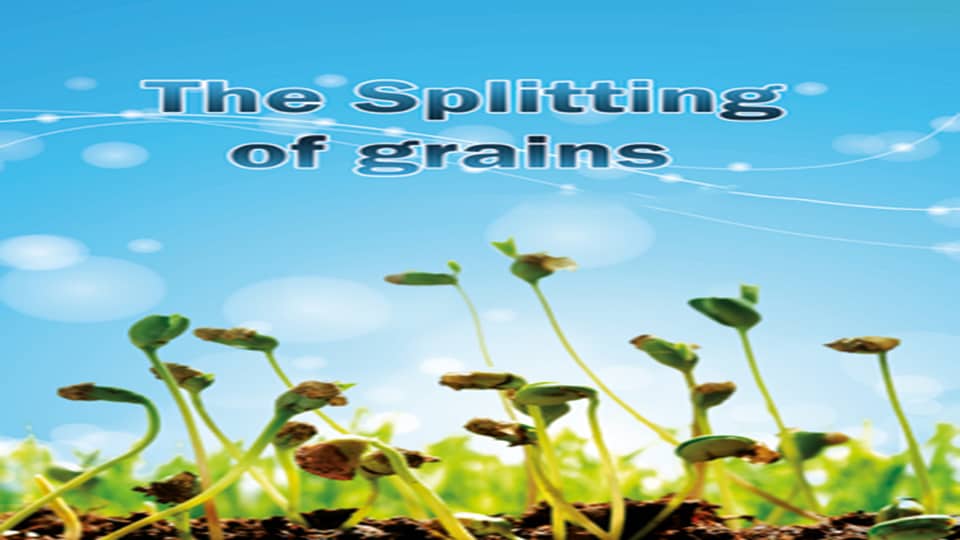 {Verily! It is Allah Who causes the seed-grain and the fruit-stone (like date-stone, etc.) to split and sprout.} [Surat Al-An’âm (The Cattle) 6:95]

This ayah comes in the beginning of the second half of Surat al-An’am. This surah was revealed in Makkah. It is one of the longest surahs of the Ever-Glorious Qur’an. It consists of 165 ayahs. It was named al-An’am because of the numerous times this word is mentioned throughout the surah. This surah was uniquely revealed all at once.

Some Interpretations by Scholars of This Ayah:

According to Mukhtasar Tafsir Ibn Kathir (The abridged edition of the Qur’anic Exegesis by Ibn Kathir) throughout this ayah Allah (SWT) states that He splits the seed-grains and fruit-stones while they are in the soil. As a result, various types of plants begin to germinate from the seed-grains, whereas fruits of various colors, shapes and tastes germinate from the fruit-stones.
Mukhtasar Tafsir Al-Jalalain (The abridged edition of the Qur’anic Exegesis by Jalal Ad-din As-siyuti and Jalal Ad-Din Al-Mahilli) states that the ayah {Verily! It is Allah Who causes the seed-grain and the fruit-stone (like date-stone, etc.) to split and sprout.} [Surat Al-An’âm (The Cattle) 6:95]
{إِنَّ اللَّـهَ فَالِقُ الْحَبِّ وَالنَّوَىٰ} الأنعام: 95
Transliteration: Inna Allaha faliqu alhabbi waalnnawa
Means that Allah splits the seed-grain from which plants germinate and the fruit-stone from which (palm) trees germinate.
In his book, Fi Dhilal Al-Qur’an, (In the Shade of the Qur’an), Sayyid Qutb said, “Life, its creation and development, is a miracle whose secret no one can know, much less make it. There is a miracle whenever a growing plant splits from a dormant seed-grain and an elongating tree splits from a latent fruit-stone. The potential life of the seed-grain and the fruit-stone along with the growing life of plants and trees is a secret whose reality and source are known only to Allah, the Omniscient, the Omnipotent.
“In spite of all the phenomena and forms of life that human beings had and all the characteristics and phases of life they studied, they are still, like the first human being, unable to reveal the secret of life; they just understand the appearance and functions of life, but they know nothing about its source and essence. Nevertheless, life goes on and the miracle occurs in an instant.”

Safwat Al-Bayan Li-Ma’ani Al-Qur’an (The Elite Interpretation of the Meanings of the Qur’an) states that, {Verily! It is Allah Who causes the seed-grain and the fruit-stone (like date-stone, etc.) to split and sprout.} [Surat Al-An’âm (The Cattle) 6:95]
{إِنَّ اللَّـهَ فَالِقُ الْحَبِّ وَالنَّوَىٰ} الأنعام: 95
Transliteration: Inna Allaha faliqu alhabbi waalnnawa
embarks on showing the evidence of Allah’s Omnipotence, Omniscience and Wisdom after affirming the evidence of monotheism and Prophethood. “The author further stated that, “(Causes … to split) means that Allah splits the lifeless seed-grain, such as that of the buckwheat, causing the green plants to germinate. He, the Almighty, also splits the lifeless fruit-stone causing palm trees and other trees to germinate.”
The Scientific Implications of the Ayah
Plant seeds have two distinct names in Arabic: habb (seed-grains or pits) and nawa (fruit-stones). The first term, habb, denotes the seeds of the edible crops such as wheat (buckwheat), barley, corn, and oats. All of these crops belong to the vascular flowering plants that have a single cotyledon in the seed. The term also includes the dicotyledonous seeds that can be found in, for example, the leguminous seeds such as beans, okra, chick peas, peas, green beans, black-eyed peas, lentils, lupine, soybeans, peanuts and fenugreek. Moreover, the term can be used to denote inedible seeds such as berseem, cotton, etc.
On the other hand, harder seeds are called nawa. Linguistically, the word “nawa” can be masculine or feminine. It is mentioned only once in the Ever-Glorious Qur’an. Examples of crops with nawa include: dates, apricots, plums, peaches, olives, etc. Regardless of the nature of the seed coat, whether it is soft-delicate, thick-woody, or hard-leguminous, Allah (SWT) enables the embryo to split once it acquires the favorable conditions needed for its germination. This miraculous process, known as “Seed Germination” and used by most of the higher forms of plants for reproduction, facilitates the sprouting of the embryonic seed leaf from inside the seed itself.
Seed plants, from which human beings obtain most of their food and nutrition, include more than 250,000 genera of higher forms of plants of different categories. Each genus is represented by an average of at least ten species; each of such species is represented by infinite numbers of individual plants that reproduce through seed dispersal or implantation as much as Allah wills.
All crops which are used as main nutritional sources for man can be called ghalla (produce), a word never mentioned in the Qur’an. The term habb is mentioned in the Qur’an six times in five ayahs.
The Nature of Seeds

Seeds are the fertilized ovules of the higher-form plants. Thus, they serve as the reproductive organ for most of these plants. The seed contains an embryo which is temporarily dormant and occupies a very small area of the seed’s size leaving the remaining area for the stored inorganic food. This stored food is essential for the embryo’s germination in its early stages. The root grows downwards penetrating the soil in order to draw water and nutrients. On the other hand, the shoot grows upwards to absorb air and sunlight. Once the green leaves are brought forth, the plant starts the photosynthesis process that provides the food needed to enhance its growth and build up its cells, tissues, flowers, and fruits .
The seed, with its embryo and albumen, is covered by a number of coats to protect it against any external effect. One of the most important coats is the testa, which is formed from the integuments after the fertilization process. The exocarp is formed from the wall of the ovary immediately after fertilization. As the seed matures, it dries and the living embryo within it remains dormant until the surrounding conditions are suitable for germination. The period between the seed’s maturity and viability varies. Sometimes the seeds are viable once they are removed or sprout out of the fruit. If such seeds dry, the embryo may partly lose its vitality or it might die. In some other plants, such as the seeds of the legume family and the stones of many fruits like those of palm dates, the embryo remains vital within the grain or stones for many years. The number of the seeds’ coats, their shape and nature vary between plants. Moreover, there are variations in the shape and size of the embryo, as well as in the way the plants store the food that accompanies the embryo. The food is stored either in a special tissue called the endosperm or in one, two, or more cotyledons. This storage may be floury and amylaceous, hard and leguminous (as in the seed of corn) or cellulosic as in the stones of palm dates.
Splitting the Grain and Stones (Seed Germination)

The coats that protect the seed are often distinct. In some cases, when they fuse with the seed’s wall, these coats can’t be identified. Allah, the Great Creator, provides the embryo of the seed with a limited connection with the outside world through a very tiny circular scar known as the hilum. The hilum is the location that links the seed to the funnel. Under the hilum, there is a narrower opening known as the micropyle. These two openings are covered with a spongy tissue called the aril, which has the ability to absorb water. Moreover, they may take the form of two linear slits, known as the style and the cone. Through these two openings, oxygen, as well as most of the water absorbed by the seed during its germination, passes into the embryo.
The dormant embryo within the seed consists of three main parts:
(1) The plumule which will form the shoot system;
(2) The radicle which will form the root system;
(3) The hypocotyl which will form the stem.
The food, which surrounds the embryo, is stored either in a special tissue known as the endosperm, or in one cotyledon or more. Such food consists of different carbohydrates, proteins, and fats according to the plant type. Monocotyledonous plants with covered seeds include corn, whereas dicotyledonous plants include bean and polycotyledonous plants include conifer which belongs to Gymnospermae. The cotyledon or cotyledons may remain under the soil or spring up. They act as a primary leaves known as cotyledonous leaves.
The Requirements for Seed Germination

There are many internal and external requirements for the seed to grow and turn gradually to a seedling and then to a complete plant. This occurs after the period of dormancy the embryo undergoes within the dry seed. The internal requirements are related to the seed itself such as the vitality of the embryo, the maturity of the seed, and the absence of seed decay and rot. In order to become mature, the seed has to be void of growth inhibitors such as abscisic acid. This acid is formed within some seeds to keep the embryo dormant until the conditions become favorable and suitable for its germination. Many seeds start to grow only when growth inhibitors are eliminated through heat and light. Growth inhibitors can also be eliminated by anti-growth inhibitors released by the embryo itself within the seed. Glory be to Him Who predestined such processes through His Omniscience and Omnipotence .
The internal requirements also include the ability of the seed to absorb adequate amounts of water and oxygen. Allah, the Creator (SWT) has made tiny openings in the body of the seed for this purpose such as the hilum and the micropyle or the style and the cone. Some types of seeds are covered with a thick outer coat that may prevent the adequate amount of water and oxygen from reaching the embryo except after this coat is torn by going through a series of natural, chemical or microbial activities. It is difficult for such seeds to germinate unless their outer coats are scratched or the seeds themselves are washed and soaked in water for a certain period of time or subjected to light or low temperatures (about five degree Celsius for a period ranging between four to six weeks). Light and low temperatures activate the embryo within the seed and assist in its germination.
Concerning the external requirements, first and most important for germination is the availability of water with suitable specifications. There must also be an adequate amount of water because if water floods the seeds this could spoil them, as the oxygen will not reach the embryo within the seed. Moreover, there must be an adequate amount of oxygen as well as proper heat and lighting because some seeds become active in light, while others prefer darkness.
Changes that Occur to Seeds during Germination