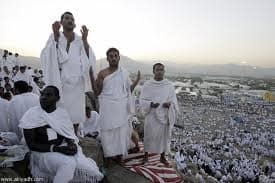 Hajj is one of the great pillars of Islam. Allah Almighty has made it obligatory on the Muslims who are able to find a way to do it, saying (what means): {And [due] to Allah from the people is a pilgrimage to the House—for whoever is able to find thereto a way. But whoever disbelieves—then indeed, Allah is free from need of the worlds.} [Quran 3: 97]

People have continued to perform the Hajj since Ibrahim (Abraham), may Allah exalt his mention, raised the foundations of the House and called on people to come to it, as Allah ordered him until our present time, and it will not stop as long as there are believers on earth. When Allah Almighty will seize the souls of the believers to leave only the evil persons, who will witness the final Hour, the delegations of Hajj to the Sacred House will stop, as will be explained later.

The virtues of Hajj are many and variable:

1- Hajj is one of the best righteous deeds and acts of obedience: Abu Hurayrah, may Allah be pleased with him, narrated that the Prophet

was asked: “What is the best deed?” He replied: “To have faith in Allah and His Messenger.” The enquirer asked: “What next?” The Prophet

said: “To perform jihad for the sake of Allah.” The enquirer asked: “What next?” The Prophet

2- Hajj equals (in reward) observing jihad for the sake of Allah. It is also the alternative for those who are unable to observe jihad or those who are not obliged to observe it in the sharia: ‘Aa’ishah, may Allah be pleased with her, narrated that she said: “O Messenger of Allah! We see that jihad is the best deed. Should we (women) not actively participate in it?” The Prophet

replied, ‘No, the best jihad for you is a valid and accepted Hajj.'” [Al-Bukhari]

According to the wording of another narration, she said: “Should we (women) not actively participate in fighting and jihad along with you?” The Prophet

replied: “For you, the best and most beautiful jihad is a valid and accepted Hajj.” Thereupon, ‘Aa’ishah, may Allah be pleased with her, commented: “I will never abandon Hajj after hearing these words from the Prophet

According to the wording of a third narration, she said: “Should we (women) not set out and observe jihad along with you? I do not see any other action better than jihad in the Quran.” The Prophet

replied: “For you, the best and most beautiful jihad is observing Hajj to the House (of Allah), a valid and accepted Hajj.” [ An-Nasaa’i]

3- Entering Paradise is the reward of the valid and accepted Hajj. Abu Hurayrah, may Allah be pleased with him, narrated that the Prophet

said: “An ‘Umrah to another ‘Umrah will be redemption of sins for whatever occurs between them, and (entering) Paradise is the reward of a valid and accepted Hajj.” [Al-Bukhari and Muslim]

4- A valid and accepted Hajj purifies from sins. Abu Hurayrah, may Allah be pleased with him, narrated that he heard the Prophet

say: “Whoever performs a Hajj during which he neither commits sexual intercourse nor sins will return as sinless as a newborn child on the very day his mother delivered him.” [Al-Bukhari]

According to another narration, the Prophet

said: “Whoever comes to this House and neither commits sexual intercourse or sins will return as sinless as a newborn child on the very day his mother delivered him.”[Muslim]

According to a third narration, the Prophet

said: “Whoever performs a Hajj during which he neither commits sexual intercourse nor sins, his past sins will be forgiven.” [At-Tirmithi]

5- Performing Hajj often wipes out poverty. Ibn Mas‘ood and Ibn ‘Umar, may Allah be pleased with them, narrated that the Prophet, sallallaahu ‘layhi wa sallam, said: “Perform Hajj and ‘Umrah successively for they remove poverty and sins just as fire removes the impurities of iron.” [At-Tirmithi and Ibn Majah]

6- Those performing the Hajj are the guests of Allah, and He pledged to generously host and honor them. ‘Umar, may Allah be pleased with him, narrated that the Prophet

said: “The fighter for the sake of Allah and the one observing the Hajj and ‘Umrah are the guests of Allah; He invited them and they responded, and when they ask Him, He gives them.” [Ibn Majah]

According to the wording of another narration, the Prophet

said: “The pilgrims of the Hajj and ‘Umrah are the guests of Allah; and when they supplicate Him, He answers their supplication; and when they ask for His forgiveness, He forgives them.” [Ibn Majah]

The obligation of the Hajj will continue even after the occurrence of the great trials at the end of time. In a hadith, the Prophet

said: “Hajj and ‘Umrah to this House will continue even after the emergence of Ya’jooj and Ma’jooj (Gog and Magog).” [Al-Albani: authentic]
When Allah will seize the souls of the believers at the end of time to leave only the evil people to witness the Hour, Hajj will stop. The Prophet

said: “The (final) Hour will not come unless people refrain from performing the Hajj.” [Al-Albani: authentic]

Thus, it is obligatory on each Muslim who is physically and financially able to hasten to perform the Hajj before he will be unable to do so. The Prophet

said: “Whoever intends to perform the Hajj should hasten to it; for one could get sick, his mount could be lost, or he could face poverty and need.” [Saheeh Al-Jaami’]

Glad tidings for those who are unable to perform the Hajj:

There is a reward equal to the reward of Hajj. It was narrated on the authority of Anas, may Allah be pleased with him, that the Prophet

The benefits intended from Hajj:

Firstly: Teaching the Muslim to honor the symbols of Allah: Allah Almighty says (what means):
• {Indeed, the first House [of worship] established for mankind was that at Mecca—blessed and a guidance for the worlds. In it are clear signs [such as] the standing place of Ibrahim. And whoever enters it shall be safe. And [due] to Allah from the people is a pilgrimage to the House—for whoever is able to find thereto a way.} [Quran 3: 96-97]
• {That [is so]. And whoever honors the Symbols of Allah—indeed, it is from the piety of hearts.} [Quran 22: 32]

Secondly: Achieving compassion and love among the Muslims. Despite the differences in language, color, and nationality, all Muslims gather in one place, supplicate only one God, and circumambulate only one House. This contributes to uniting their goals and purposes, and then the Muslims become like one person. The Prophet

said: “The believers in their mutual kindness, compassion and sympathy are just like one body. When one of the organs suffers, the whole body responds to it with wakefulness and fever.” [Muslim]

also said: “The Muslims; [the value of] their blood is equal, and the protection offered by the humblest of them is entitled to be respected by all of them, and they are all united against others.” [Ibn Majah]

The hajj reflects the aspects of the Muslims’ strength and unity and unveils their sharia. Allah Almighty says (what means): {And [mention] when We made the House a place of return for the people and [a place of] security.}[Quran 2: 125]

Third: Following the example of Ibrahim and his son, Ismaa‘eel (Ishmael), may Allah exalt their mention, as well as the practice of Prophet Muhammad

and recalling these memories and actions. Allah Almighty says (what means): {And [mention] when Ibrahim was raising the foundations of the House and [with him] Ismaa‘eel, [saying], “Our Lord, accept [this] from us. Indeed You are the Hearing, the Knowing. Our Lord, and make us Muslims [in submission] to You and from our descendants a Muslim nation [in submission] to You. And show us our rites and accept our repentance. Indeed, You are the accepting of repentance, the Merciful. Our Lord, and send among them a messenger from themselves who will recite to them Your verses and teach them the Book and wisdom and purify them. Indeed, You are the Exalted in Might, the Wise.”} [Quran 2: 127-129]

During the course of Hajjat Al-Wadaa‘ (the Farewell Hajj), the Prophet

said to the people: “Station where you are performing your rituals for you are heirs to the heritage of your forefather Ibrahim.” [Abu Daawood]

also said: “Learn your rituals (of Hajj) from me, for I may not meet you again in this place after this year.” [Muslim]

People of the pre-Islamic era used to repeat the talbiyah ,but they added polytheistic statements, saying: “There is no other partner with You except one associate; he is Yours; You Own him and whatever he owns.”

Throughout all the rituals and actions of the Hajj, one confirms the oneness of Allah and performs them with the sole intention of obeying Allah and of following the example of the Prophet

. He walks and stops according to the command of Allah, shaves his hair, and slaughters his hady (sacrificial animal for the Hajj) where Allah commands him. In doing so, he follows the example of the Prophet

O Allah, provide for us so we can perform Hajj to Your House and grant us success to do what You love and what brings Your satisfaction. The end of our supplication is to praise Allah, the Lord of the worlds.