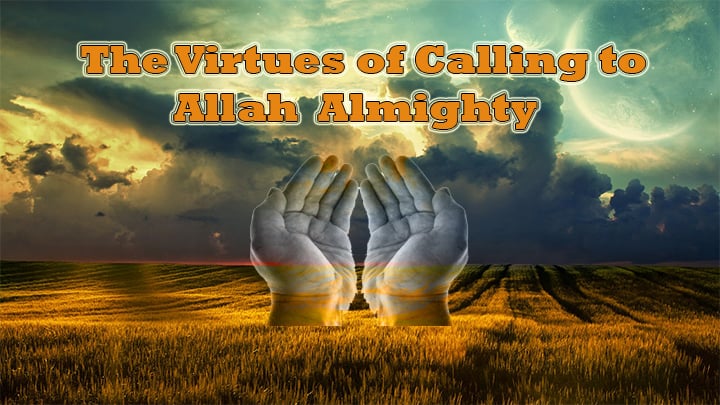 Calling to Allah Almighty is among the best kinds of worship and the loftiest good works. Allah Almighty has commanded His slaves to carry out this blessed duty, as He, Glory be to Him, says:

‘Translation’ {Let there arise out of you a group of people inviting to all that is good (Islâm), enjoining Al-Ma‘rûf (i.e. Islâmic Monotheism and all that Islâm orders one to do) and forbidding Al-Munkar (polytheism and disbelief and all that Islâm has forbidden). And it is they who are the successful.} [Surat A’li `mran:104].

Some virtues of this blessed duty and its effects were elucidated through the following points:

1- Da`wah is an inheritance of the Prophet Muhammad, may the peace and blessings of Allah be upon him, as Allah, Glory be to Him, says:

‘Translation’ {O Messenger (Muhammad)! Proclaim (the Message) which has been sent down to you from your Lord.} [Surat Al Ma’idah:67].

2- Allah Almighty has praised the preachers and workers in the field of Da`wah , as He, Glory be to Him, said:

‘Translation’ {And who is better in speech than he who [says: “My Lord is Allâh” and then stands firm, and invites to Allâh, and does righteous deeds, and says: “I am one of the Muslims.” [Surat Fussilat:33].

3- Blessed appreciation and great reward by Allah Almighty for the caller to Allah, as was promised in an authentic Hadith of the Prophet Muhammad, may the peace and the blessings of Allah be upon him, who said to His Holiness `Ali, may Allah be pleased with him, on the day of Khyber: «Proceed to them steadily till you approach near to them and then invite them to Islam and inform them of their duties towards Allah which Islam prescribes for them, for by Allah, if one man is guided on the right path (i.e. converted to Islam) through you, it would be better for you than (a great number of) red camels.» (1).

4- Preacher gets the honor of being with the Prophet Muhammad, may the peace and the blessings of Allah be upon him, for his performance of Da`wah mission, as Allah, Glory be to Him, says:

‘Translation’ {Say (O Muhammad): “This is my way; I invite unto Allâh (i.e. to the Oneness of Allâh) with sure knowledge, I and whosoever follows me (also must invite others to Allâh with sure knowledge). And Glorified and Exalted be Allâh. And I am not of the idolaters.”} [Surat Yusuf:108].

5- Through Da`wah activities reformations are carried out on the earth and virtue is established and evil is conquered. Furthermore, through Da`wah the doctrine and behavior of the people are corrected and refreshed, as Allah, Glory be to Him, says about His Prophet Sho`aib, peace be upon him,:

‘Translation’ {I only desire reform to the best of my power. And my guidance cannot come except from Allâh, in Him I trust and unto Him I repent.” [Surat Hud:88].

6- The reward of Da`wah is continuous and everlasting, and it has been regarded among the greatest ongoing charity, as was promised in an authentic Hadith that says: «If anyone calls others to follow right guidance, his reward will be equivalent to those who follow him (in righteousness) without their reward being diminished in any respect.» (2).

May the peace and the blessings of Allah be upon our Prophet Muhammad, his family members and his all companions.