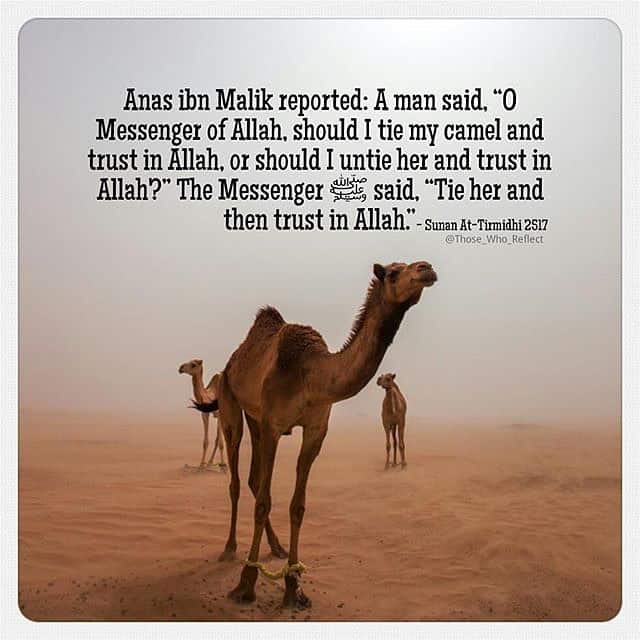 Anas ibn Malik, may Allah be pleased with him, narrated: “A man said: O Messenger of Allah, Shall I tether it and trust in Allah or untie it and place trust in Allah? He, the Prophet, said: «Tie it and put your trust in Allah»” Abu `Eisa At-Tirmidhy said: This Hadith is Gharib (a Hadith with a single narrator usually at the beginning of the chain of narration) from the Hadith of Anas and we do not know it except from this way. It was reported from `Amr ibn Umayyah Ad-Damary from the Prophet, peace be upon him, a similar narration (1).

(tether it) to tie an animal to a post so that it can only move around within a limited area.

(and put your trust) i.e., put your trust in Allah because tethering it does not contradict relying on Allah and overlooking the means of protection.

Lessons gained from the Hadith:

1- The permissibility of adopting the proper means to reach an end along with relying on Allah, may He be Exalted, and knowing that combining the two is the real meaning of reliance on Allah.

2- The reality of reliance on Allah is entrusting all matters to Him, may He be Exalted, alone which is obligatory, but it is rather one of the fundamentals of faith because of Allah’s Saying:

‘Translation’ {And put your trust in Allâh if you are believers indeed} [Al Ma’idah:23].

Reliance is one of the strong moral means that achieve one’s goal and fulfill the needs. However, a believer should follow the proper means whether these means are acts of worship such as invocation, Salah, charity, and maintaining the ties of kinship or physical such as eating, drinking, using permissible medication, and taking shield against hot and cold and suchlike, and following the example of the Messenger of Allah, peace be upon him, for he is the best one who put his trust in Allah. The Prophet, peace be upon him, used to follow the proper means along with full reliance on Allah, may He be Exalted. So, whoever abandons other causes in spite of their presence and depends only on reliance shall disagree the Sunnah of the Messenger of Allah, peace be upon him, and his reliance is called “disability not confidence.” (3)