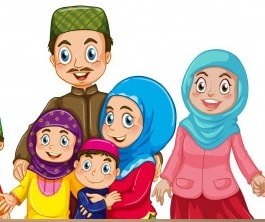 It is a question that poses itself in order to restore rights to their owners in many families and to make the man realize his real position in the home and how he could lead it to safety.

Today, the woman is in charge in many Muslim houses. As a result, concepts are mixed up, scales are unbalanced and values have disappeared. How dangerous it is when the woman is in charge of the man and his children! Hence, the family has disintegrated and disunited in the presence of a husband without authority, a wife with a free hand who is driven by curiosity and whim, and children lost between quarreling parents.

Unity of leadership is vital to the safety of any boat, and the boat that represents the home requires a leader to bear responsibility and maintain the stability of the entire family system. This is the normal state of affairs which is in harmony with the rules of the Shari‘ah with regards to men.

Which of the spouses should logically assume leadership? Should it be the woman who has a flaming temper and emotions, which are naturally required by her main role in taking care of the children and adorning and perfuming the house with beauty? Or is it to be the man whom Islam obliged to provide for them, so that the woman may dedicate herself to her grand task and exert effort in it as much as she can?

Islam assigned the man to be in charge of the wife in order to achieve its normative system as every activity should involve a leader and authority, and it chose the man for this task because he is physically and mentally most fit to bear it.

Regretfully, many men have willingly renounced their right to be in charge of their home out of ignorance of Islamic teachings. This has created great problems which have threatened the very stability of the home. People may think that if the man renounces his right to be in charge of the wife, this would make her happy. This is a huge mistake. The woman by her nature loves to take recourse in a strong support, and even when a woman proudly tells her friends that her husband obeys her and does not disobey any of her orders, thereby showing the weakness of the husband’s authority, she believes in her heart that there is a fault and weakness in the structure of the family.

Conversely, the woman who openly complains about the strong personality and full authority of her husband finds comfort and happiness which suit her nature. Here is an example showing the truth in this issue: When security is disturbed in a land, the people of that land can do whatever they like, but they will not find psychological stability and will tremble with fear and anxiety. However, if this land and its affairs are perfectly controlled by tough men, though some people may feel uneasy about that, they will all find inner stability, security and peace of mind.

Thus, if the man renounces his right to be in charge of the woman and this distresses her, it will not make her happy and it weakens the structure of the family and destroys its foundations. The Prophet, sallallahu ‘alayhi wa sallam, said: “A people who entrust their affairs to a woman will never succeed.” [Al-Bukhari] This is a general instruction even in the affairs of the home. I believe that the woman should demand that her husband takes charge of the family just as she demands that he financially supports it in order to maintain the stability of the marital life.

To that aim, I introduce this essay, in a series of articles which guides us to the knowledge of the source of danger and disease, and their ill effects. Then, we will elaborate on the true meaning of the man being in charge of the woman and how it works in the home.