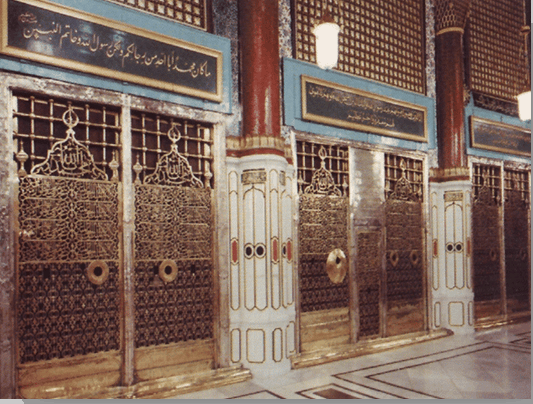 And We have sent you (O Muhammad) not but as a mercy for the worlds. (Quran 21:107)
Praise be to Allah who guided us to this and if it was not for Him we wouldn’t have been guided “They said: Glory to thee: of knowledge We have none, save what it is thou who art perfect in knowledge and wisdom”, prayer and peace be upon His Messenger the illiterate Prophet who was sent as a mercy to the worlds, his family members and companions. I invoke upon Allah for His close assistance to enable me put together this article.
Was he really a mercy to the worlds? This is what we are going to discuss in the next few pages Insh a Allah.
For this purpose we intend to examine two particular situations taking a comparative approach. The former occurred when he suffered a weak position and the latter during his victory in an effort to detect if his characteristics changed at all. The two situations are the trip to At-Ta’if and his marriage to Juwayriyya bint al-Harith.

Prophet Mohammad blessing and peace be upon him experienced much agony and hardships throughout his life, starting from being raised as an orphan, to living with his grandfather, loosing him, and moving with his uncle Abu Taleb. This uncle, in particular, was a major support to him during his Dawa till his death although he did not embrace Islam. His life was hard and difficult, nevertheless he was granted a merciful character and exalted mannerism as described by Allah:
“And verily, you (O Muhammad) are on an exalted standard of character.” (Quran 68:4)

Needless to mention that the Ayah bears deeper sense than Mohammad blessing and peace be upon him being a mercy or adopting a merciful behaviour to all creations. Certainly Allah Intended to explain how by sending the final Messenger, Allah Willed mercy to the worlds for betterunderstanding, Allah Used the worlds to indicate that each and every creation will be eligible, beneficiary and recipient to this mercy in a way or another
The first situation-as we are going to learn in the following lines-ended a series of sorrowful incidents starting with the death of Abu Talib to Khadijah’s death who was no less of a supporter. Those consecutive sad events made him call that year, the year of grief.

After he was worn out calling people to Islam in Makkah with no concrete results, he thought to extend beyond the local boundaries in search for hope.
The Trip to At-Ta’if
In Shawwal [Tareekh-e-Islam 1/122] (in the last of May or in the beginning of June 619 A.D.), ten years after receiving his mission from his Lord, the Prophet [pbuh] setout towards At-Ta’if, about 60 kilometres from Makkah, in the company of his freed slave Zaid bin Haritha inviting people to Islam. But contrary to his expectations, the general atmosphere was terribly hostile. He approached the family of ‘Umair, who were reckoned amongst the nobility of the town. But, to his disappointment, all of them turned deaf ear to his message and used abusive language as regards the noble cause he had been striving for.
Three brothers from the chieftains of Thaqeef —‘Abd Yaleel, Mas‘ud and Habeeb — sons of ‘Amr bin ‘Umair Ath-Thaqafy met the Prophet [pbuh], who invited them to embrace Islam and worship Allâh, but they impudently jeered at him and refused his invitation. “He is tearing the cloths of Al-Ka‘bah; is it true that Allâh has sent you as a Messenger?” said one of them. “Has not Allâh found someone else to entrust him with His Message?” said the second. “I swear by Allâh that I will never have any contact with you. If you are really the Messenger of Allâh, then you are too serious to retort back; and if you are belying Allâh, then I feel it is imperative not to speak to.” said the third.

The Messenger of Allâh [pbuh], finding that they were hopeless cases, stood up and left them saying: “Should you indulge in these practices of yours, never divulge them to me.” For ten days he stayed there delivering his message to several people, one after another, but all to no purpose.
Stirred up to hasten the departure of the unwelcome visitor, the people hooted him through the alley-ways, pelted him with stones and obliged him to flee from the city pursued by a relentless rabble. Blood flowed down both his legs; and Zaid, endeavouring to shield him, was wounded in the head.
The mob did not desist until they had chased him two or three miles across the sandy plains to the foot of the surrounding hills. There, wearied and exhausted, he took refuge in one of the numerous orchards, and rested against the wall of a vineyard.
At a time when the whole world seemed to have turned against him, Muhammad [pbuh] turned to his Lord and betook himself to prayer and the following touching words are still preserved as those through which his oppressed soul gave vent to its distress. He was weary and wounded but confident of the help of his Lord: “O Allâh! To You alone I make complaint of my helplessness, the paucity of my resources and my insignificance before mankind. You are the most Merciful of the mercifuls. You are the Lord of the helpless and the weak, O weak, O Lord of mine! Into whose hands would You abandon me: into the hands of an unsympathetic distant relative who would sullenly frown at me, or to the enemy who has been given control over my affairs? But if Your wrath does not fall on me, there is nothing for me to worry about.”
“I seek protection in the light of Your Countenance, which illuminates the heavens and dispels darkness, and which controls all affairs in this world as well as in the Hereafter. May it never be that I should incur Your wrath, or that You should be wrathful to me. And there is no power nor resource, but Yours alone.”

Seeing him in this helpless situation, Rabi‘a’s two sons, wealthy Makkans, were moved on grounds of kinship and compassion, and sent to him one of their Christian servants with a tray of grapes. The Prophet [pbuh] accepted the fruit with pious invocation: “In the Name of the Allâh.” The Christian servant ‘Addas was greatly impressed by these words and said: “These are words which people in this land do not generally use.” The Prophet [pbuh] inquired of him whence he came and what religion he professed. ‘Addas replied: “I am a Christian by faith and come from Nineveh.” The Prophet [pbuh] then said: “You belong to the city of the righteous Jonah, son of Matta.” ‘Addas asked him anxiously if he knew anything about Jonah. The Prophet [pbuh] significantly remarked: “He is my brother. He was a Prophet and so am I.” Thereupon ‘Addas paid homage to Muhammad [pbuh] and kissed his hands. His masters admonished him at this act but he replied: “None on the earth is better than he is. He has revealed to me a truth which only a Prophet can do.” They again reprimanded him and said: “We forewarn you against the consequences of abandoning the faith of your forefathers. The religion which you profess is far better than the one you feel inclined to.”
Heart-broken and depressed, Muhammad [pbuh] set out on the way back to Makkah. When he reached Qarn Al-Manazil, Allâh, the Almighty sent him Gabriel together with the angel of mountains. The latter asked the Prophet [pbuh] for permission to bury Makkah between Al–Akhshabain —Abu Qubais and Qu‘ayqa‘an mountains. Full narration of this event was given by ‘Aishah [R] (the Prophet’s spouse). She said: “I asked the Prophet [pbuh] if he had ever experienced a worse day than Uhud. He answered that he had suffered a lot from those people (the idolaters) but the most painful was on the day of ‘Aqabah. I went seeking support from Ibn ‘Abd Yalil bin ‘Abd Kalal, but he spurned me. I set out wearied and grieved heedless of anything around me until I suddenly realized I was in Qarn Ath- Tha‘alib, called Qarn Al-Manazil. There, I looked up and saw a cloud casting its shade on me, and Gabriel addressing me: Allâh has heard your people’s words and sent you the angel of mountains to your aid. The latter called and gave me his greetings and asked for my permission to bury Makkah between Al-Akhshabain, the two mountains flanking Makkah. I said in reply that I would rather have someone from their loins who will worship Allâh, the All–Mighty with no associate.” A concise meaningful answer fully indicative of the Prophet’s matchless character and the fathomless magnanimous manners. [Bukhari 1/458; Muslim 2/109][1]
We will move now to the second situation subject to study in this paper:
Marriage to Juwayriyya bint al-Harith:
Juwayriyya bint al-Harith (Arabic: جويرية بنت الحارث juwayriyya bint al-ḥārith, born c. 608) was married to Muhammad, the Islamic prophet when he was 58 years old and she was 20, thus placing the marriage in 628. She therefore is also called Mother of the Believers (Arabic: “Umm-al-Momineen”)
She was the daughter of al-Hārith ibn Abi Dirar, the chief of Banu Mustaliq, who was defeated with his tribe in a battle after a surprise attack. She was one of the captives taken in this campaign. She initially fell among the booty of Muhammad’s, blessing and peace be upon him, companion Thabit b. Qays b. Al-Shammas may Allah be pleased with him. Troubled by this, Juwayriya sought a deed of redemption from Muhammad blessing and peace be upon him. Muhammad proposed to marry her and as a result freed her from the bondage of Thabit and consequently ameliorated the condition of her captured tribe.[2]
Studying and analyzing the two incidents, it becomes clear that his character did not change when he was in a weak or a strong position. When he was defeated, distressed, and longing to see a glimpse of hope among people he called to Allah, but in return he endured aggression and physical hostility, still he did not take advantage of Allah’s offer to eliminate those people. Instead, he continued hoping for even one who would embrace the Oneness of Allah.

As for marrying Juwayriyya, the incident usually raises controversy. Based on this incident, people who are short sighted perceive him as desirous to possess women. But in a fraction of a second, we can easily detect how the same merciful, respectful and caring character manifested when he was the victorious chief. Caring for human beings, trying to help them to be set free from the shackles of polytheism, self, desires only to mention a few, instead of celebrating this victory, enjoy humiliating the enemy, and outwardly express having the upper hand, he responds to the request of a woman who once occupied a high rank among her family. Through his insight, he realized that by marrying Juwayriya, the companions would be uncomfortable keeping the Messenger’s-blessing and peace be upon him-in laws as war captives. Instead of calling them to give up their booty, he married Juwayria knowing that the companions would automatically free her tribe. Because of this marriage, 100 households of Banu Mustaliq were set free. Certainly, he is aware of the human nature, including the love of money, property and knew how to handle it. Further, he did not force her family members to embrace Islam, however, his and the companion’s attitude following his footsteps showed the beauty of Islam, mercy of its Messenger and willingly embraced Islam.
Isn’t this enough of a proof that he was really a mercy to the worlds?
Alhamdulelah Who Has Guided us to this and blessing and peace be upon his final Messenger Mohammad Ibn Abdullah, his household and companions.