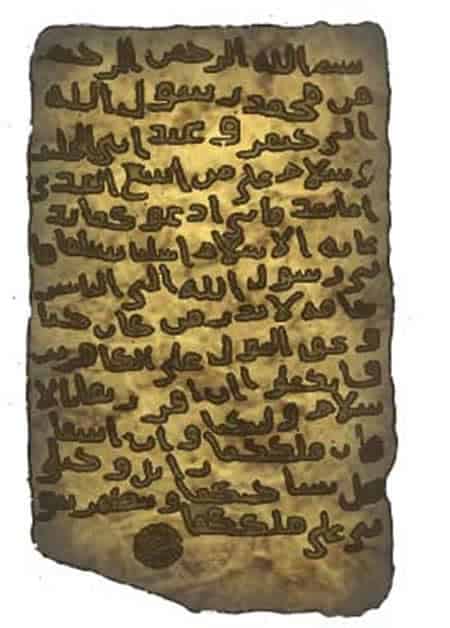 “In the Name of Allâh, the Most Beneficent, the Most Merciful.
From Muhammad bin ‘Abdullah to Jaifer and ‘Abd Al-Jalandi.
Peace be upon him who follows true guidance; thereafter I invite both of you to the Call of Islam.
Embrace Islam. Allâh has sent me as a Prophet to all His creatures in order that I may instil fear of Allâh in the hearts of His disobedient creatures so that there may be left no excuse for those who  deny Allâh. If you two accept Islam, you will remain in command of your country; but if you refuse  my Call, you’ve got to remember that all your possessions are perishable. My horsemen will  appropriate your land, and my Prophethood will assume preponderance over your kingship.”
‘Amr bin Al-’As, who was chosen to carry the letter, narrated the following story that happened before he was admitted into the audience of Jaifer. “When I arrived in ‘Oman I contacted ‘Abd, who was known to be more mild-tempered than his brother:
‘Amr: I am the messenger of Allâh’s Prophet coming to see both, you and your brother.
‘Abd: You have to see my brother and read to him the letter you are carrying. He is my senior in both age and kingship. Incidentally, what is the purport of your mission?
‘Amr: The Prophet calls upon you to believe in Allâh Alone with no associate, discard any other deities and testify to the slavehood and Messengership of Muhammad.
‘Abd: O ‘Amr! You come from a noble family, but first of all, tell me what was your father’s attitude concerning this Faith? You know, we used to follow his steps.
‘Amr: Death overtook him before believing in Muhammad’s mission; I wish now he had embraced Islam and been truthful to it before his death. I myself had adopted the same attitude until Allâh guided me towards Islam.
‘Abd: When did you embrace Islam?
‘Amr: When I was at Negus’s court. By the way, the latter did also enter into the fold of Islam.
‘Abd: What was his people’s reaction?
‘Amr: They approved of him and followed his steps.
‘Abd: The bishops and monks?
‘Amr: They did the same.
‘Abd: Beware ‘Amr of lying for this soon betrays man.
‘Amr: I never tell lies; moreover, our religion never allows it.
‘Abd: Has Hercules been informed of the Islamization of Negus?
‘Amr: Yes, of course.
‘Abd: How did you happen to know that?
‘Amr: Negus used to pay land tax to Hercules, but when the former embraced Islam, he swore he would discontinue that tax. When this news reached Hercules, his courtiers urged him to take action against Negus but he refused and added that he himself would do the same if he were not sparing of his kingship.
‘Abd: What does your Prophet exhort you to do?
‘Amr: He exhorts us to obey Allâh, the All-Mighty, the All-Glorious, be pious and maintain good ties with family kin; he forbids disobedience, aggression, adultery, wine, idolatry and devotion to the cross.
‘Abd: Fair words and fair beliefs are those you are calling for. I wish my brother would follow me to believe in Muhammad (s.a.a.w.) and profess his religion, but my brother is too sparing of his kingship to become a subordinate.
‘Amr: Should your brother surrender himself to Islam, the Prophet would give him authority over his people and take alms tax from the wealthy people to be given to the needy.
‘Abd: That is fair behaviour. But what is this alms tax you have mentioned?
‘Amr: It is a Divine injunction that alms tax be taken from the well-to-do people who have surplus wealth and be distributed to the poor.
‘Abd: I doubt if this can work among our people.
‘Amr stayed for some days to be admitted into Jaifer’s court until he was finally granted this permit. “He asked me to hand him the letter to read it. After that he asked me how Quraish reacted and I answered that they had followed him, some out of their own freewill and others overpowered by military fighting. Now, people have chosen Islam in preference to other creeds, and have realized through their mental insight that they had been straying in darkness. None, except you, is now out of the domain of Islam, so I advise you to embrace Islam so that you can provide security to yourself and your country.”
Here, he asked me to call on him the following day. The following day he showed some reluctance in receiving me but his brother, ‘Abd, interceded and I was given the chance to see him again but this time to address me in a threatening arrogant tone. However, after a private talk with his brother and reconsidering the whole situation, both brothers embraced Islam and proved to be true to Islam that had begun to make its way into this new area. The context of this story reveals that this letter was sent at a much later date than the others, most likely after the conquest of Makkah.
Through these letters, the Prophet managed to communicate his Message to most monarchs at that time; some believed, while others remained obdurate and persisted in their disbelief. However, the idea of embracing Islam, and the advent of a new Prophet preoccupied all of them.
source: muhammad.net