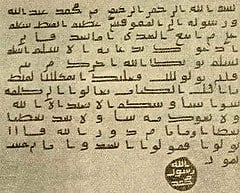 The Prophet (s.a.a.w.) wrote to Juraij bin Matta, called Muqawqas, vicegerent of Egypt and Alexandria saying:
“In the Name of Allâh, the Most Beneficent, the Most Merciful.
From Muhammad servant of Allâh and His Messenger to Muqawqas, vicegerent of Egypt.
Peace be upon him who follows true guidance. Thereafter, I invite you to accept Islam. Therefore, if you want security, accept Islam. If you accept Islam, Allâh, the Sublime, shall reward you doubly. But if you refuse to do so, you will bear the burden of the transgression of all the Copts.

“Say [O Muhammad (Peace be upon him)]: ‘O people of the Scripture (Jews and Christians), come to a word that is just between us and you, that we worship none but Allâh, and that we associate no partners with Him, and that none of us shall take others as lords besides Allâh.’ Then, if they turn away, say: ‘Bear witness that we are Muslims.’ ” [3:64]
Hatib bin Abi Balta‘a, who was chosen to communicate the message, requested an audience with Muqawqas before imparting the contents of the letter. He addressed Egypt’s vicegerent saying:
“There used to be someone before you who had arrogated the status of the Supreme Lord, so Allâh punished him and made an example of him in the Hereafter, and in this life; therefore, take warning and never set a bad example to others.” Muqawqas answered: “We are in no position to relinquish our religion except for a better one.”

Hatib resumed: “We invite you to embrace Islam, which will suffice you all what you may lose. Our Prophet has called people to profess this Faith, Quraish and the Jews stood against him as bitter enemies, whereas Christians stood closest to his Call. Upon my life, Moses’s news about Christ is identical to the latter’s good tidings about the advent of Muhammad; likewise, this invitation of ours to you to embrace Islam is similar to your invitation to the people of Torah to accept the New Testament. Once a Prophet rises in a nation, he is eligible for positive response, hence you are subject to the same Divine Law. Bear in mind that we have not come to dissuade you from religion of Christ but rather bidding you to adhere to its tenets.”

Muqawqas meditated over the contents of the letter deeply and said: “I have come to the conviction that this Prophet bids nothing abominable; he is neither a straying magician nor a lying soothsayer. He bears the true manifest seeds of Prophethood, and so I will consider the affair deeply.” He took the parchment and ordered that it be kept in an ivory casket. He called a scribe to write the following reply in Arabic:
“In the Name of Allâh, the Most Beneficent, the Most Merciful.
From Muqawqas to Muhammad bin ‘Abdullah:
Peace be upon you. I have read your letter and understood its contents, and what you are calling for. I already know that the coming of a Prophet is still due, but I used to believe he would be born in Syria. I am sending you as presents two maids, who come from noble Coptic families; clothing and a steed for riding on. Peace be upon you.”
It is noteworthy that Muqawqas did not avail himself of this priceless opportunity and he did not embrace Islam. (Reference: Ar-Raheeq Al-Makhtum).