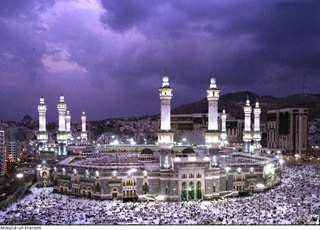 What Did His Followers Say? “His name was Muhammad” (peace and blessings be upon him)

To begin: You may be a Christian Protestant, Catholic, Jew, an atheist or an agnostic; or you may belong to any of many different religious denominations existing in today’s world. You might even be a communist or believe in man’s democracy as the rule on earth. Whoever you are and whatever ideological or political beliefs, social habits you may hold, there is no doubt – you should understand what others have to say about this man.

The world has had its share of great personalities. But these were one sided figures who distinguished themselves in but one or two fields, such as religious thought or military leadership. The lives and teachings of these great personalities of the earth are shrouded in the mist of time. There is so much speculation about the time and place their birth, the mode and style of their life, the nature and detail of their teachings and the degree and measure of their success or failure that is impossible for humanity to reconstruct, accurately the lives and teachings of these men and women.

But this is not the case of this man, Muhammad, peace and blessings be upon him, who accomplished so much in such diverse fields of human thought and behavior in the fullest blaze of human history. Every detail of his private life and public utterances has been accurately documented and faithfully preserved up until our day. The authenticity of the records so preserved is vouched for not only by the faithful followers but even by his prejudiced critics.

Muhammad, peace and blessings be upon him, was a religious teacher, a social reformer, a moral guide, an administrative colossus, a faithful friend, a wonderful companion, a devoted husband, a loving father – all in one. No other man in history ever excelled or equaled him in any of these different aspects of life – but it was only for the selfless personality of Muhammad, peace and blessings be upon him, to achieve such incredible perfection.

He was by far, the most remarkable man that ever set foot on this earth. He preached a religion, founded a state, built a nation, laid down a moral code, initiated numerous social and political reforms, established a powerful and dynamic society to practice and represent his teachings and completely revolutionized the worlds of human thought and behavior for all times to come.

Muhammad, peace and blessings be upon him, was born in what was then known as Felix Arabia, fourteen hundred years ago. He started his mission of preaching a religion of monotheism; a Way of Life based on the surrender, submission and obedience to the Commandments of Almighty God, in sincerity and peace.

The word “Islam” in Arabic means “the submission to God, in peace.”

Muhammad’s (peace and blessings be upon him) mission began at the age of forty and departed from this world at the age of sixty-three. During this short period of 23 years of his prophethood, he changed the complete Arabian Peninsula from paganism and idolatry to worship of One God, from tribal quarrels and wars to national solidarity and cohesion, from drunkenness and debauchery to sobriety and piety, from lawlessness and anarchy to disciplined living, from utter bankruptcy to the highest standards of moral excellence.

Human history has never known such a complete transformation of a people or a place before or since – and IMAGINE all these unbelievable wonders in JUST OVER TWO DECADES.

Muhammad, peace and blessings be upon him, was nothing more or less than a human being. but he was a man with a noble mission, which was to unite humanity on the worship of ONE and ONLY ONE GOD and to teach them the way to honest and upright living, based on the commands of God. He always described himself as, ‘A Servant and Messenger of God’ and so indeed every action of his proclaimed to be.

Today after a lapse of fourteen centuries, the life and teachings of Muhammad, peace and blessings be upon him, have survived without the slightest loss, alteration or interpolation. They offer the same undying hope for treating mankind’s many ills, which they did when he was alive. This is not a claim of Mohammed’s(peace and blessings be upon him) followers, but the inescapable conclusion forced upon by a critical and unbiased history.

The least YOU can do as a thinking and concerned human being is to stop for a moment and ask your self: Could these statements sounding so extraordinary and revolutionary really be true? And supposing they really are true and you did not know this man Muhammad, peace and blessings be upon him, or hear about him, isn’t it time you responded to this tremendous challenge and put in some effort to know him?

It will cost you nothing, but it may prove to be the beginning of a completely new era in your life.

We invite you to make a discovery of this wonderful man, Muhammad, peace and blessings be upon him, the like of whom never walked on the face of this earth.

What Do Others Say About Him?

His complete biography has been authenticated and circulated amongst scholars around the world starting while he was still alive and continuing up until today. One of the first examples we quote from is from the Encyclopedia Britannica, as it confirms:
(Regarding Muhammad) “… a mass of detail in the early sources shows that he was an honest and upright man who had gained the respect and loyalty of others who were likewise honest and upright men.” [Vol. 12]

Another impressive tribute to Muhammad, peace and blessings be upon him is in the very well written work of Michael H. Hart, “The 100: A Ranking of the Most Influential Persons in History.” He states that the most influential person in all history was Muhammad, peace and blessings be upon him, with Jesus second. Examine his actual words:
“My choice of Muhammad to lead the list of the world’s most influential persons may surprise some readers and may be questioned by others, but he was the only man in history who was supremely successful on both the religious and secular level.”

According to the Quran, Prophet Muhammad was the most excellent example for all of humanity. Even non-Muslim historians recognize him to be one of the most successful personalities in history. Read what the Reverend R. Bosworth-Smith wrote in “Mohammed & Mohammedanism” in 1946:
“Head of the state as well as the Church, he was Caesar and Pope in one; but, he was pope without the pope’s claims, and Caesar without the legions of Caesar, without a standing army, without a bodyguard, without a palace, without a fixed revenue. If ever any man had the right to say that he ruled by a Right Divine, it was Mohammad, for he had all the power without instruments and without its support. He cared not for dressing of power. The simplicity of his private life was in keeping with his public life.”

While we are reviewing statements from famous non-Muslims about Prophet Muhammad, peace and blessings be upon him, consider this:
“Philosopher, orator, apostle, legislator, warrior, conqueror of ideas, restorer of rational dogmas, of a cult without images; the founder of twenty terrestrial empires and of one spiritual empire, that is Muhammad. As regards all standards by which human greatness may be measured, we may well ask, is there any man greater than he?”

And then we read what George Bernard Shaw, a famous writer and non-Muslim says:
“He must be called the Savior of Humanity. I believe that if a man like him were to assume the dictatorship of the modern world, he would succeed in solving its problems in a way that would bring it much needed peace and happiness.”

What should we think about our prophet Muhammad, peace and blessings be upon him, when someone with the worldly status such as Mahatma Gandhi, speaking on the character of Muhammad, peace and blessings be upon him, says in ‘Young India’:
“I wanted to know the best of one who holds today undisputed sway over the hearts of millions of mankind… I became more than convinced that it was not the sword that won a place for Islam in those days in the scheme of life. It was the rigid simplicity, the utter self-effacement of the Prophet, the scrupulous regard for his pledges, his intense devotion to his friends and followers, his intrepidity, his fearlessness, his absolute trust in God and in his own mission. These and not the sword carried everything before them and surmounted every obstacle. When I closed the 2nd volume (of the Prophet’s biography), I was sorry there was not more for me to read of the great life.”

English author Thomas Carlyle in his ‘Heroes and Hero Worship’, was simply amazed:
“How one man single handedly, could weld warring tribes and wandering Bedouins into a most powerful and civilized nation in less than two decades.”

And Diwan Chand Sharma wrote in “The Prophets of the East”:
“Muhammad was the soul of kindness, and his influence was felt and never forgotten by those around him”

Muhammad, peace and blessings be upon him, was nothing more or less than a human being, but he was a man with a noble mission, which was to unite humanity on the worship of ONE and ONLY ONE GOD and to teach them the way to honest and upright living based on the commands of God. He always described himself as, ‘A Servant and Messenger of God’ and so indeed every action of his proclaimed to be.

Speaking on the aspect of equality before God in Islam, the famous poetess of India, Sarojini Naidu says:
“It was the first religion that preached and practiced democracy; for, in the mosque, when the call for prayer is sounded and worshippers are gathered together, the democracy of Islam is embodied five times a day when the peasant and king kneel side by side and proclaim: ‘God Alone is Great’… I have been struck over and over again by this indivisible unity of Islam that makes man instinctively a brother.”

In the words of Professor Hurgronje:
“The league of nations founded by the prophet of Islam put the principle of international unity and human brotherhood on such universal foundations as to show candle to other nations.” He continues, “the fact is that no nation of the world can show a parallel to what Islam has done towards the realization of the idea of the League of Nations.”

Edward Gibbon and Simon Ockley, on the profession of ISLAM, writes in “History of the Saracen Empires”:
“I BELIEVE IN ONE GOD, AND MAHOMET, AN APOSTLE OF GOD’ is the simple and invariable profession of Islam. The intellectual image of the Deity has never been degraded by any visible idol; the honor of the Prophet have never transgressed the measure of human virtues; and his living precepts have restrained the gratitude of his disciples within the bounds of reason and religion.”
[History of the Saracen Empires, London, 1870, p. 54]

EWolfgang Goethe, perhaps the greatest European poet ever, wrote about Prophet Muhammad, peace and blessings be upon him. He said:
“He is a prophet and not a poet and therefore his Koran is to be seen as Divine Law and not as a book of a human being, made for education or entertainment.”