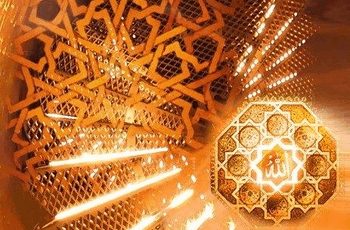 Whether we regard Him as a divinely inspired Prophet, a bold and far sighted reformer, no individual figure in the history of mankind is so impressive as Him- Muhammad.

The Arabs of the pre Islamic period were groping about in the dark and ignorance, entangled in a mesh of superstitions which was paralyzing their minds and driving them to lead an animal like life. The woman was a marketable commodity and regarded like a piece of in-animate property inter tribal relationships were fragile.

The Arabs felt the need of reform of the hollowness of idol worship, old usages and customs, religious ceremonials and meaningless rituals which could not be destroyed without shaking the Arab society completely. Yet, they shrank from casting the first stone at their established religion.

Only one like Muhammad burning with divine love and fired with holy zeal could have assumed the mission and undertaken duties involving such immense sacrifice. It was a stake of life and death but he threw himself into the conflict with all His might only to emerge from it purified exalted, fortified and illumined. The youth of Muhammad born of Bani Hashim in Makkah in the year 570 AD was full of modesty, virtue and grace. He proved Himself to be the ideal of manhood possessing a spotless character. Prophet Muhammad was the most obliging to his compatriots, the most honest in His talk and the mildest in temper. He was the most gentle hearted, chaste and hospitable. The mother of believers (Khadija RTA) once said he unites uterine relationships, help the poor and needy, entertains guests and endures hardships in the path of truthfulness.

Prophet Muhammad’s stamina for endurance and forgiveness are outstanding. Unlike everybody, the more he was hurt or injured the more patient and clement he became His courage, his succor and Might are distinguishable. Sayidna AU (RTA) said about the prophet. “When ever a fight grew fierce and the eyes of the fighters went red, we usetito resort to the prophet for succor. He was always the closest to the enemy. (ASSHIFA 1/89)

Mohammad was the most modest and the first one to cast his eyes down. Abu Sa’id Alkhudri said, he does not stare at anybody’s face. He always casts his eyes down. He looks at the ground more than he looks skywards. He was shier than a virgin in her boudoir. (Sahih Al Buhari 1/504).

Even before the prophet hood, Muhammad was nick named Al-Amin i.e the truthful, trustworthy. Even then, in Jahiliyya days they used to turn to him for Judgment and consultation owing to his maintenance of trust, even when he immigrated from Makkah he did not forget to ask Ali bin Abi Talib (May Allah Bless Him) to return trusts which were in his custody to their owners. Some of these trusts belong to Quraish infidels who forced him out from his homeland.

Clemency is one of his many attributes. The city which had treated him so cruelly, driven him and his faithful band out for refuge amongst strangers, which has sworn his life and the lives of his devoted disciples lay at his feet. His old persecutors relentless and ruthless who had disgraced humanity by inflicting cruel outrages upon inoffensive men and women and even upon the lifeless dead were now completely at his mercy. But in the hour of his triumph, every evil suffered was forgotten, every injury inflicted was forgiven and a general amnesty was extended to the population of MAKKAH!

Another example of his mercies was when alt the enemies of his faith put down their weapons and bowed their heads waiting for him to pass judgment and while 10,000 swords of the Muslims were glittering on the day of conquest over the hills of Makkah, he merely said to the enemies, Disperse, you are free!”

Another eloquent character – fidelity: He never forgot his good wife Khadijah. Long afterwards, Aisha (RTA) his young favourite wife, a woman who had in deed distinguished herself among Muslims by alt manner of qualities through her whole long life, this young brilliant woman one day questioned him “am I not better than Khadijah, she was a widow, old and had lost her looks. You love me better that you did her?”.

“No, by Allah”, answered the Prophet.” She believed in me when none else would believe. In the whole world I had but one friend, and she was that!” That’s Muhammad, the water of life, the Pride of Humanity! The above description is in fact no more than a rapid review of Prophet Mohammad’s aspects of full perfection. No one can ever claim to be possessed of full knowledge or complete mastery of the great attributes of the greatest man in this universe. No one can ever give this Man, top of perfection, his due description.

Prophet Muhammad defended human rights males and females’ young or old inspite of their social status. He also endorsed a number of sublime principles in this field. During his farewell hajj sermon, He strictly forbade the infringement upon the lives, property and honour of others. This infact happened before the world knew:

Last prophet Muhammad which would be a great asset to him. As Muhammad is the greatest benefactor of humanity, every Muslim should possess deepest love for him. Every deed of his Life is to be followed by every individual of Muslim Ummah.

Highest love for the prophet is made a test of our faith. Allah the almighty has described and explained the status of Muhammad

“Say (Oh Muhammad to mankind) if you really love Allah then follow me (i.e accept Islamic Monotheism, follow the Quran and the Sunnah) Allah will love you…” (3:3)

The prophet in a hadith has said “none of you has faith unless I am dearer to him than his father, son and all mankind.”

In a tribute to the messenger of Allah, Saydn Abubakar a most trusted and best friend of the Rasul wrote a few verses in which he’s imploring his eye and soul to weep in honour of the passing away of this noble being who is departing to the graves. Saydn Abubakar, uncertain of fate in life without Muhammad prefers that all creation had died along with him to a lasting bliss. He then prays to the Lord, owner of majesty and bounty, to benedict and shower peace and blessings on the leader of the Prophets, the master of messengers. Muhammad.

Muhammad came by a revelation from Allah. He came with a religion which suits the natural human quality and takes into consideration of the Spirit’s needs as well as the body’s demands in addition to balancing between the performance for the mundane Life and the hereafter. He who sent Muhammad with the mission of Islam is Allah – the creator of all created being and who is quite acquainted with what is suitable to their needs and instincts. If this instinct in man is led astray it leads to the spoil of the Life of a being on earth as well as the appearance of a chronic psychological and social disease.