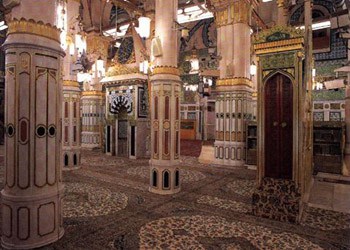 The Prophet always avoided the extremes in life and followed the middle of the road. He was temperate in conduct and expression, following the Golden Mean between the two extremes, neither tending to this way nor to that way but maintaining a moderate course of action under all circumstances. The Prophet taught moderation to his people, both in deeds and words. It is reported that the Prophet said: “Those people who went to extremes (in practicing their religion) were destroyed” (Muslim). He said this because he was there to promote extreme following. Extreme practices were only detrimental to the person practicing it and the society where it is being practiced.

Thus he was for moderation. Once three persons came to inquire from the household of the Prophet about his prayer. One of them said: “I shall continuously fast without interruption.” Another said: “I shall, in future, spend the whole night in praying.” And the third one said: “I shall abstain from women and shall never marry.”

Later, the Prophet came and asked them about what they had said. He then replied:

Listen, I fear Allah more than all of you do, and l am more conscious of my duties to Him than all of you are. I observe a fast, but then I break it. I offer prayers at night, but sleep as well, and I marry women. This is my way of living. One who turns away from my practice (Sunnah) does not belong to me. (Bukhari, 5063)

The Prophet also said: “Be moderate. Practice religion commensurate with your physical strength. Offer prayers in the morning and evening and in some parts of the evening and in some parts of the night. Follow the middle course; you will reach the goal” (Bukhari). It is also reported that the Prophet was very moderate in all his actions. Both his prayers and sermons were of moderate duration. In fact, the whole of his life was an example of perfect moderation. The basic principle of the ‘Golden Mean’ was seen in its perfection in the life of the Prophet, in word and deed. The Prophet stressed the great merit and importance of a balanced life on the basis of the ‘Golden Mean’ between the two extreme ways of life in these words:

It is true that Allah certainly desires that people should not indulge in idle pleasures of this world, and that they should follow a decent life of goodness, piety, and justice to win the pleasure of their Lord. But He does not want them to lead gloomy lives, nor engage in perpetual worship in isolation. He requires them to lead normal lives in a family relationship on a social level, practicing goodness and righteousness in their affairs, private, public, national, and international. The only way for them to achieve this righteousness was for them to be moderate, modest and also be polite in their speeches. He demonstrated the values of politeness everywhere he went.