The Almighty Allah sent our prophet Muhammad to mankind after a break in the series of messengers at a time when the world was immersed in a deep darkness of ignorance. The Prophet and his companions started spreading the religion and the disbelievers challenged his message and unsheathed their swords to fight him. The Muslims faced them in the battle of Badr and realised a great victory by Allah’s command. The flag of Islam was raised high and the disbelievers returned to Makkah disgraced, everyone mourning the killing of his relative and lamenting over his misfortune.
The defeat was so painful for the disbelievers that they resolved to confront the Muslims again. They spent a whole year amassing as many weapons and men as they could to fight the Muslims. They left Makkah for Madeenah in the third year of Hijrah in order to avenge their defeat during the Battle of Badr.
Upon reaching Madeenah they camped at mount Uhud. Meanwhile some men among the Muslims who were unfortunate enough not to have participated in the Battle of Badr and were enthusiastic about Jihad advised the Messenger of Allah to go out and meet the enemy. The Prophet agreed and all the Muslims likewise were determined to go out and meet them.

After performing Friday Prayers, the Prophet entered his house, and emerged wearing an armoured breastplate, and declared, “It is not appropriate for any Prophet who has once put on his armour to take it off again until Allah has judged between him and his enemy (by granting one victory over the other).”
The Prophet then set out in the company of one thousand men, one thi  rd of whom turned back home after travelling part of the way towards Mount Uhud under the influence of the head of the hypocrites; Abdullah bin Ubay. The Prophet proceeded with the remaining men until he camped at the trail of Mount Uhud putting the mountain behind him and facing the idolaters. He assigned some fifty archers under the command of Abdullah ibn Jubair to man a small strategic foothill and commanded them not to leave their position under any circumstances.
On the morning of the following day, the Prophet mobilized his army, inspected their armour, paraded the youths, sent back those of them who were still too young to fight and approved the participation of others. Among those he allowed to participate were Samrah ibn Jundub and Raafi’ ibn Khadeej; they were then but fifteen years old. 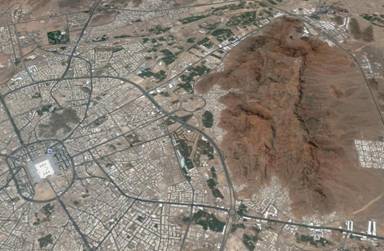