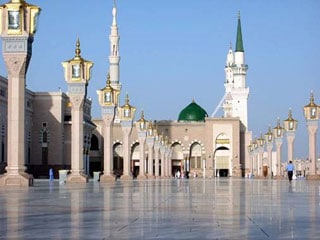 The recipients of this quality were not limited to just the Muslim nation, but it also extended to non-Muslims, some of who spent all their effort trying to harm the Prophet and his mission.This mercy and forgiveness is clearly demonstrated in the fact that the Prophet, may the mercy and blessings of God be upon him, never took revenge on anyone for personal reasons and always forgave even his staunch enemies.  Aisha said that the Prophet never took revenge on his own behalf on anyone.  She also said that he never returned evil for evil, but he would forgive and pardon.  This will, God willing, become clear after a deep analysis of the following accounts of his life.

In the earlier portion of his mission, the Prophet traveled to the city of Taif, a city located in the mountains nearby to Mecca, in order to invite them to accept Islam.  The leaders of Taif, however, were rude and discourteous in their treatment of the Prophet.  Not being content with their insolent attitude towards him, they even stirred up some gangs of the town to harass him.  This riff-raff followed the Prophet shouting at and abusing him, and throwing stones at him, until he was compelled to take refuge in an orchard.  Thus the Prophet had to endure even more obstacles in Taif than he had had to face in Mecca.  These ruffians, stationed either side of the path, threw stones at him until his feet were injured and smeared with blood.  These oppressions so grievously dejected the Prophet and plunged him into in such a state of depression that a prayer, citing his helplessness and pitiable condition and seeking the aid of God, spontaneously came from his lips:
“O God, to You I complain of my weakness, lack of resources and humiliation before these people.  You are the Most Merciful, the Lord of the weak and my Master.  To whom will You consign me?  To one estranged, bearing ill will, or an enemy given power over me?  If You do not assign me any worth, I care not, for Your favor is abundant upon me.  I seek refuge in the light of Your countenance by which all darkness is dispelled and every affair of this world and the next is set right, lest Thy anger should descend upon me or Your displeasure light upon me.  I need only Your pleasure and satisfaction for only You enable me to do good and evade the evil.  There is no power and no might but You.”
The Lord then sent the angel of mountains, seeking the permission of the Prophet to join together the two hills and crush the city of Taif, between which it was located.  Out of his great tolerance and mercy, the Messenger of God replied,
“No!  For, I hope that God will bring forth from their loins people who will worship God alone, associating nothing with Him.” (Saheeh Muslim)

His mercy and compassion was so great that on more than one occasion, God, Himself, reprimanded him for it.  One of the greatest opponents of Islam and a personal enemy, was Abdullah bin Ubayy, the leader of the hypocrites of Medina.  Outwardly proclaiming Islam, he surreptitiously inflicted great harm to the Muslims and the mission of the Prophet.  Knowing his state of affairs, the Prophet Muhammad still offered the funeral prayer for him and prayed to God for his forgiveness.  The Quran mentions this incident in these words:
“And never (O Muhammad) pray for one of them who dies, nor stand by his grave.  Lo!  They disbelieve in God and His Messenger, and they died while they were evil doers.” (Quran 9:84)
Abdullah bin Ubayy worked all his life against Muhammad and Islam and left no stone unturned so as to bring him into disrepute and try to defeat his mission.  He withdrew his three hundered supporters in the battle of Uhud and thus almost broke the backbone of the Muslims at one stroke.  He engaged in intrigues and acts of hostility against the Prophet of Islam and the Muslims.  It was he who tried to bring shame to the Prophet by inciting his allies to falsely accuse the Prophet’s wife, Aisha, of adultery in order to discredit him and his message.

The mercy of the Prophet even extended to those who brutally killed and then mutilated the body of his uncle Hamzah, one of the most beloved of people to the Prophet.  Hamzah was one of the earliest to accept Islam and, through his power and position in the Quraishite hierarchy, diverted much harm from the Muslims.  An Abyssinian slave of the wife of Abu Sufyan, Hind, sought out and killed Hamzah in the battle of Uhud.  The night before the victory of Mecca, Abu Sufyan accepted Islam, fearing the vengeance of the Prophet, may the mercy and blessings of God be upon him.  The latter forgave him and sought no retribution for his years of enmity.
After Hind had killed Hamzah she mutilated his body by cutting his chest and tearing his liver and heart into pieces.  When she quietly came to the Prophet and accepted Islam, he recognized her but did not say anything.  She was so impressed by his magnanimity and stature that she said, “O Messenger of God, no tent was more deserted in my eyes than yours; but today no tent is more lovely in my eyes than yours.”
Ikrama, son of Abu Jahl, was a great enemy of the Prophet and Islam.  He ran away after the victory of Mecca and went to Yemen.  After his wife embraced Islam,  she brought him to the Prophet Muhammad under her protection.  He was so pleased to see him that he greeted him with the words:
“O emigrant rider, welcome.”

Safwan bin Umaya, one of the chiefs of Mecca, was also a great enemy of Muhammad and Islam.  He promised a reward to Umair ibn Wahab if he managed to kill Muhammad.  When Mecca was conquered, Safwan ran away to Jeddah in the  hope of finding a berth that would take him to Yemen by sea.  Umair ibn Wahab came to Muhammad and said, “O Messenger of God!  Safwan ibn Umayya,  a chief of his tribe, has run away from fear of what you might do to him and threatens to cast himself into the sea.”  The Prophet sent him a  guarantee of protection and, when he returned, he requested Muhammad to give him two months to come to a decision..  He was given four months, after which he became a Muslim by his own will.
Habir ibn al-Aswad was another vicious enemy of Muhammad and Islam. He inflicted a serious injury to Zainab, daughter of the Noble Prophet when she decided to migrate to Medina.  She was pregnant when she started her migration, and the polytheists of Mecca tried to stop her from leaving.  This particular man, Habbar bin al-Aswad, physically assaulted her and intentionally caused her to fall down from her camel.  Her fall had caused her to miscarry her baby, and she herself, was badly hurt.  He had committed many other crimes against Muslims as well.  He wanted flee to Persia but, when he decided to come to Muhammad instead, the Prophet magnanimously forgave him.

The tribe of Quraish the were archenemies of Islam and, for a period of thirteen years while he was still in Mecca, they would rebuke the Prophet, taunt and mock him, beat him and abuse him, both physically and mentally.  They placed the afterbirth of a camel on his back while he prayed, and they boycotted him and his tribe until the social sanctions became unbearable.  They plotted and attempted to kill him on more than one occasion, and when the Prophet escaped to Medina, they rallied the majority of the Arab tribes and waged many wars against him.  Yet, when he entered Mecca victorious with an army of 10,000, he did not take revenge on anyone.  The Prophet said to the Quraish:
“O people of Quraish!  What do you think I will do to you?
Hoping for a good response, they said: “You will do good.  You are a noble brother, son of a noble brother.”
The Prophet then said:
“Then I say to you what Joseph said to his brothers: ‘There is no blame upon you.’  Go!  For you all free!.”[1]
Rarely in the annals of history can we read such an instance of forgiveness. Even his deadliest enemy Abu Sufyan, who led so many battles against Islam, was forgiven, as was any person who stayed in his house and did not come to fight him.
The Prophet was all for forgiveness and no amount of crime or aggression against him was too great to be forgiven by him.  He was the complete example of forgiveness and kindness, as mentioned in the following verse of the Quran:
“Keep to forgiveness (O Muhammad), and enjoin kindness, and turn away from the ignorant.” (Quran 7:199)
He always repelled evil with the good of forgiveness and kind behavior for, in his view, an antidote was better than poison.  He believed and practiced the precept that love could foil hatred, and aggression could be won over by forgiveness.  He overcame the ignorance of the people with the knowledge of Islam, and the folly and evil of the people with his kind and forgiving treatment.  With his forgiveness, he freed people from the bondage of sin and crime, and also made them great friends of Islam.  He was an epitome of the verse of the Quran:
“Good and evil are not alike.  Repel evil with what is better.  Then he, between whom and you there was hatred, will become as though he was a bosom friend.” (Quran 41:34)