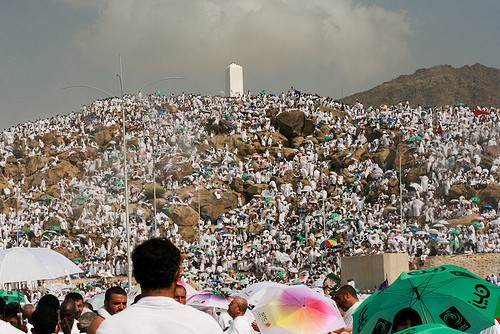 This sermon was delivered on the Ninth day of Dhul-Hijjah, 10 A.H. (623AD) in the Uranah valley of Mount Arafat in Mecca. It was the occasion of annual rites of Hajj. It is also known as the Farewell Pilgrimage.  After praising and thanking Allah the Prophet Muhammad (May the Peace be upon him) began with the words:

O People! Lend me an attentive ear, for I know not whether after this year I shall ever be amongst you again. Therefore, listen carefully to what I am saying and take these words to those who could not be present here today.

O People! Just as you regard this month, this day, this city as sacred, so regard the life and property of every Muslim a sacred trust. Return the goods entrusted to you to their rightful owners. Hurt no one so that no one may hurt you. Remember that you will indeed meet your Lord, and that he will indeed reckon your deeds.

Allah has forbidden you to take usury; therefore all interest obligations shall henceforth be waived. Your capital is yours to keep .You will neither inflict nor suffer any inequality. Allah has judged that there shall be no interest and that all interest due to Abbas Ibn ‘Aal-Muttalib be waived.

Every right arising out of homicide in pre-Islamic days is henceforth waived and the first such right that I waive is that arising from the murder of Rabiah ibn al-Harithiah.

O men! The unbelievers indulge in tampering with the calendar in order to make permissible that which Allah forbade, and to prohibit what Allah has made permissible. With Allah the months are twelve in number. Four of them are holy, they are successive, except one occurs singly between the months of Jumada and Shaban [meaning Rajab].

Beware of Satan, for the safety of your religion. He has lost all hope that he will be able to lead you astray in big things so beware of following him in small things.

O People it is true that you have certain rights with regard to your women but they also have rights over you. Remember that you have taken them as your wives only under Allah’s trust and with His permission. If they abide by your right then to them belongs the right to be fed and clothed in kindness. Do treat your women well and be kind to them for they are your partners and committed helpers. And it is your right that they do not make friends with any one of whom you do not approve, as well never to be unchaste.

O People! Listen to me in earnest, worship Allah, say your five daily prayers, fast during month of Ramadan, and give your wealth in Zakat .Perform Hajj if you can afford it.

Do not therefore do injustice to yourselves. Remember one day you will meet Allah and answer your deeds. So beware, do not astray from the path of righteousness after I am gone.

O People! No Prophet or apostle will come after me and no new faith will be born. Reason well, therefore O People, and understand words that I convey to you. I leave behind me two things, the Quran and the Sunnah and if you follow these you will never go astray.

O Allah, be my witness, that I have conveyed your message to Your people.

As part of this sermon, the prophet recited to them a revelation from Allah, which he had just received, and which completed the Quran, for it was the last passage to be revealed:

This day the disbeliever’s despair of prevailing against your religion, so fear them not, but fear Me [Allah]! This day have I perfected for you, your religion and fulfilled My favor unto you, and it hath been My good pleasure to choose Islam for you as your religion. (Surah 5, Ayah 3)

At the request of the Prophet, Safwan’s brother Rabiah (RA) repeated the sermon.  His loud voice faithfully relayed the sermon sentence by sentence to over ten thousand gathered on the occasion. Towards the end of his sermon, the Prophet asked “O people, have I faithfully delivered unto you my message?” A powerful murmur of asserted, “O Allah! Yes!”  Arising from the thousands of pilgrims, the vibrant words “Allahumma na’m,” rolled like thunder throughout the valley. The Prophet raised his forefinger and said: “O Allah bear witness that I have conveyed your message to your people.”