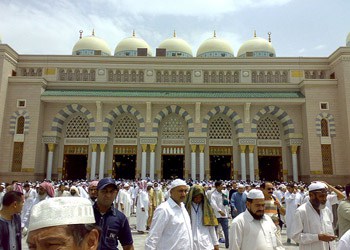 Traditional scholarship’s divides Prophet Muhammad’s life into Makkan and Madinahn phases. This is chronologically valid and represents the two broad aspects of his life before and after the watershed event of the Migration. It is historically important and marks the beginning of the Islamic calendar. Additionally I believe Muhammad’s struggle can be naturally divided into seven phases. Each phase brings forth a different aspect of his personality and highlights a different facet of his mission. Studying the Messenger’s mission for its various phases and analyzing its internal dynamics is important as it gives the narrative relevance for today. Since his life is better documented than the lives of other prophets and leaders of major world religions, it is possible to build this analysis on a historical foundation.

The Search for Light in a Period of Darkness: The Seeker of Truth

As his biography (Seera) is recorded we find Prophet Muhammad pondering over societal ills for years. The society he was born in was in a state of moral, religious, economic and social chaos. It is difficult to resist drawing analogies between the seventh century world and the state of the human morality in today’s world at the beginning of the new millennium. The nuclear man-woman two-parent family, as a core unit of society has eroded seriously in the West. Brazen sexual exploitation in the media is commonplace and illicit sex condoned and even accepted. Violence at home, against women, children, and violence in the streets, is frightfully routine. Substance abuse is widespread, with United States as the largest consumer of drugs in the world. Alcoholism is rampant, especially among college students, with only feeble attempts being made to address the problem. African- Americans have been liberated as slaves for a century and a half, yet many are still trapped in an unending cycle of poverty and discrimination, which is in a way a form of economic slavery. Because of a system that allows unrestrained growth of wealth without encouraging proper redistribution, economic disparities and injustices continue to grow at an alarming rate.
There are many excellent characteristics in Western societies, especially in the US that include the freedom of thought, speech and assembly, a tolerant attitude toward eccentricities in human nature and an ambition to be a just and compassionate society. These qualities of the ordinary American however are not always reflected in the policy makers and political leaders.

The unraveling of the moral fabric in today’s society must weigh heavily on the minds of individuals with insight. They can draw personal solace and inspiration from the Prophet’s life. The Arab tribal society of the Seventh century, whose structure was based on greed, debauchery, and violence, was changed in a very short time, by the Prophet, into a society with one of the highest moral standards in history. Compassion, humility, devotion to God and egalitarianism replaced the old well-entrenched tribal attitudes of pride in wealth, family and class and self-centered behavior. Women, for the first time in history, had rights and dignity, and the vulnerable and weak sections of the society were protected. Sexuality was removed from public prurience and became private and wholesome. Wealth was re-circulated so that even the poorest segments of the society were infused with energy and indigence became nearly extinct.

The Warner and Exhorter
During one his meditative trips to a cave near Makkah, Prophet Muhammad receives the revelation. Divine revelation is the reaffirmation of the fact that celestial knowledge is essential in guiding the inherently limited human intellect. The profundity of this realization that he is the recipient of this divine revelation and the enormity of the task ahead overawes him. Initially he shares the message only with his closest family and a few loyal supporters. It is both fascinating and revealing that even the individual who would later be rated as the most influential man in human history had these initial periods of doubt and uncertainty about his mission. It was the reassurance from the Quran and the confidence and support of his wife Khadijah (may Allah be pleased with her), and his close companions which provided him the support he needs-surely a lesson for us lesser mortals!

The Stoic Optimist
The next facet of his life is of bringing about proactive change by inviting people (Dawa) to Islam. With it comes the inevitable hostility of the entrenched powers in the society. Change is always threatening, and the greater the change, the more threatening it is. This would be true of the change against any established system of practices, whether it be economic, social or behavioral. It would also be true for change in personal behavior like wearing immodest clothing, promiscuity, and consumption of intoxicants. Changing attitudes that valued pride in wealth and country or class and color of the skin over all else would also be difficult. Not surprisingly the struggle for change becomes life threatening. Muhammad (Peace be upon him) had to lay his life on the line and on several occasions the nascent Muslim community faced the possibility of total extinction. Fortitude in the face of adversity is the salient feature of this phase. The patience and stoicism Muhammad displays during this phase has been a source of strength to many a Muslim who has found himself beleaguered by apparently hopeless circumstances

The Pluralistic Leader
The Migration, which marks the beginning of the next phase, involves careful planning and meticulous execution. He demonstrates that self-help and reliance on Allah go together and are both essential for success. With his nomination by the community in Madinah to a position of leadership, he shows another facet of his personality: the capacity to create a truly pluralistic society with equity and dignity for all religious and ethnic groups. In a very short period after the Migration to Madinah, Muhammad proves he is capable of uniting various factions and setting exemplary standards of cooperation between them. He makes a seamless switch from being a person under constant persecution to a leader with a large administrative and judicial responsibility. The “Covenant (Constitution) of Madinah” that lays out the rules of living in a pluralistic society is a document that needs to be studied carefully and implemented to the fullest extent in today’s inescapably multi-religious and multi-cultural world.

The Courageous Yet Reluctant Warrior
After a brief respite, his mission is consumed by the need to fight wars of survival. These three wars in four years, Badr, Uhad and Ahzab, besides posing a physical threat, must have been extremely distracting and demanding of his time and energy. Yet the work of building the community goes on.
It is important to remember that even though faced with very aggressive proponents the Prophet and his followers never initiated or instigated any wars. Muhammad and the Muslims engaged in these battles with great discipline, avoiding injury to the innocent and using only the minimum force needed. Women, children and non-combatants were not to be harmed. When the enemy stopped fighting, he was to be given immediate sanctuary. Striking a blow in anger, even in battle, was prohibited. He uses innovative strategies in the battles, which include the use of the trench as a defense. During the digging of the trench he is an active participant. He consults frequently (Shura) with his companions and follows the majority opinion (Ijma’), even when it sometimes goes against his own judgment.

The Statesman Par Excellence and Teacher
During the next phase, he shows the capacity to compromise and demonstrates the foresight and wisdom to realize that peace, even at seemingly unfavorable terms, is better than hostility. The “Treaty of Hudaybia” also needs to be studied and emulated by all who negotiate with their opponents. The peace dividend, following this treaty with the Quraysh, is huge and results in an exponential increase in the number of Muslims.
This also allows the building of a model and just society that functions in a coherent manner. Wealth is allowed to be accumulated but has to be circulated fairly into even the tiniest capillaries of the community’s economic system. It is an egalitarian society with equity and justice for all, governed by mutual consultation, equality before the law and protection of its most vulnerable members, women, children, orphans, indigents and slaves.
As illustrated by many incidents from this phase of his life, the Prophet proves to be an exemplary statesman. He mediates disputes, defuses potentially explosive situations with ease, allowing the parties to the conflict to walk away as friends and allies. He is unafraid to take risks but is never reckless and compromises for the sake of peace. His emissaries to other nations bring with them a message of cooperation seeking common ground. When he gives a pledge, he always keeps it. If the other party breaks the pledge, he does not flinch from measures that are appropriate to maintain the sanctity of the pledge.

The Compassionate Ruler and Spiritual Leader.
The final phase begins with the conquest of Makkah, which is a demonstration of meticulous planning and the use of overwhelming force to achieve a victory with practically no loss of life on either side of the battle front. The stunning magnanimity and humility shown during victory by Muhammad and his companions is unmatched in history. He is humble in victory, compassionate, and forgiving to even his most intractable opponents.
The final sermon consolidates the social, economic, and moral changes that have been brought about in the society. It is time to prepare for the end.
The anatomy of the mission, its growth and evolution in some ways parallels the various stages of human life itself. These various phases reflect not only the growing sophistication of the message but also the increasing maturity of the audience to whom the message is directed. The audience grows in its understanding of what it would take to bear the burden of passing on the message to posterity. The Prophet’s mission in its most fundamental analysis was to interpret and spread the Quranic ideology. This Quran centered spirituality remains the constant theme through all of the phases of his life. The Quran says about him “Indeed there is for you in the Messenger of Allah an excellent pattern” (Quran 33:21). His wife Ayesha (may Allah be pleased with her) calls him the living embodiment of the Quran. It is this complementary bequest of the Quran and Sunna that is our special blessing.
Over time, many differences based on dogma, politics, personality cults and egos have emerged amongst the followers of Islam. In spite of many heterodox sects, the core messages of Quran, and its realization in the life of the Prophet are alive and potent, and continue to provide spiritual solace, intellectual satisfaction and societal discipline to many making Islam the fastest growing religion in the world.
Javeed Akhter, is the Executive Director of the Chicago based International Strategy and Policy Institute and he is the author of the book “The seven phases of Prophet Muhammad’s Life,”