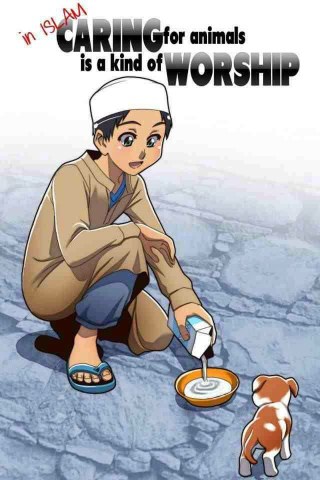 When we mention the religion of Islam, often the first word that comes to mind is peace.  The word Islam is derived from the infinitive ‘sa-la-ma‘ which also is the root for the word salam, which means peace. Islam is a way of life that promotes peace, dignity, respect, tolerance, justice and mercy. All of these qualities are tempered with serenity (calmness) that comes from submission to Allah. Perhaps the greatest of these qualities is mercy.  It is one of the overriding themes throughout the Qur’an.

{Certainly, We have brought them a Book (the Qur’an) which We have explained in detail with knowledge, – guidance, and a mercy to a people who believe.}  (Al-A`raf 7: 52)

Mercy is that ethereal quality that embodies gentleness, piety, care, consideration, love, and forgiveness.  When these qualities are observable in this world, they are a mere reflection of Allah’s mercy towards His creation.  Allah the Almighty said clearly that Prophet Muhammad (peace and blessings of Allah be upon him) was a mercy for all creation, not just for his family and friends, for the Arab nation, for the people of his generation, or for human beings alone. 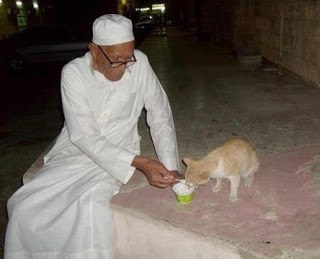 Prophet Muhammad (peace and blessings of Allah be upon him) was the embodiment of mercy, he showed compassion to all those around him, family, orphans, friends, strangers and even enemies.  He also treated the environment and animals with respect and mercy.  He taught his followers that because animals were part of Allah’s creation they should be treated with dignity and due care.

The traditions of Prophet Muhammad (peace and blessings of Allah be upon him) remind us that humankind was put on this earth to be the custodian of Allah’s creation.  Treating animals with kindness and mercy is just one of the responsibilities embedded in that custodianship. Prophet Muhammad’s words and behavior make it clear that causing defenseless creatures pain and suffering is not only completely unacceptable, but we will also be answerable to Allah the Almighty for such actions.

“If someone kills a sparrow for fun, the sparrow will cry out on the Day of Judgment, ‘O Lord! That person killed me in vain!  He did not kill me for any useful purpose.'” (An-Nasa’i)

The Prophet (peace and blessings of Allah be upon him) said, “Whoever kills a sparrow or anything bigger than that without a just cause, Allah will hold him accountable on the Day of Judgment.”  The listeners asked, “O Messenger of Allah, what is a just cause?” He replied, “That he will kill it to eat, not simply to chop off its head and then throw it away.“ (An–Nasa’i)

Islam expects humankind to treat all animals (all living creatures – birds, sea creatures, and insects) with respect and dignity.  Prophet Muhammad continuously advised people to show kindness.  He forbade the practice of cutting tails and manes of horses, of branding animals at any soft spot, and of keeping horses saddled unnecessarily (Muslim). If the Prophet saw any animal over-burdened or ill-fed he would speak mildly to the owner and say, “Fear Allah in your treatment of animals.” (Abu Dawud)

However, refraining from physical cruelty is not enough; abstaining from mental cruelty is equally important.  Even a bird’s emotional distress should be treated seriously.  One of Prophet Muhammad’s Companions narrates, “We were on a journey and during the Prophet’s absence, we saw a bird with its two chicks; we took them.  The mother bird was circling above us in the air, beating its wings in grief. When Prophet Muhammad (peace and blessings of Allah be upon him) returned he said, “Who has distressed this bird by taking its chicks?  Return them to her.“ (Abu Dawud and Authenticated by Al-Albani)

In pre- Islamic times, pagan superstitions and polytheistic practices included acts of torture and cruelty to animals.  Islam condemned this and put a stop to all such practices.  When Prophet Muhammad and his Companions migrated to Madinah, they noticed that people used to cut off camels’ humps and the fat tails of sheep for food.  The Prophet forbade them from doing this and said, “Whatever is cut off an animal while it is still alive, is carrion (i.e., unlawful to eat).” (At-Tirmidhi)

In Islam, the rules pertaining to slaughtering animals are very strict and fixed.  Protecting animals from pain and undue suffering is paramount:

Humankind must strike a balance in their treatment of animals. All living creatures were put on this earth by Allah for our benefit.  They are not at the same level as human beings but neither should they be treated cruelly.  It is humankind’s responsibility to see that they have food, water, and shelter from the elements.  Living creatures must not be overburdened, abused, or tortured and doing so will surely result in Allah’s just punishment.  A true believer in Allah demonstrates his or her belief by respecting the entire creation, and Prophet Muhammad’s character and actions are a shinning example of respect for all that exists.