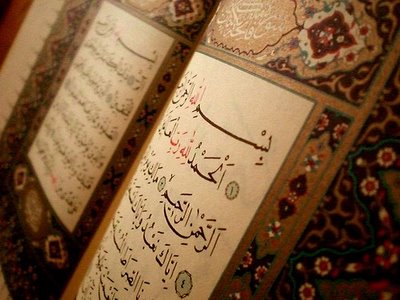 Praise be only to God, and peace and blessings be upon his last Prophet… and so:

s, endowments, calling and guidance, and attached to it the prepared record by the representative of the branch of the ministry of Islamic affairs, and the representative of the organization of enjoining the right and forbidding the wrong at Al Quassim, which was transmitted to the committee from the general secretariat of the organization of the greatest scientists under the number of (139/c) and the date of 8/1/1418 A.H, and the record included many paragraphs (sections) that the committee answered it as follows:

Section one: Reading on water containing saffron, and then dipping papers in it, then drying it, and after that putting (dissolving) it in water, then drinking it:

The answer: Reading on water containing saffron, then dipping papers in it, then it is sold to the people for recovery using it- This isn’t permissible and must be prevented, because it is a deception and taking the people’s money falsely, also it is not from Ruqyah As Shar’eeyah that is agreed on by the scientists; which is writing the verses in a clear way on a paper or on any purified thing, then washing this writing and drinking its washing water.

Section two: How true is that the patient (the person who is receiving Ruqyah) can imagine the envier from the reading, or through ordering the Jinn to incarnate to the patient his envier?

The answer: The patient’s imagination for the envier during reading on him, and the reader’s order to the patient to do that is a diabolism and not permissible; because it is a resorting to the Shaiatin (devils), as they are who incarnate to him in the shape of the human envier, and it is a prohibited performance because it is a diabolism, also it causes enmity between people, and the spread of fear and panic among the people, it is mentioned in this verse: “And there were men from mankind who sought refuge in men from the jinn, so they [only] increased them in burden” [Al Jinn 72:6]

Section three: Touching the woman’s body as her hand, forehead, or neck directly without a barrier with the excuse of pressuring and tightening on the Jinn inside her especially that touching is done by the doctors in hospitals, and what are the restrictions on that?

Section four: Putting large sized stamps written on it verses, supplications or calls, some them are for magic, others for envy, and others for Jinn. Then the stamp is dipped in a water containing saffron, then the papers are stamped, after that these papers are detached and drank by the patient:

The answer: The person who is treating by Ruqyah is not allowed to write verses and Islamic supplications in stamps dipped in water containing saffron, then these stamps are put on papers instead of writing, then these papers are washed and drank by the patient, because one of the conditions of the Ruqyah Ash Shar’eeya is that the intention of the patient and who treats with Ruqyah is the recovery using the Holy Qur’an while writing.

Section five: The patient should smell the skin of a wolf, claiming that it reveals whether there is a Jinn or not, as the Jinn -their claim- fears the wolf, scared away and get confused when he feels its existence.

The answer: The usage of the wolf’s skin to be smelled by the patient in order to know whether he is insane or not isn’t allowed, because it is a type of magic and bad belief, so it definitely must be prohibited. And their claim that the Jinn scares from the wolf is a legend which has no base.

Section six: Reading Qur’an during Ruqyah by using a microphone, through the phone with in a long distance, and reading on many people in the same time:

The answer: Ruqyah must be on the patient directly, and can’t be performed by using a microphone or through the phone, because this violates what the Prophet -peace be upon him-, his companions (may God be pleased with them) and their good followers had done, and he said: “If anyone introduces in our matter something which does not belong to it, will be rejected”. [Muslim]

Section seven: The usage of Jinn to know the envy or magic, also believing the incarnated Jinn to the patient claiming that the envy and magic

The answer: Using the Jin in determining the kind, place of infection and its cure is not allowed, because having aid from Jinn is disbelief. And God the Exalted said: {“And there were men from mankind who sought refuge in men from the jinn, so they [only] increased them in burden” [Al Jinn 72: 6]

And God the Almighty said: “And [mention, O Muúammad], the Day when He will gather them together [and say], “O company of jinn, you have [misled] many of mankind.” And their allies among mankind will say, “Our Lord, some of us made use of others, and we have [now] reached our term which you appointed for us.” He will say, “The Fire is your residence, wherein you will abide eternally, except for what Allah wills. Indeed, your Lord is Wise and Knowing.” [Al An’am 6: 128]

And the meaning of making use of each other that some of the mankind glorified the Jinn, surrender to them and got help from them, and Jinn served them according to their desires and brought to them what they ordered, for example telling them the type of disease and its cause, from what they are informed despite the man; and they might lie as they don’t believe, so it is not allowed to believe them.

Section eight: Playing some verses of the Qur’an on a voice recorder for hours at the patient’s place, and deleting certain verses concerning magic, others for envy, and others for Jinn:

The answer: Playing some verses of the Qur’an and supplications on a voice recorder is not a substitute for Ruqyah; because Ruqyah is a work that needs faith and intention while doing it, and interaction in order to spit on the patient, and the recorder can’t do that.

Section nine: Writing Qur’an and supplication on papers, and affixing it on a part of the body as the chest and so on, or tying and putting it on the tooth, also writing some of the charms from the legislative calls, tying it by skin and putting it under the bed or any other places, also hanging amulets if it was from Qur’an, supplication and calls:

The answer: Affixing the papers which are contains some verses of the Qur’an or calls on the body or a part of it, or putting it under the bed, are not allowed, as it is from the prohibited hanging of the charms according to his say: “Who hang any charms, God will never make him succeed”

And his speech: “spells, charms and love-potions are polytheism.”

Section ten: Some of the calls haven’t mentioned before as: “A strong rock, burning firebrand, May the eye of the envier turn against him and his beloved people”

The answer: This supplication has no foundation, and contains aggression on people other than the aggressor, so it is prohibited to be used, according to the Prophet’s -peace be upon him- speech: “If anyone introduces in our matter something which does not belong to it, will be rejected”.

And peace and blessings be upon our Prophet Muhammad, his family and his companions.