In the name of Allah the Most Gracious the Most Merciful

Man is conceited with his strength although it is Allah Who bestowed it upon him. Allah granted to this creature senses enabling him to go in the world of reality. Among the greatest of these sense organs is the eye with its delicate structure, perfect shape, beautiful appearance, and the ability of eyesight. This eye sees the signs of ability in the pages of this universe and reasons of belief exposed in the pages of the world and its corners. (In the shade of the Quran – In short)

Eye’s job:
There is a job for each limb in the human body. Allah Almighty created the eye for sublime job; it is created for seeing the path with its evils, the universe with its marvels, the family and beloved people, and the children and friends. It is created for seeing sun’s rise and setting and seeing the night followed by day and the day followed by night; it is created for scrutinizing the valleys and rivers. And all of that is just for reaching to one fact; knowing the One the Irresistible. (Minbaryyat, by Ahmed As-Sudais – in short)

Eye’s shyness, in the Islamic Shar’iah, is to guard itself from looking at what is made inviolable by Allah. When the eye is perfectly ashamed, it protects its owner, buries his bad qualities and propagates his good qualities.

Lustful look is the prelude to adultery:

Eyesight is the root of all evils that man faces. The eyesight produces notion, then the notion produces idea, then the idea produces desire, then the desire produces a volition that gets stronger and becomes a determination, then the act would surly occur as long as there is nothing to prevent it. (Ad-Daa’ wa Ad-Dawaa’)

It is narrated on the authority of Abu Hurayra (may Allah be pleased with him) that the Prophet (prayers and peace of Allah be upon him) said: “Allah Has written upon the son of Adam his share from Zina (adultery/fornication), he will inevitably experience it, thus the Zina of the eyes is looking (at what is forbidden), the Zina of the tongue is speaking (with what is forbidden), the self-wishes and desires, and the private parts accepts all that or refuses it. ” [Reported by Al-Bukhari]

And Al-Qasimy says in his comment on the saying of Allah almighty: {Tell the believing men to lower their gaze (from looking at forbidden things), and protect their private parts (from illegal sexual acts)} [Surat An-Nur 24:30]

“Lowering the gaze is mentioned before protecting the private parts because gaze is the prelude to adultery and reconnoiterer to profligacy.”

Gaze is one of the poisoned arrows of Satan and it is the reconnoiterer to lust. The prohibited look produces evil and bad notions in the heart, and Allah Almighty ordered His servants to lower their gaze {Tell the believing men to lower their gaze (from looking at forbidden things), and protect their private parts (from illegal sexual acts). That is purer for them. Verily, Allâh is All-Aware of what they do} [Surat An-Nur 24:30] 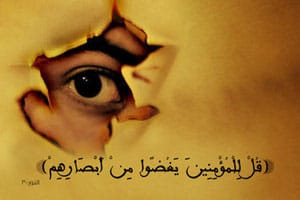 Sheikh Sayed Qutb says: “Islam aims to building pure community where lusts are not excited in every moment and the desires of flesh and blood are not agitated all the time, because the continuous excitation turns to be lustful frenzy that does not end or be satisfied.

Actually, the lustful look, the seductive movement, putting on make up to display the charms of the body, and the semi-naked bodies make nothing but irrigating this mad bestial frenzy.

Therefore, lowering the gaze is self’s good manner and effort for getting raised above the desire of looking at the charms and qualities of beauty in the faces and bodies. Moreover, it is locking for the first window of the windows of seduction and temptations; also, it is practical try for preventing the arrival of the poisoned arrow.

It is obligatory for the Muslim, if he saw what is made inviolable by Allah, to lower his gaze and not to follow the look with another one. Because of what was narrated by Jarir ibn Abdullah: “I asked the Messenger of Allah about the unexpected look, thereupon he ordered me to turn my gaze away.” [Reported by Muslim]

The evil of looking at what is inviolable:

Therefore, looking at the inviolable is reason for the loss of the worshipper and deteriorating the determination of the ascetic. The sane person should beware of looking at what is inviolable because it is the reason of the evils, the key of the lusts, and the vehicle of destruction and struggles; however, curing it at its beginning is possible and easy. But if it is repeated, the evil would take control and it would be hard to cure. (From the sayings of Ibn Al-Jawzy – in short)

Among the evils of looking at the inviolable:

It produces sorrows, sighs and anguishes; the servant sees what he is neither able to do nor able to forebear neglecting. Among the greatest kinds of torments is to see what you neither forbear neglecting it (totally or partially) nor have the ability to have it.

Whoever looks at the inviolable is like the person who drinks from the salty water of sea; could his thirst be quenched?! No, actually his drinking produces nothing but more thirst; by this look he does nothing but increasing the excitation of his desire. (Struggle with the desires)

Benefits of not looking at the inviolable:

Ibn Al-Qayim mentioned benefits for not looking at the inviolable; they include the following:

• Obedience to the order of the Lord (the Exalted and Glorious), which is the supreme happiness in this worldly life and hereafter too.

• It is prevention from the arrival of the effect of the poisoned arrow to your heart and causing its destruction.

• It produces, in the heart, feeling at ease with Allah and enjoyment is not experienced by whoever looks at the inviolable.

• It produces light in the heart, while looking at the inviolable produces darkness in it.

• It grants the servant with the truthful acumen that enables him to distinguish between the true and untrue, and between the veracity and lie.

• It produces courage and persistence in the heart. Moreover, Allah grants to such person the power of acumen and logic in addition to the power of ability.

• It makes the heart devoted to the good ideas.

It is said about look:

In the Holy Quran:

{Allâh knows the fraud of the eyes, and all that the breasts conceal} [Surat Ghâfir 40:19]

{And follow not (O man i.e., say not, or do not or witness not) that of which you have no knowledge. Verily! The hearing, and the sight, and the heart, of each of those one will be questioned (by Allâh)} [Surat Al-Isrâ` 17:36]

{Tell the believing men to lower their gaze (from looking at forbidden things), and protect their private parts (from illegal sexual acts). That is purer for them. Verily, Allâh is All-Aware of what they do} [Surat An-Nûr 24:30]

“Allah Has written upon the son of Adam his share from Zina (adultery/fornication), he will inevitably experience it, thus the Zina of the eyes is looking (at what is forbidden)…” [Reported by Al-Bukhari]

It is narrated that Jarir ibn Abdullah said: “I asked the Messenger of Allah about the unexpected look, thereupon he ordered me to turn my gaze away.” [Reported by Muslim]

And among the sayings of the wise people:

• Look is one of the poisoned arrows of Satan.

• Look is the leader of lust.

• Forbearing lowering the gaze is easier than forbearing the pain of its consequences.

• Combating the moments (of evil) is better than the eternity of sorrows.

Compiled by the scientific department in Madar Al-Watan