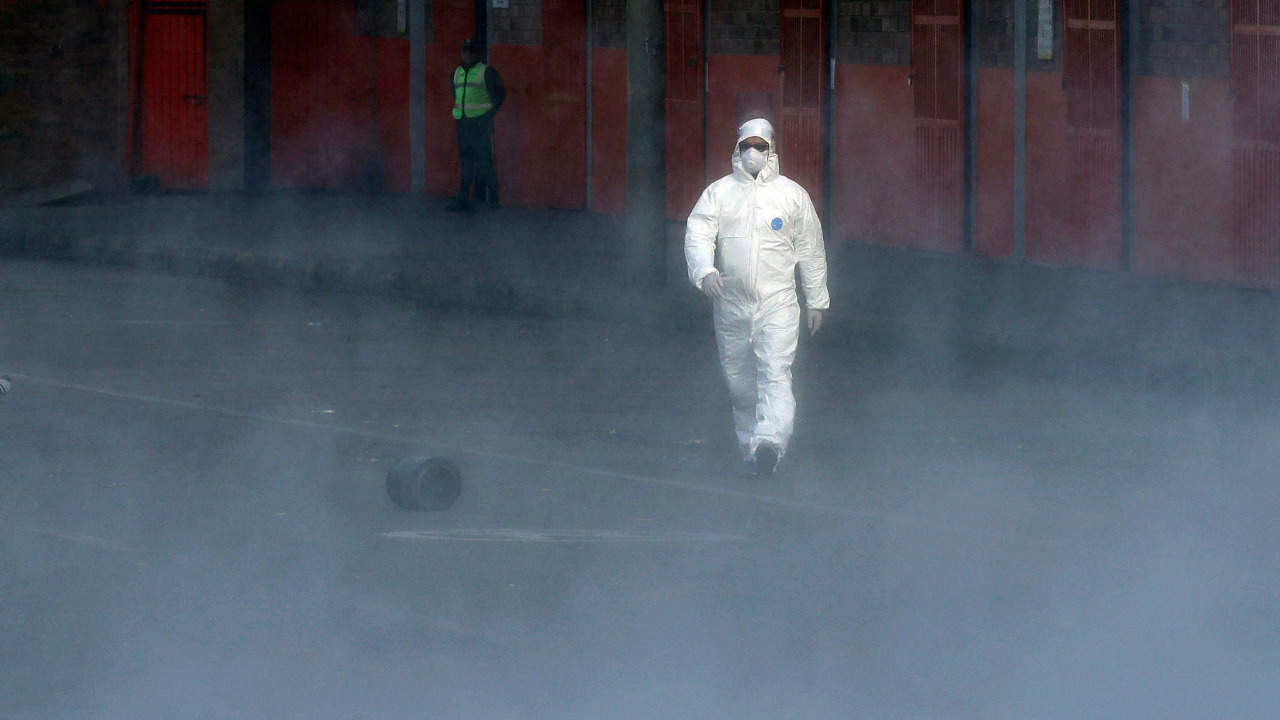 Science and scientific discoveries have been advanced, the medical field has been significantly and brilliantly developed, and medical science has known the different types of microorganisms which cause and transmit diseases.

A new and dangerous virus started to be exist in Wuhan (Chinese) city, and it was characterized by its rapid spread, known as "Corona Virus – Covid-19", and spread to several countries of the world, and the human movement in those countries began to fade, adhering to isolation and quarantine; which modern science has now decided it as the best solution to the epidemic. (1)

Everything that would cause a human gathering has been shut down, such as schools, factories, airports, conferences and places of worship, in order to warn against the transmission of this extremely small virus that is not visible to the naked eye, the numbers of infections increase in hours, so many lost their lives, the economic movement has been disrupted in major countries, and the wheel of natural life stopped, which spread fear and terror in the hearts of people, and after those countries were living a thriving life, life became stilled and people adhered to quarantine

And if the first town in which this epidemic originated adhered to applying the teachings of the Prophet of Islam Muhammad (peace be upon him), what happened to humanity would not have happened and this pandemic would not have spread.

The Prophet of Islam, Muhammad (peace be upon him), mentioned, more than 14 centuries ago, the rules of preventive medicine against epidemics, and he referred to quarantine upon the descent of the epidemic, also he warned against entering the patient on a sound person, and said (do not put a patient with a healthy person) (2), then he placed a wall around the town in which the epidemic originated, and commanded them not to leave it and also no one enters it from outside so that this epidemic would not spread in other countries – as it happens to us nowadays – and Prophet Muhammad (peace be upon him) also said "If you hear that it (plague) has broken out in a land, do not go to it; but if it breaks out in a land where you are present, do not go out escaping from it." (3)

And because of the importance of this matter, Prophet Muhammad stressed not to leave the place where the epidemic occurred and promised the reward of the martyrs to those who have patience during it, and woe and destruction to those who flee escaping from it. (4)

The prophetic miracle is evident here in preventing all persons residing in the land of the epidemic from going out, whether he is infected or not infected, as for the person with the disease, he does not go out to prevent transmitting the infection to others, but as for the uninfected one, what is the wisdom behind preventing him from going out?! Reason and logic make it imperative for a healthy person in the land of infection to flee himself to another country free from the epidemic, in order not to become infected, and in that there is a miracle and great wisdom which were never realized except after the development of science and the progress of medicine and the discovery of hidden worlds of microorganisms which can never be seen by the naked eye, so that scientific studies have proven that a healthy person may be a carrier of the epidemic microbe without showing symptoms of the disease, and then transmit the infection to others, thus posing a real risk in the transmission of the epidemic to other countries.

Because there is a period of so-called incubation period for the disease, which is the period of time that begins from the entry of the virus to the body until symptoms appear, it differs according to different diseases, it may be short, such as influenza incubation which takes one or two days, or it may be medium, such as Coronavirus – Covid-19 which takes 14 days. And it may last up to six months, such as viral hepatitis, so viruses remain in the body during this period of time infecting others, without the patient showing any symptoms until long after. (5)

This has been pointed out by studies conducted by scientists, which have proven that the cause of the spread of the virus was due to people carrying the virus without showing clear symptoms, and the infection would spread widely. (6)

If the city, which the Coronavirus was released from, adhered to these prophetic instructions, it would not have spread in the world. Who would inform Muhammad (peace and blessings be upon him) about all of it more than 14 centuries ago?!

Professor Craig Considine says, "Do you know who suggested good hygiene and quarantine during the epidemic? Muhammad the Prophet of Islam, 1400 years ago, although he was never a traditional expert in matters of deadly diseases, but Muhammad (peace be upon him) had good advice to prevent epidemics such as Covid-19" (7)

The beauty of the Islamic legislation appears when it makes isolation and quarantine an act of worship, legislation when infectious epidemics spread, and a command everybody should adhere to so that epidemics do not spread. Even though the concern for life is an innate matter, but there is a difference between the one who does it just because of fear and who does it out of  belief and faith, responding to the command of Allah and His Messenger and anticipating the reward from Allah the Almighty.

Moreover, this virus emerged from a country that eats dead and evil things, and Islam forbids eating them, Allah the Almighty says, “Forbidden to you (for food) are: Al-Maytah (the dead animals – cattle-beast not slaughtered), blood, the flesh of swine” [chapter 5 – verse 3] and the Almighty also said, “he allows them as lawful At-Taiyibat [(i.e. all good and lawful) as regards things, deeds, beliefs, persons, foods, etc.], and prohibits them as unlawful Al-Khaba'ith (i.e. all evil and unlawful as regards things, deeds, beliefs, persons, foods, etc.” [chapter 7 – verse 157]

Also, Islam, that Muhammad (peace be upon him) brought into practice, established the rules of hygiene on a personal level, and made it a half of faith and called it (purity), Allah the Almighty says, “Indeed, Allah loves those who are constantly repentant and loves those who purify themselves” [chapter 2 – verse 222]
Every day and night, Allah prescribed ablution 5 times upon Muslims, which is "washing the hands, face, and feet and rinsing the mouth and nose and wiping the head ", and obligated upon them to avoid impure things and wash their private parts in addition to many other precise regulations which fix and organize human life and have no other like in any legislation, belief and religion. (8)

And with all of what are mentioned above, Muhammad (peace be upon him) built for the Muslim a strong belief based on the good trust and relying upon Allah, taking the necessary means which, after all of that, lead him to have a certainty and belief that he will not be befallen except by which Allah has decreed for him, and that if something, Allah decreed strikes him and he anticipated the reward, he would have a great reward and therefore he will have tranquility and reassurance that good awaits him, so his matter is not like that of another one who is despondent, frustrated and frightened, who does not know where the destiny is. That is why you find the Muslim so strong and not afflicted by what may afflict some others of the panic and fear that may lead to suicide.

In addition to this, what Muhammad (peace be upon him) instilled in the hearts from safety by informing that all epidemics and diseases of their diversity and multiplicity have a medication when he said “Allah does not send down any disease, but He also sends down the cure for it.” (9) and thus the soul reassures looking for the cure with all hope and certainty, unlike the one who does not have this strong and perfect belief who may experience despair about not finding a medicine, and therefore there is a far difference between him and the one who has certainty and faith in existence of a medication but he has to search and explore. (10)

These meanings and many other authentic evidences which everyone attests are facts which witness to the Prophethood of Muhammad (peace be upon him).

So, when reflecting upon what Muhammad (peace be upon him) brought to us, a sound mind cannot do anything except acknowledging the existence of Allah the All-knowing, and the Prophethood of this great man, Muhammad (peace be upon him). Lamartine said "the greatest event in my life is that I studied consciously the life of the Messenger of Allah, Muhammad, and realized the greatness and immortality in it, and who would dare to liken Muhammad to any other personality in the history?! And who appears greater than him when looking at all the measures by which person’s greatness is measured?" (11)

References
1- All scientists and experts specializing in the transmission and impact of epidemics, including Dr. sanjay gupta and Dr. anthony fauci, have agreed that good hygiene or practicing quarantine is the hope to prevent the spread of infectious diseases and the most effective tool for containing Covid-19, website: https://www.newsweek.com/prophet-prayer-muhammad-covid-19-coronavirus-1492798
2- Al-Bukhari (7/138)
3- Al-Bukhari (7/130)
4- Ahmad in his Musnad (23/159)
5- See: "infection between medicine and the hadiths (sayings) of the Prophet" (al-adwa bayna at-tib wa ahadith Al-Mustafa) by Dr. Muhammad Al-Baar.
6- According to studies confirmed by American "Cleveland Clinic"
7- An article published in Newsweek magazine https://www.newsweek.com/prophet-prayer-muhammad-covid-19-coronavirus-1492798
8- All these preventive means of hygiene in Islam "aim to clean the foci and concentrations of microorganisms in human bodies on the skin and throat…etc.". For further reading, see: "preventive medicine and microorganisms" (at-tib al-wiqa'i wal-ka'inaat al-daqiqa) by Dr. Abdel-Jawad As-Sawy (36) & see: "the superiority of preventive medicine of Islam" (tafawooq at-tib al-wiqa'i fil-Islam) by Dr. Abdel-Hameed Al-Qudaah (7-21).
9- Al-Bukhari (7/122)
10- For further reading and details in the beauties of Islam in this regard and others, see an article by Dr. Sultan Al-Omayry entitled "the beauties of Islam at the time of epidemics", website: https://telegram.me/s/s_alomaire
11- "Travels in the East" by Lamartine.