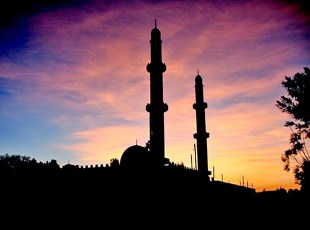 The Muslim ummah is vital, caring, and fruitful. Its still retains its youthful vitality. With Allah’s help, it is able to compensate for the deficiencies that come over

it in every age. Nations rise and fall. Personalities come and go. Great works, schemes, and projects fall to dust. However, the Muslim ummah remains.

The destiny of Islam is intrinsically tied to the destiny of the Muslim ummah. It is not tied to the destiny of any individual, group, organization, or country. Islam is greater than all of that. It is a mistake to tie the future of Islam – or of Islamic work – to the fate of some group or another. Likewise, it is wrong to regard the future of Islam in light of the contributions of a certain individual or to the continuation of some activity that we believe to be beneficial and productive.

No doubt, there are many contributions being made by many people that have a clearly positive effect in the advancement of Islamic work. However, all of these things are but means that are not irreplaceable. A person might die and the Muslim ummah will live on, and Allah may replace that person with even better people.

It is injurious for people to tie the future of Islamic work to any specific individual, no matter how highly people might hold him in their esteem. Every person is but a mortal human being with limited potential. He is prone to make mistakes as well as to be correct. He is subject to the influences that surround him, whether they be social, economic, political, or personal, and he cannot escape them. Many people clasp their hands over their hearts and fear that a certain beneficial door or pathway will become blocked, or that some orator will not be able to ascend the pulpit and speak, or that some writer not be able to write. We need to ask such people: What is it then? How many are the orators, writers, and Islamic workers that Allah has at His disposal. How many are the pathways to good that are at our disposal.

The Muslim ummah is something bountiful and fertile. If one voice becomes silent, there are a thousand voices behind it to take its place. If one orator dies, Allah will bring forth a thousand others like him.

By vesting our hopes in personalities, we place too much upon their shoulders and, whether we like it or not, we end up stifling a lot of potential for goodness that our ummah can bring forth. Who out there can carry the future of Islamic work upon his shoulders as if he is its living embodiment?

We do justice to consider each person in his natural place and keep our perspectives from becoming distorted. No one needs to be slighted or denied the credit that they and their contributions are due. At the same time, we should not elevate anyone above their true worth and expect from them what they are unable to deliver.

In times of weakness and decline, it is easy for people to seize upon anything near at hand that they find to be strong and then pin upon it all of their hopes. This is why we see many good people shrinking away from the public and electing to remain silent, simply because they cannot bear the burdens and that the people foist upon them because of their working for Islam. They cannot handle being put in such a position of absolute accountability.

Allah says:
“Every soul is held in pledge for what he earned.” [Sûrah al-Tûr: 21]

“Every soul is held in pledge for what it earned.” [Sûrah al-Mudaththir: 38]

“And We have made every man’s actions to cling to his own neck.” [Sûrah al-Isrâ’: 13]
From what verse of the Qur’ân are some people today getting the idea that for a person to be something he has to be everything? Where do they get the idea that all responsibility should be foisted upon the shoulders of a few people so that everyone else can be relieved from carrying theirs?

The only difference between the person who is carrying out this work and the rest of the people is that we have one person who is doing his duty and the rest who are failing to do theirs. So may Allah reward the one who is fulfilling his duty and may He bless his work. However, the basic accountability upon all the people is the same. It may be that those of us who are not mobilizing ourselves have greater natural talents and stronger personalities than those who are doing so. Why should we forget ourselves and bury our own talents? Why should we not ourselves assume what others have neglected or have failed to carry out in the fullest possible manner?