‘Aa’ishah (RA) said: “The Messenger of Allah (SAW) said: ‘When Allah (SWT) wills some good towards the people of a household,

According to another report:

“When Allah loves the people of a household, He introduces kindness among them.” (Reported by Ibn Abi al-Dunya and others; Saheeh al-Jaami’, no. 1704)

In other words, they start to be kind to one another. This is one of the means of attaining happiness in the home, for kindness is very beneficial between the spouses, and with the children, and brings results that cannot be achieved through harshness, as the Prophet (SAW) said:

“Allah loves kindness and rewards it in such a way that He does not reward for harshness or for anything else.” (Reported by Muslim, Kitaab al-Birr wa’l-Sillah wa’l-Aadaab, no. 2592)

Helping one’s wife with the housework

Many men think that housework is beneath them, and some of them think that it will undermine their status and position if they help their wives with this work.

The Messenger of Allah (SAW), however, used to “sew his own clothes, mend his own shoes and do whatever other work men do in their homes.” (Reported by Imaam Ahmad in al-Musnad, 6/121; Saheeh al-Jaami’, 4927).

This was said by his wife ‘Aa’ishah (RA), when she was asked about what the Messenger of Allah (SAW) used to do in his house; her response described what she herself had seen. According to another report, she said:

“He was like any other human being: he would clean his clothes, milk his ewe and serve himself.” (Reported by Imaam Ahmad in al-Musnad, 6/256; al-Silsilat al-Saheehah, 671)

She (RA) was also asked about what the Messenger of Allah (SAW) used to do in his house, and she said,

“He used to serve his family, then when the time for prayer came, he would go out to pray.” (Reported by al-Bukhaari, al-Fath, 2/162).

If we were to do likewise nowadays, we would achieve three things:

* We would be following the example of the Prophet (SAW).

* We would be helping our wives.

* We would feel more humble, not arrogant.

Some men demand food instantly from their wives, when the pot is on the stove and the baby is screaming to be fed; they do not pick up the child or wait a little while for the food. Let these Hadith be a reminder and a lesson.

Being affectionate towards and joking with the members of the family

Showing affection towards one’s wife and children is one of the things that lead to creating an atmosphere of happiness and friendliness in the home. Thus the Messenger of Allah (SAW) advised Jabir (RA) to marry a virgin, saying,

“Everything in which Allah’s name is not mentioned is idleness and play, except for four things: a man playing with his wife.” (Reported by al-Nisaa’i in ‘Ushrat al-Nisa’, p. 87; also in Saheeh al-Jaami’)

The Prophet (SAW) used to treat his wife ‘Aa’ishah (RA) affectionately when doing ghusl with her, as she (RA) said:

“The Messenger of Allah and I used to do ghusl together from one vessel, and he would pretend to take all the water so that I would say, ‘Leave some for me, leave some for me,'” – and both of them were in a state of janaabah (impurity). (Muslim bi Sharh al-Nawawi, 4/6). 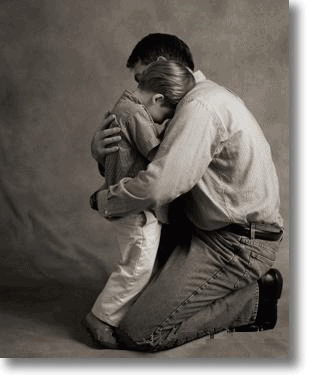 The ways in which the Prophet (SAW) showed affection towards young children are too famous to need mentioning. He often used to show his affection towards Hasan and Husayn, as mentioned above. This is probably one of the reason why the children used to rejoice when he came back from travelling; they would rush to welcome him, as reported in the saheeh hadith:

“Whenever he came back from a journey, the children of his household would be taken out to meet him.” He (SAW) used to hug them close to him, as ‘Abd-Allah ibn Jafar (RA) said:

“Whenever the Prophet (SAW) came back from a journey, we would be taken out to meet him. One day we met him, Hasan, Husayn and I. He carried one of us in front of him, and another on his back, until we entered Madeenah.” (Saheeh Muslim, 4/1885-2772; see the commentary in Tuhfat al-Ahwadhi, 8/56).

Compare this with the situation in some miserable homes where there are no truthful jokes [i.e., jokes that do not involve lying], no affection and no mercy. Whoever thinks that kissing his children goes against the dignity of fatherhood should read the following hadeeth: from Abu Hurayrah (RA) who said:

‘The one who does not show mercy will not be shown mercy.'”