“The one who is content and pleased that Allah is his lord and Islam is his religion and the prophet Mohammad is his messenger shall taste the sweetness of faith.” (Prophet Muhammad)

Faith has a taste and the heart tastes it the way the mouth tastes food and drink.

What makes the believer sacrifice everything for the sake of religion is the sweetness of faith, just like when someone has the blue prints of a magnificent palace that has huge rooms and big lobbies, this palace is but blue prints that were prepared by engineers, but the one who owns the drawings doesn’t even own a cottage to live in.

The sweetness of faith is to own that palace and to live in it.

There is a big difference between one who owns the palace and he who owns only the drawings, and what attracts the attention is that the noble companions of the prophet achieved victory in a short period of time and they made miracles and they moved from grazing sheep to leading nations.

Although you see the Islamic appearances are very obvious nowadays but still the milliard and the three hundred million Muslims have no importance (or weight) although they are the third of the inhabitants of the world.

The Cost of the Sweetness of Faith

Anas ibn Malek narrated that the Prophet, peace be upon him, said:

“Three qualities that if a person has, has indeed found the sweetness of faith:

The one to whom Allah and His Apostle become dearer than anything else, the one who loves a person and he loves him only for Allah’s sake, and the one who hates to revert to disbelief (Atheism) after Allah has brought (saved) him out from it, as he hates to be thrown in fire.” (Ibn Majah)

When you prefer the obedience of Allah to your current interests, you pay one of the prices of the sweetness of faith.

You may travel to a far country to study, you find if you buy a house and you pay its price by usurious installments, the price of this house is a debt, you pay its installments and because you have a debt you don’t pay taxes and when you own it you feel comfortable and all of your interests are through this usurious debt. However, if someone else finds the usurious installments are prohibited, therefore he rents a house and he is threatened to be out of the house any time and he should pay the taxes.

The second condition is the one who loves a person and he loves him only for Allah’s sake. Man, according to his nature, loves the rich and the powerful, the powerful people support him, and the rich people shower him with their money. But if he has a poor relative who is a forgotten righteous believer; therefore when the believer builds his relations on the base of faith he sticks to the believers even if they are weak and poor and renounces the disbelievers and the infidels even if they are rich and powerful, he pays the second condition of the sweetness of faith.

Notice, a house contains all the electric appliances, a refrigerator, air-conditioner, heater, and recorder, but with no electricity all of these appliances have no meaning but they turn to be a burden, they take up place but when the electricity comes every appliance has a meaning, the refrigerator conserves the foods, the air conditioner provides you with cold air.

When you taste the sweetness of faith, you find meaning to your marriage. You see all the marital relations are bad between spouses everyone gets bored from his or her mate because there is no sweetness of faith, then the marriage has no meaning, the son becomes a burden to his parents and causes them sadness.

The second condition to build your relations on loyalty and honesty, to be friend to a weak poor believer, you love him, visit him and welcome him, and you abstain from having relations with the corrupted people, you love believers even if they make mistakes and you may get some harm from them but you stay with them; the honest believer stays with the believers and abstains from the infidels even if they are able to profit him.

From the signs of the weakness of faith, dear brothers, is the one who worships Allah as it were, upon the very edge (i.e. in doubt); if good befalls him, he is content therewith; but if a trial befalls him, he turns back on his face (i.e. reverts back to disbelief after embracing Islam). He loses both this world and the Hereafter.

If things go the way he likes he is content to be a believer but when trouble befalls him, he turns back to disbelief. When you love Allah and His messenger and follow His doctrine in the Quran and sunnah, and when the doctrine contradicts with your interests, and when you stay attached to believers and you renounce the disbelievers and the infidels, almighty Allah said:

When you are not affected by the ups and downs of the worldly life, you give everything whether in poverty or in wealth in health or in sickness in residence or in travelling before marriage or after marriage, almighty Allah said:

{Men whom neither trade nor sale diverts them from the Remembrance of Allah (with heart and tongue), nor from performing As-Salat (Iqamat-as-Salat), nor from giving the Zakat. They fear a Day when hearts and eyes will be overturned (from the horror of the torment of the Day of Resurrection.} (24:37) 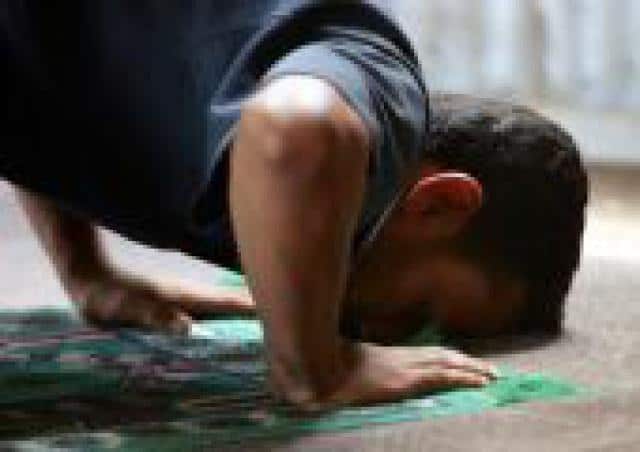 There is a big difference, if you own it you live in a magnificent house with an expensive car and you may buy an airplane and yacht. The Islamic world speaks about the facts of faith but because they don’t pay its price they don’t taste the sweetness of faith.

Umar (may Allah be pleased with him) said: “If the whole worldly life from its beginning to its end was given to a man, then death comes to him he is like the man who had pleasant dreams then when he woke up he found nothing”.

Man considers himself smart if he collects money, whereas the believer who tastes the sweetness of faith considers himself smart when he spends the money, he builds his life on giving, the first one builds his life on taking. If your measures didn’t reverse then you didn’t taste the sweetness of faith, you become happy when you give not when you take.

The last idea, you don’t get attracted to religion because it gives you an explanation about the universe, life and humans or because of the religious thinking but because of the sweetness of faith, you live a life that you never imagine, but you should pay the price.

A man went to the biggest shop that sells carpets and he said: “I want a first-class carpet,” The salesman showed him a carpet worth eight hundred thousand pounds, yet he offered to pay five Syrian pounds, could this man get out of the shop safe?

Some people want to achieve paradise by two rakahs (prostration) without ablution, and by spending two pounds to the poor, that is the situation of Muslims, and one of the sins is to ask for paradise without paying its price, verily the goods of Allah are expensive.